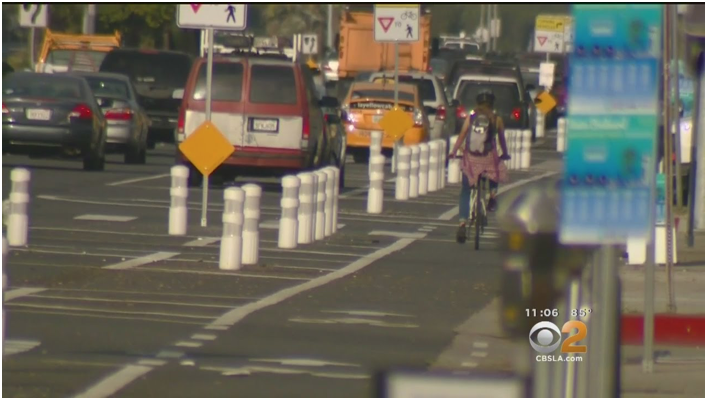 VOICES-- In its new budget, the Los Angeles City Council is throwing another $91 million of taxpayer dollars into road diets ignoring the fact that Venice Boulevard --  the plan’s “poster child” – has proven to be an Epic Fail during its year-long pilot test, according to data from the city’s own Department of Transportation.

Time’s up, Mayor Garcetti and Councilman Bonin. You promised to return Venice Boulevard to its previous configuration if a one-year pilot project didn’t work.  It clearly hasn’t.  May 20 is the one-year anniversary and it’s time to keep your word and restore Venice Boulevard.

The road diet impacts Venice from Inglewood Boulevard to Beethoven Street and was installed under the guise of making the street safer for pedestrians, bicycles and cars.

Statistics from the Los Angeles Department of Transportation during the first six months of the road diet trial, the only data now available:

These numbers are in spite of the fact that the number of cars traveling Venice Boulevard has dropped substantially since the road diet reduced lanes by one-third, causing gridlock and forcing drivers to find alternate routes. Currently 31,000 vehicles a day travel the street, down from 37,000 a day per LADOT or down from 45,500 a day using CalTrans data.

Our bike lanes were working well and there were few complaints from bikers.  Now there is concern because drivers can’t see bikers behind parked cars due to the reconfigured parking lane and there have been 15 cyclists involved in accidents in the new protected bike lane.

No one is happy with today’s state of Venice Boulevard,” reports Inouye.

Traffic, like water, chooses the path of least resistance.  And that’s what is happening to our community.

Businesses, who were told that Venice Blvd. was going to be beautified, are losing business as drivers can’t make heads or tails out of the confusing mess of bollards and lane markings.  Bikers and skateboarders are vying with pedestrians for sidewalks.  Sidewalks were supposed to be repaired but have not been or only partially restored.  Formerly quiet neighborhoods are now posting signs to keep the hordes of cut through drivers off their streets.

Let’s not waste any more taxpayer money on this failed concept. Mar Vista and our neighbors have suffered with this for a year. It’s time to restore Venice Boulevard and give us back our community.

(Selena Inouye is chief grassroots organizer for Restore Venice Boulevard. She can be reached at: 424-326-3666.)