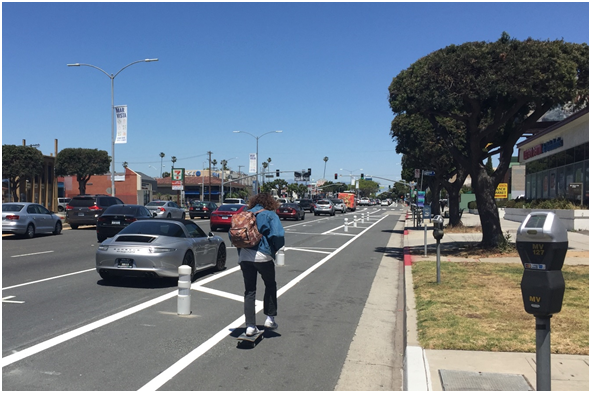 ALPERN AT LARGE--There's been a lot of increases in the Mar Vista region (which is smack dab in the center of the Westside), and a lot of decreases as well.  We've got increased commute times, increased cut-through traffic through residential neighborhoods, potentially an increased response time for first-responders, and certainly an increased division among neighbors, thanks to "the Road Diet".

You know, the Road Diet on Venice Blvd., which was once a secondary state highway, until the City stole the plans for a beautification project worked on by the community for 15 years (and ostensibly the reason for City takeover of the highway, for maintenance and upgrade reasons) and created a lopsided plan that has thrown the region into turmoil.

And, of course, there is decreased propaganda from the City, and now a no-holes-barred stonewalling, of the data promised many months ago both to the residents, the neighborhood council, and to the neighborhood associations of Mar Vista.  The FOIA request for data?

I'd joke about converting the I-10 or 405 freeways into a mixed car/bicycle corridor, taking away one lane for bicycles...but I'm sure that The Smart One, Nat Gale, and Mayor Garcetti would fight for that, too, just to show how "woke" they are...so let's just keep that crazy idea as one that would best be avoided at all costs to avoid bloodshed and traffic nightmares on our freeways.

Because the Venice Blvd. Road Diet, at best, has had NO impacts on bicycle or pedestrian safety, and at worst has made it WORSE.

But at least we can demand the full data, right?

Because the longer it takes to get that data, the less credible and more suspicious it will be when the numbers DO arrive...which is usually what happens when you have a LADOT that's been politicized and agendized, and which has been led by liars and propagandists at the Mayor's behest and fiat.

There IS some good news, though:  the same divided neighborhood council of Mar Vista, the Mar Vista Community Council (MVCC), has thrown up to $10,000 or maybe more at the CD11 and CD5 offices in the hopes that high-visibility crosswalks and safety/street improvements for pedestrians (particularly schoolchildren) with these inexpensive infrastructure improvements.

It is hoped that CD11 and CD5 Councilmembers Mike Bonin and Paul Koretz, and their local deputies Hannah Levien and Joseph Galloway, will match the funds allotted by the MVCC to expedite these crosswalks and road improvements out of district and City funds, just as the MVCC and CD11 office worked together to expedite previous infrastructure upgrades.

Because all of the MVCC, and all of the community, wants safe roads and sidewalks and crosswalks for pedestrians and bicyclists.

And because all of the MVCC, whether they think the Road Diet on Venice Blvd. is a good idea or bad idea, wants data that has been promised, and is essential, to ensuring that the infrastructure and funds of the City goes to promoting safety and mobility for all residents of the City of the Angels.