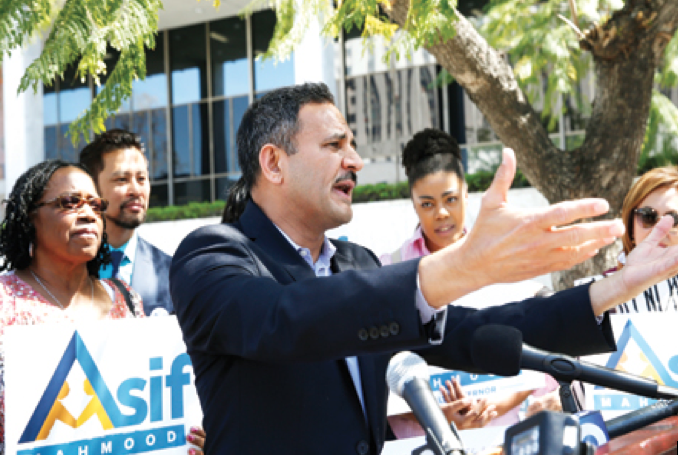 BCK FILE-When Dr. Asif Mahmood decided to throw his hat in the ring, he pledged “not to take a penny from insurance or pharma or tobacco, which place an obstruction between the common man or woman and their right to healthcare.”

The practicing physician’s knowledge of healthcare comes from the frontlines where early diagnosis can make a difference for patients, their families, and may even decrease the overall cost of care.

For healthcare to work, it must be “affordable, accessible, and top quality” -- and these are the tenets behind Mahmood’s platform.

The first priority is delivering basic healthcare to patients, including blood pressure and diabetes checks. Secondly, the physician says he plans to focus on affordable mental healthcare, which doesn’t currently exist. “One in six has a mental health issue and that statistic is growing,” he explains. “Many times, coverage only exists for 30 days. We really want to focus on mental healthcare services, especially for first responders who have really stressful jobs. We’ve worked very hard over decades to change this and we want to move forward.”

With maternity coverage in flux, the physician says it’s essential to make sure pregnancy-related conditions are covered, including pregnancy hypertension, eclampsia, pre-eclampsia, and post-partum depression, as well as premature delivery. “When a woman is expecting a baby, nobody wants the baby not to be healthy, but tests are not necessarily standard. Sacramento can’t provide helpful regulations without someone who has been on the ground dealing with actual patients,” he says. “Our president is still bringing attacks against a woman’s right to choose and there are insurance policies that do not cover contraceptives but do cover Viagra and Cialis. We need somebody who really understands the real healthcare system, and also, the specific healthcare needs of women and children, as well as mental health.”

Making sure children are insured is a crucial issue to California where the doctor says six percent of children are not covered. “When children are not getting regular physicals, nobody is tracking mental, psychological, and developmental growth. Kids are not getting the vaccines they need. We really need to focus on all of these issues, from children’s health to reproductive care and mental health services.”

Dr. Mahmood says there’s a big fight ahead. He’s ready and able to convene a group of doctors from all over the state to cut costs on both the drug and insurance fronts. He believes a plan like Medicare for all may be one way to accomplish that.

“I’m full of passion and if I didn’t think this was possible, I wouldn’t be here talking,” he says. “I am doing this because I have determination to fight for what is right. The same drug that costs $1 in Mexico costs $100 here. I’m not against a decent profit and it’s possible for businesses to flourish but not [put] the state of people’s lives at risk.”

“The same can be said about insurance companies who pay out millions in bonuses but try to prevent patients from seeing a doctor or going to the hospital. They’re cutting medication or services like physical therapy and rehab. They’re cutting out home support and nursing home coverage. All these people are working on one scenario, to save money. For insurance companies and pharma, it’s dollars and cents.”

“I want to put healthcare back in the hands of doctors who care about patients feeling better and healing. Medicine is no longer only about being compassionate and treating but half the time is spent fighting the insurance companies about a procedure that isn’t covered or is taking too long to authorize. Two weeks ago, I had a patient I’ve been following for nine years come in. He was nervous because his prescription for cholesterol drugs had increased from $45 to $245 a month and he was on a fixed income. I fought a week to resolve. This happens every day.”

“Traditional politicians won’t help. They haven’t argued with insurance companies and don’t know how or what to do. Healthcare is not a commodity. If we put our healthcare plan in the right direction, we can keep costs down. People won’t end up in the ER with heart attacks if we have preventative care. It costs more to go to the ER than it does to go to the doctor.”

Preventative care, he adds, is essential to saving money and keeping people healthy. Type 2 diabetes can be controlled with diet and exercise intervention, reducing risk for renal failure, heart attacks, and stroke. “We’ve seen healthcare costs go up every year,” he notes. “Interestingly, profits for insurance and pharma also go up every year while quality is going down. We know at some point, someone needs to reign this in.”

Does Dr. Mahmood believe insurers will leave the state? “We’re the third largest insurance market in the world,” he says. “They’ll never leave California. They bring in more money here than they do in half of the U.S. The system as it is creates problems for patients, including in the workers compensation and disability system where patients are forced to cross state lines for care.”

Providing coverage for all is an essential belief of the physician. “I am from a religion where we believe if your neighbor goes to sleep hungry, we are doing a bad thing. We must all work for the betterment of everybody. We can have a nice house, nice food, a nice car but our biggest legacy is that we leave the world better for our children, a clean ocean, water, air. These are our obligations, to leave the world in better shape for our children and our children’s children. We can’t just think of this in dollars and cents.”

(Beth Cone Kramer is a professional writer living in the Los Angeles area. She covers Resistance Watch and other major issues for CityWatch.) Edited for CityWatch by Linda Abrams.