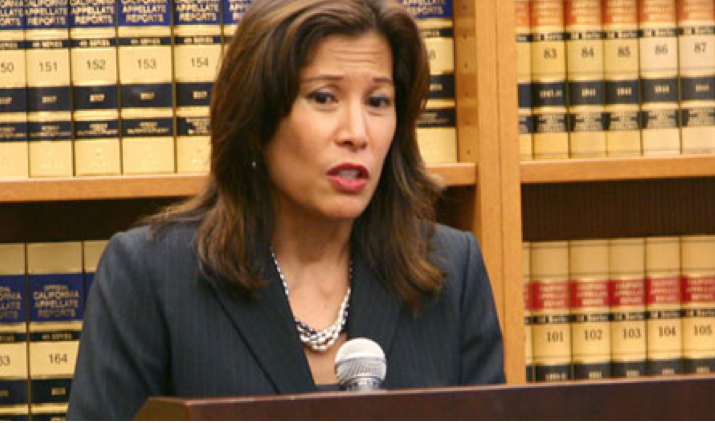 CORRUPTION WATCH-In Snow White, the Wicked Witch asked, “Mirror, Mirror on the wall, who in the land is fairest of them all?”

We all know that she was the most detestable of all, but it was a show of her power that the mirror would say she is fairest of them all. Demanding obsequious obedience is a characteristic of vicious predators and there is no greater predator in society than the judiciary. They even have rules against criticizing them when they hold little children ransom and destroy families so they can pry a few more dollars out of grieving parents.

Destroying the lives of children and bankrupting their parents is how the courts operate and woe to anyone who stands between a Family Court judge and his payday. The Chief Justice of the California Supreme Court Tani Gorre Cantil-Sakauye was formerly involved in the Family Law division of the Sacramento Superior Court. For years people have been writing about how she destroyed the lives of children for fun and profit. Judges, sad to say, have civil and criminal immunity for actions they take as part of the cases they handle.

In January 2015, federal Judge Alex Kozinski, along with Judge Kim Wardlaw and Judge William Fletcher, criticized the entire California state judicial system for creating an epidemic of misconduct by turning a blind eye to outrageous behavior by lawyers, and especially by prosecutors.

One could easily see that the California Chief Justice was in the federal court’s cross-hairs since she not only had a lurid history of personal misconduct, but she had been Chief Justice for about four years and the situation was becoming worse. A family court judge who ruins a family is the same odious person when he or she is assigned to criminal court.

Last week more than three years after Judge Kozinski’s criticism, the ACLU filed suit against the Orange County District Attorney’s Office and the Orange County Sheriff’s Department for the systematic use of lying jailhouse informants – the very evil about which the federal courts had complained over three years ago. The question of what kind of person the California Chief Justice is for allowing these outrageous violations to continue is rhetorical; the answer unprintable.

The ACLU filed its lawsuit because the misconduct is worse. "The defendants' efforts to deny its existence — and, when forced to confront reality, to minimize and excuse it — make it clear that this lawsuit is necessary to restore integrity to Orange County's criminal justice system," said Jacob Kreilkamp, a partner with Munger, Tolles & Olson LLP and one of the attorneys supporting the lawsuit, in a news release in the Voice of OCon April 5, 2018.

The saying, “a few rotten apples spoil the barrel,” does not apply to the California judiciary. Rather, the entire barrel stinks with one or two exceptions. Do not expect the honest judges to remain around for long. One Orange County Superior Court judge tried to stop the behavior as did the Fourth Appellate District. But they failed, and the judicial miscreants still sing the hymn, “Oh, what a friend we have in Sakauye.”

Judge Thomas Goethals acted against the unconstitutional use of jailhouse informants. Judge Goethals is now off the bench; Jerry Brown put Goethals out to pasture by placing him on the Fourth Appellate District. Do not think that this was a promotion? If there is one thing the California courts will not tolerate it is a judge with integrity.

As the Orange County Registerreported on April 8, 2018, Judge Goethals’ courtroom was often empty since so many OC prosecutors would “170.6" him from their cases. (Attorneys get to veto one judge.) Then, the DA gets assigned to another judge. The logical inference from the practice of 170.6ing Judge Goethals is that the DA’s Office knew that the other judges would go along with their falsification of evidence. If Judge Goethals can spot DA misconduct, the other judges recognize it. This is an understandable situation; many people have jobs requiring specialized knowledge and can spot it when someone is screwing up. The same with judges. They know. Besides, why else do you think the sheriff’s department does so much free work on home-remodeling for judges?

On May 22, 2017, Todd Spitzer, Orange County Supervisor for the 3rdDistrict, wrote to the Department of Justice, requesting that the U.S. Attorney General take over the OC District Attorney’s Office by consent decree, pointing out that the type of abuse Judge Goethals exposed was “pervasive” and “not limited to the ‘snitch scandal.’” Was Supervisor Spitzer blown off or is something in the works?

They say that the best way to rob a bank is to own a bank; the best way to rob society is to own the court system. The public is less than clueless about the billions of dollars which are being stolen by the corrupt judicial system. No one should think that those in power will be voluntarily relinquishing their death grip on the California judicial system and the billions of dollars it nets them.

The only person who could make a difference is Gov. Jerry Brown who has the Munger Tolles report on this desk and who knows that the Chief Justice needs to be removed. Gov. Brown is in a political jam – the Obama Administration never would have supported his moving against their vassals in the California judiciary, but his joining Supervisor Spitzer in asking Attorney General Sessions to intervene is likewise unpalatable.