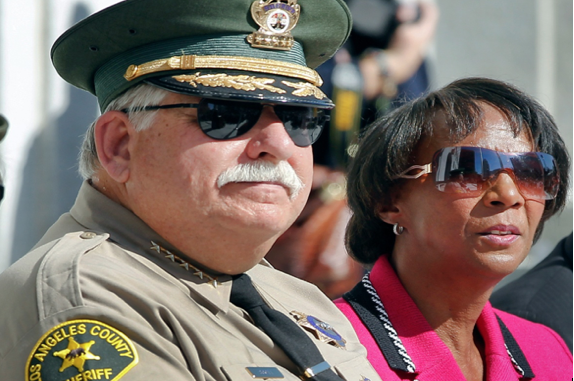 CAPITAL & MAIN REPORT--Up to a million Californians have been convicted of crimes that may no longer exist. Those convictions remain on their records, however, and removing them — especially in Los Angeles County — may take years. Proposition 64, the voter-approved 2016 ballot measure, legalized the recreational use of marijuana and reclassified most state-level felony cannabis offenses as misdemeanors. Some misdemeanors were reduced to mere infractions.(Photo above: Los Angeles District Attorney Jackie Lacey with interim L.A. County Sheriff John Scott, in 2014)

This change in the law means that many of those who have a cannabis conviction on their records are eligible for resentencing. Some are even eligible to have old convictions expunged. The chance to remove or reduce existing criminal convictions represents an opportunity to erase an obstacle to finding steady employment or stable housing.

But now comes the hard part. Prop. 64 allows those convicted of a cannabis offense to petition a judge to have their old convictions reexamined. However, like most procedures in the criminal justice system, resentencing can be long and complicated, and takes time and resources that many people dealing with life after their convictions simply don’t have.

“Even under the new rules, there are still a lot of barriers for folks who have been affected by the criminal justice system,” said Eunisses Hernandez, a policy coordinator for the Drug Policy Alliance in Los Angeles, a group that advocates for the rethinking drugs as a health and non-criminal issue. “Where do you get a copy of your criminal docket? Will you be charged for getting copies of that document? What other documents do you need? Attorneys can charge people $2,000 to do an expungement, but lots of folks don’t have those resources.”

Consequently, while there may be as many as a million cannabis-related convictions eligible for resentencing in California, state statistics show fewer than 5,000 people initiated the process statewide during the first year of the new cannabis rules.

District attorneys’ offices in San Francisco, Alameda and San Diego counties have indicated their willingness to proactively comb through old cannabis conviction records. This review of records means that people with previous cannabis-related convictions in those jurisdictions will see their convictions reduced or expunged automatically.

But as San Francisco and San Diego counties moved forward with automatic resentencing, the Los Angeles District Attorney’s office balked. On February 2, District Attorney Jackie Lacey issued a statement saying, in effect, that people with convictions were on their own. Her statement also said that those most affected by these convictions should petition the court “rather than wait for my office to go through tens of thousands of case files.”

Lacey’s problem is one of scale. There are wildly varying estimates of marijuana convictions that should be expunged: San Francisco authorities have identified nearly 5,000 felonies alone, dating back to 1975, and Lacey’s office estimates that 40,000 felonies have been recorded in Los Angeles since 1993; L.A.’s public defender’s office claims there are about 200,000 felony and misdemeanor convictions in the county eligible for expunging. Going through those old case files and evaluating whether they qualify for resentencing or expungement takes time and resources that might not be immediately available.

Less than two weeks after Lacey issued her statement, however, the Los Angeles County Board of Supervisors unanimously passed a motion announcing that it intends to take steps towards the meaningful criminal-justice reform provided under Prop. 64. That motion, pushed by supervisors Mark Ridley-Thomas and Hilda Solis, instructs several county agencies, including the district attorney’s office, to collaborate and draft a plan for addressing the thousands of cannabis-related convictions in the county, as well as ensuring greater equity in the ever-evolving landscape of legal cannabis.

“The war on drugs led to decades-long racial disparities in cannabis-related arrests and convictions,” Supervisor Ridley-Thomas said when the motion passed. “We have a responsibility now to seek widespread reclassification and resentencing for those with minor cannabis convictions on their records, including the destruction of court records for youth.”

At the February board meeting, Supervisor Solis said she understands that “the district attorney’s office has concerns and some hesitation. The DA prosecuted more marijuana-related cases than any other jurisdiction in the state of California, and going through those case files would take a lot of time … I would urge our own DA to expand its role in helping people get their records expunged, and help them get their second chance in life. I believe that this board will support those efforts.”

“In response to the board’s motion, the District Attorney’s Office is committed to working with the Public Defender’s Office and other county departments to create an equitable solution that will make it easier for people seeking to reduce or dismiss prior convictions involving marijuana to get the legal relief to which they are entitled under Proposition 64.”

The goal, looking forward, is for the district attorney’s office, working with several other county agencies, to have a plan ready for the supervisors to consider by June. But exactly how the county is going to do that remains an open question.

“It would be best if the DA would take responsibility and reduce or reclassify the 40,000 marijuana felonies that currently exist in the system,” said the Drug Policy Alliance’s Hernandez.

For Jonatan Cvetko, founder of the cannabis advocacy organization Angeles Emeralds, “the best thing would be if people just get a nice letter in the mail saying, ‘Your record has been expunged. Have a nice day.’ Considering that San Francisco and San Diego are taking that route, there’s no reason in the world why Los Angeles County cannot be following suit.”

(Matt Tinoco is a journalist who grew up in Los Angeles. His work on various Los Angeles-related subjects can be found in publications like Mother Jones, Politico Magazine, the Los Angeles Review of Books and Curbed Los Angeles. This piece was posted earlier at Capital & Main.)