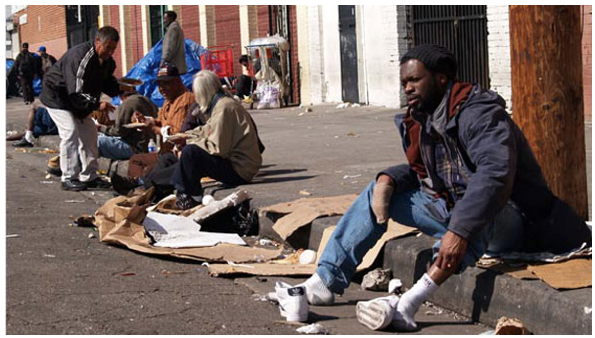 Skid Row, commonly known as “the homeless capitol of America”, has been long overdue for a UN visit (which consisted of a town hall meeting and a walking tour through the streets of Skid Row.)

During the Skid Row town hall meeting (which was held in the offices of the Los Angeles Community Action Network [LA CAN]), there were over 40 mostly grass-roots organizations who each had three minutes to speak directly to Mr. Alston (per house rules to allow each speaker equal time).

Because of the short amount of time, the town hall’s first speaker, Skid Row community activist General Jeff, was not able to complete his full presentation to the United Nations representative, who was appointed by the UN Human Rights Council.

“Recently, the current U.S. presidential administration proposed a $10.6 billion cut to the national education budget. This type of political undoing is consistent with the proverbial ‘dumbing down of the masses.’

“As a homegrown Angeleno who attended public schools in South Central LA, I know firsthand of the devastation that the intentional lapse in teaching has had, and obviously continues to have, on minorities in this, the world’s richest county.

“This blatant disregard to strive for maximum human evolution leads to what I describe as ‘underdeveloped normal brains.’ Without a proper education, it is virtually impossible for ANYONE to make intelligent decisions, thus reducing not only individuals but more importantly, disenfranchised communities to a perpetual state of dysfunction. This means individuals, families and communities all wallow in quicksand-equivalent dysfunctional environments that have ended up becoming generational in nature.

“Whenever education budgets are cut, students don’t get the necessary level of quality teaching they need. This creates a disconnect, most often in totality, from obtaining an ‘education-developed brain.’ History has shown that this type of ‘dysfunctional result’ can only be described as systemic oppression, directly attributed to the political acts enacted for the purpose of achieving  ‘desired outcomes’ by the powers that be.

“This, then, leaves each student to ‘fend for themselves.’ Combined with a disconnect from the school curriculum, the high school and middle school dropout rates have continued to steadily exist in concerning numbers for decades.

“Without a high-school diploma or GED, young students cannot get a regular job here in America. Thus, in order to survive, many turn to a life of crime. From short stints in jail to lengthy prison terms, the Prison Industrial Complex pipeline is then firmly constructed. Systemic oppression is squarely to blame.

“When people wonder why systemic oppression continues to exist, it must be realized that tens of millions of jobs are created nationwide, whether directly or indirectly connected to the PIC.

“When it comes to homelessness, a similar Homelessness Industrial Complex has also been created. Homelessness in America is a multi-billion-dollar industry.

“While one segment of the American population is reduced to a state of extreme poverty, another is automatically catapulted to economic stability via jobs in connected industries -- such as non-profit, law enforcement, judicial, medical, welfare and many more.

“This ‘designed connectedness’ can only be described as ‘the intertwining of oppressive industrial complexes’ which have now become America’s hybrid DNA.

“And because of it’s man-made design, combined with it’s extremely long-term existence over numerous generations, it automatically qualifies as ‘systemic.’ Period.

“With no end in sight, America seems destined to continue the inhumane living conditions for millions of it’s citizens. This equates to massive Human Rights violations, numerous Civil Rights violations and the newly-exposed, systemically-oppressing hybrid DNA molecules, a negative energy-based double helix that should appall the world.

“In conclusion, and on behalf of Skid Row residents and all homeless and oppressed individuals, families and communities across America, we cry out to the United Nations and request that you all share our struggle with the rest of the world, take the systemically-oppressive and inhumane conditions in which we are reduced to survive before the International Criminal Courts in Geneva, Switzerland and DEMAND that an international task force be created to thoroughly investigate our conditions and hold America accountable with an intense, never-before-seen high level of international oversight…including international sanctions if significant infrastructural improvements aren’t made.

“And please be reminded that the Olympic Sumer Games are coming to Los Angeles in 2028 which means people from all over the world will see all the deplorable and inhumane conditions firsthand for themselves. I’m sure the International Olympic Committee (IOC) isn’t aware of what’s really going on here in the streets and on the sidewalks in America.”

(NOTE: Click here if you are interested in the amount of spending on homelessness in LA County.

(General Jeff … Jeff Page … is a homelessness activist and leader in Downtown Los Angeles. Jeff’s views are his own.) Edited for CityWatch by Linda Abrams.