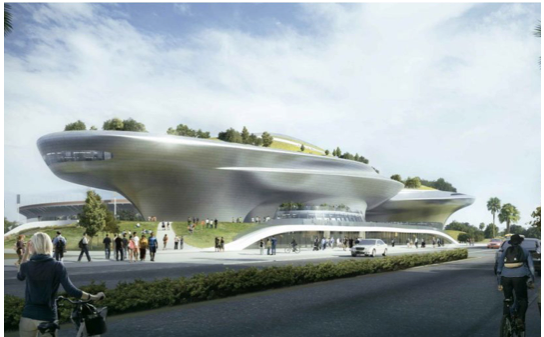 THE PREVEN REPORT--What to make of George Lucas' forthcoming museum of narrative art?  Recently approved by the Mayor and City Council of Los Angeles, and blessed by the County Board of Supervisors, the museum will be erected adjacent to the California Science Center, the California African American Museum and the Museum of Natural History.

Critics have dismissed the proposed museum as being a hodgepodge of Norman Rockwell paintings and Star wars memorabilia encased in a giant sneaker insole, but such critics are wasting their breath. The George Lucas Museum of Narrative Art is here to stay and without question Angelenos will find things to interest them in the museum. The key question, the question on which hangs the ultimate success or failure of the museum is … how much will it cost to get in? The adjacent California Science Center is free as is the Broad.

The only answer that possibly makes sense, in light of Mr. Lucas and Ms. Hobson's stated ideals, is that the admission will be 100% free.  And yet for some reason, they have not been willing over the last month to state what the price will be.  Perhaps they have forgotten, ‘the force is with them.’ So, what is the hold up?