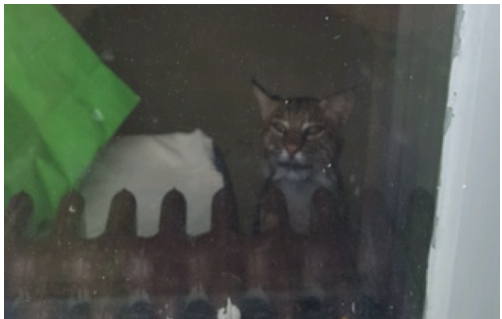 ANIMAL WATCH-A surge in attacks on humans and pets by bobcats testing positive for rabies across the U.S. in 2017 is getting the attention of public health officials who say it is unusual for bobcats to contract this disease and also abnormal for this elusive wild feline to attack humans. Officials warn that in any case where a bobcat attacks a human, rabies should be suspected.

Los Angeles has focused on its resident mountain lions, but the recent change in bobcat behavior in many states may warrant increased awareness. Other than sightings in Silver Lake in 2016, there has been little published about bobcats in LA, probably because they are shy and reclusive and don't feed on people's pets.

Both humans and pets can get rabies from direct physical contact, such as a bite, lick or scratch from an infected animal. Rabies exposures are taken seriously because once a person starts developing symptoms that person will not survive, experts say.

Over the last 100 years, rabies in the United States has changed dramatically. More than 90% of all animal cases reported annually to the Centers of Disease Control (CDC) now occur in wildlife; before 1960 the majority were in domestic animals. The principal rabies hosts today are wild carnivores and bats.

But, it was a June 7 report that a rabid feral cat with a tipped ear bit a person trying to help it which caused Veterinarian Katie Thompson to state, "Despite the panic witnessed with Ebola, rabies is the deadliest virus on the planet."

On January 5, 2017, NBC News reported that a bobcat entered a North Port, Fla, home through an open front door and wouldn't leave. Officers from Florida Fish and Wildlife Conservation Commission used a catchpole to try to get the animal out, but it became aggressive and scratched one officer. The cat was finally removed and euthanized. Tests later revealed it had rabies. Another bobcat attack took place nearby during the same week. A rabies alert was put into effect in the area for 60 days.

On Jan. 17, 2017, a bobcat entered the greenhouse at The Caring Community of Connecticut, a social service provider in Colchester, Conn. About 20 people were eating lunch when the bobcat appeared at the back door.

The animal first attacked a backpack, then quickly turned its attention to the people. It lunged and jumped on one woman. When two other women tried to help, all three were scratched, according to ABC7 News.

When officers arrived, the bobcat got into an aggressive attack stance, and one officer shot and killed the animal. It tested positive for rabies at the State Health laboratory.

The dogs were in the house and the bobcat was under the porch when the two officers arrived. The bobcat ran and jumped at them and was shot. The dogs were treated for wounds. ACO Pease explained that bobcat had porcupine quills in its mouth and in her experience that generally means they have rabies.

On June 7, 2017, a bobcat entered an East Mill Road home in Washington Township, NJ, causing a mother and her two children to lock themselves in a bathroom for safety. Two responding police officers saw the bobcat in the residence. They opened the exterior doors and kitchen window and, after about an hour, the bobcat left through the kitchen window and ran into the woods, according to NJ.com.

Then on June 8, Washington Township police received another report that a bobcat had attacked a dog in a backyard nearby. The homeowner had taken the dog to a veterinarian for treatment before police arrived and the bobcat appeared to have left the area.

Less than an hour later, officers received a call about a bobcat at a private residence in the same area. They were able to confine it until a Fish and Wildlife officer captured the animal and removed it for rabies testing, telling police the bobcat displayed early signs of rabies. It was not clear whether the bobcat captured was the same one that entered the East Mill Road home the day before.

On June 25, 2017, an 80-year-old New Hampshire woman in Sunapee, NH, fought off an attacking rabid bobcat with the help of her two dogs and her gardening sickle. The animal bit her face arm and back. Her son rushed outside with a shotgun and killed the cat, which tested positive for rabies, WHSV.com reports.

On July 19, 2017, Steve Verschoor, of Anthem, Ariz., told The Arizona Republic he was driving near the Anthem County Club on Monday when he saw a throng of people watching a bobcat attacking a German shepherd. He said he jumped out of his car so quickly that he forgot to put it in park, and he got in-between the animals and forced them apart.

Video showed Verschoor, 54, violently swinging around to get the bobcat off of his hand after it latched onto it. The bobcat released its grip and ran.

The bobcat was later caught and killed by Maricopa County sheriff’s deputies. Officials from Arizona Game and Fish Department confirmed that the bobcat was rabid. Verschoor is receiving rabies treatment every week for a month. The owner of the German Shepherd named Skelly said the dog has also been treated for injuries and is getting treatment to prevent rabies.

Verschoor said he won't hesitate if he ever sees another animal in need. “I’m no hero,” he said. “I’m just a man who loves animals as much as I love my family.”

On July 22, 2017, the Arizona Star Daily reported that a dog owner killed a bobcat northeast of Mount Lemmon a week earlier to protect his pets. On July 20, officials with Pima Animal Care and the Pima County Health Department announced that the bobcat tested positive for the rabies virus, the man was notified and appropriate precautions are being taken.

On June 7, 2017, Target 8 confirmed that a rabid cat with a clipped ear bit a person trying to help it last week in Hillsborough County, Fla. The cat appears to be a feral that was trapped, neutered, vaccinated for rabies (TNVR) and then released.

Aimed at reducing the wild cat population, each month the Humane Society of Tampa Bay traps, neuters, vaccinates and releases hundreds of feral cats, but, there is little accountability after that, the report states.

Steve Huard of the Department of Health, says it takes 28 days for a rabies vaccine to become effective, which provides little protection for a cat vaccinated one day and released into the wild the next day. “If you have an animal that’s living in the wild--a feral animal--that was vaccinated and it comes in contact with another animal that has rabies within that 28 day period, it could definitely happen,” explained Huard.

Amy Howland sat on the Hillsborough County Animal Advisory Committee task force studying “no kill” policies and said, “This is not a surprise. As pet owners, we’re supposed to get a rabies shot per our veterinarian once a year.” As far as rabies shots for feral cats, in Hillsborough County, it’s one and done, stated Howland.

“Well, the Department of Health’s position and recommendation on trap, neuter and release is, it’s not good for public health,” explained Huard.

DIFFERENCES BETWEEN BOBCATS AND MOUNTAIN LION

According to the Bobcat Fact Sheet, there is a lot of difference between mountain lions and the much smaller bobcats, which are tan with dark spots and have a short tail with a black tip on the top. They weigh from 15 to 35 pounds and average from 24 to 48 inches long, and they can jump as high as 12 feet.

Although mountain lions rarely attack people, a recent California Department of Fish and Wildlife study, announced by SFGate on February 14, 2016, examined the stomach contents of 83 mountain lions out of the 107 legally killed in the state last year under special depredation permits. The results showed that 52% had recently consumed cats, dogs and other domestic animals.

Some Angelenos say that they have backyard bobcats as pets. This video by the DoDo is a warning that, while we want to live with wildlife, the warm-and-fuzzy feelings may not be reciprocated.

Carol Baskin, CEO of Big Cat Rescue, told the DoDo, "It's important to understand how a cat communicates, because assuming that bobcat's cheek rub is a sign of affection is going to encourage keeping bobcats as pets--and that's very dangerous indeed."

"The difference between a domestic cat doing that to you [cheek rub] and a bobcat doing that to you is, one of these days…he's going to grab ahold of that kid's ear and rip it off, or rip his nose off, or tear his eyeball out, because bobcats are just that powerful and that enthusiastic. Not because he's trying to hurt the kid, but because that's how bobcats play," she explained.

This bobcat isn't "showing his love," she said. He's marking his territory, and his territory should probably watch out.

ADMIRE WILDLIFE FROM A DISTANCE

Most wild animals prefer to be enjoyed from a distance, rather than be forced into any kind of confrontation with humans -- unless they have rabies, in which case an animal that would usually keep its distance may suddenly attack.

The recent number of such incidents across the country is a reminder that wildlife can be dangerous, not only as predators but because of the diseases they transmit.

Children, especially, should be taught to respect wildlife and not approach or touch even a calm animal that is not a family pet. It may be too weak or ill to run, but it can still bite to protect itself. If it is rabid, that one bite can be fatal.