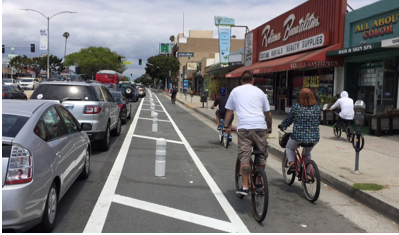 Most of us who fought doggedly for the Expo Line, and then for Measure R, and then for Measure J, were dominated by political moderates and liberals. We didn't much want car-only and backwards-thinking oldsters giving the middle finger to commuters wanting another way to get around, particularly as an option to the mind-numbing I-10 freeway.

So consider the conundrum we now have: how to create a bicycle-friendly city without trampling on the rights of car commuters -- who, believe it or not, do have rights, do pay taxes, and do vote.

It's like the "food vs. water...which is more important" argument. It’s stupid, nonsensical, and belongs nowhere in any adult debate. The Los Angeles of 2017 is neither the Los Angeles of 1955 nor the Portland of 2017.

And what percentage of commuters travel by bicycle in Portland, that alternative-transportation mecca of the U.S.? As of January 2016, approximately 7.2%, according to the Portland Bureau of Transportation. This is greater than any other American city.

Nationally, 0.5% of commuters bicycle, according that same Portland Bureau of Transportation. In addition, 238% more people biked to work in 2010 than in 2000.

And although roughly half of commuters access Downtown Portland via light rail, ridership of rail overall is mixed, fluctuating due to a variety of economic and demographic factors.

All this means that the majority of commuters still access their work/errands via car, but to ignore the needs of transit riders, pedestrians and bicyclists is silly. We need more options.

And because the majority of LA County voters voted for both Measure R and Measure M (half-cent sales taxes) to support mass transit and alternative modes of travel, it's pretty clear that most car commuters understand that need as well.

But it's not so clear that sufficient numbers of bicyclists and transit "advocates" are reciprocating that feeling towards motorists, who, after all, are paying for those bicycle lanes and rail lines. Freeway improvements and widenings, road repairs, and the like are all consistent with better bus stops, more bus benches, fixed sidewalks, and bicycle lanes.

So now we've got Councilmember Mike Bonin (who's fought both for affordable housing and against horrible projects like the 12444 Venice Blvd. monstrosity) in trouble because he oversaw a road diet on Venice Blvd. in Mar Vista to allow for protected ridership of bicyclists, and to encourage pedestrians to access Venice Blvd. businesses in "Downtown Mar Vista" between Centinela and Inglewood.

Mike's a personal friend of mine, but so are my neighbors who either advocate for or who oppose the Venice Blvd. reconfiguration.

This reconfiguration, part of Mayor Garcetti's vision of Great Streets for all of Los Angeles, was not done behind closed doors, and was the result of an entirely open process of community outreach performed by Mar Vista Community Council leaders who would never pull a sneaky move on their neighbors just to pursue a privately-held agenda.

So let's try the following:

1)   This is a pilot program, so let's do this by data and the numbers. If in three months or so it's awful, then we go in reverse mode…or at least allow for bicycle lanes and car lanes to be restriped to give everyone more access (and maybe a median or sidewalk diets, instead.)

This really isn't hard, folks -- just get used to the idea that everyone should have rights, and that this isn't a "win-lose" battle as much as it is a need to achieve compromise.

(Kenneth S. Alpern, M.D. is a dermatologist who has served in clinics in Los Angeles, Orange, and Riverside Counties, and is a proud father and husband to two cherished children and a wonderful wife.  He is also a Westside Village Zone Director and Board member of the Mar Vista Community Council (MVCC), previously co-chaired its Planning and Outreach Committees, and currently is Co-Chair of its MVCC Transportation/Infrastructure Committee. He was co-chair of the CD11 Transportation Advisory Committee and chaired the nonprofit Transit Coalition, and can be reached at alpern@marvista.org. He also co-chairs the grassroots Friends of the Green Line at www.fogl.us . The views expressed in this article are solely those of Dr. Alpern.) Photo credit: Joe Linton/Streetsblog LA. Edited for CityWatch by Linda Abrams.