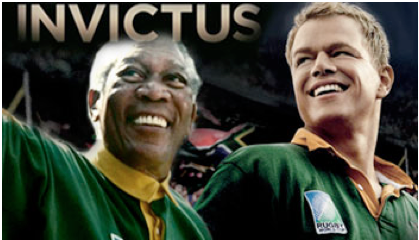 GELFAND’S WORLD--In the movie Invictus (above), Nelson Mandela is hoping to create a bond with South Africa's white population He invites the captain of the country's largely white rugby team to visit him at the presidential palace.

Mandela asks, "How do you inspire your team to do their best?"

The captain responds, "By example. I've always thought to lead by example, sir."

Mandela is pleased with the answer. "Well, that is right. That is exactly right."

Apparently the city's Department of Neighborhood Empowerment didn't see the movie. To understand the level of failure, follow along below.

Earlier this week, I wrote about the way that the Department of Neighborhood Empowerment (DONE) took control of the Central San Pedro Neighborhood Council (CSPNC) using as flimsy a set of excuses as you are ever likely to see. Apparently, DONE is not impressed with the way that CSPNC has been running its meetings and even less impressed with the way CSPNC has been writing its agendas.

DONE declared that CSPNC is now in the condition referred to as exhaustive efforts, a legal purgatory in which a neighborhood council cannot function under its own volition, but can only exist and function under the direct rule of DONE.

DONE apparently thinks that it knows best, and (read closely here) thinks that it can teach neighborhood councils how to act properly. Let's take a look at how well that has worked this week.

On Tuesday night, CSPNC held a board meeting. The agenda was prepared by a DONE employee. That same DONE employee then ran the meeting. Board members had been given a chance to suggest items for the agenda, but DONE made clear that it has absolute authority over what could be allowed in that agenda.

This was DONE's big chance to follow that line from Invictus and lead by example -- to run a board meeting (even one with a phony-baloney agenda) that displayed proper decorum, procedure, and respect for the law. What a joke this turned out to be. It was a board meeting that wasn't a real board meeting, which used an agenda that wasn't written to serve the public interest but rather to punish the board members.

The DONE employee (let's just refer to him as the DE) began the meeting by flatly denying a request from a board member that the time limits in the agenda (his own agenda!) be enforced. It was a reasonable request, but the DE told the board and onlookers, "We'll suspend the rules, and just go with the flow."

Under Roberts Rules, no one person has the power or authority to change the rules like that. It is a power that belongs to the board as a whole. The DE even smiled as he demonstrated contempt (or was it just ignorance?) over his violation of the most basic principle of parliamentary procedure.

So much for leading by example.

It went like that for the rest of the meeting. Here's an example that really sets the bar for chair misconduct: There was a motion to add a rather lengthy tract to the council's standing rules. From my standpoint, it wasn't a useful motion, but it was the sort of motion that is susceptible to honest disagreement. The board held a vote and the motion failed on a 5-5 tie.

And then the DE decided to treat the failed motion as passed because he liked it.

This would be grounds for a board to remove its chair for misconduct, or for somebody to file an official grievance regarding the board's action. For a chair to disregard a board vote this egregiously surpasses understanding.

As an aside, please note how the process of exhaustive efforts can make a bad situation even worse, because it teaches exactly the wrong thing -- dictatorship as a role model.

The list of misconduct (or ignorant conduct) by the DE goes on. I won't bore you with all the details, but let's consider one other example. At the beginning of the meeting, representatives of government agencies were invited to speak. This includes groups like the local police, the port of Los Angeles, and the City Council office. The DE invited questions from the board, but decided on his own to bar questions and comments from the public.

Not to be snide, but what part of the phrase neighborhood council does DONE not understand? Residents of the neighborhood were present, but were forbidden to participate.

Eventually the DE relented part way after being challenged by board members. But audience members -- in other words, the people for whom the neighborhood council exists -- were limited to one minute each. This limitation was (once again) in direct violation of the time limits defined in the official agenda. When changes to time limits such as this are not made by the board but by a single person, it is no longer a democratic organization, but a dictatorship. (It is true that under state law, the chair of a public legislative body has the authority to determine overall time limits and individual time limits for public comment, but the DE was not invoking the Ralph M Brown Act at the time, and probably doesn't understand its proper usage anyway.)

So what example did DONE set on this Tuesday night? Was it that the chair of the meeting must protect the rights of all participants, which is the fundamental underlying principle of parliamentary procedure? No.

Did DONE through its DE teach this council how to hear and represent the views of the community? It's hard to voice an expression that would be negative enough to express the abject failure in this regard. In fact, members of the community stood up and protested the fact that the CeSPNC is no longer holding committee meetings during this period of exhaustive efforts.

Apparently the exhaustive efforts are not required to be so exhaustive as to require DONE staff to put in work in the community by holding committee meetings. After all, this would provide members of the community an opportunity to share their concerns. Can't have that under the new DONE hegemony.

Overall, what the DE provided was authoritarianism in a velvet glove. Everything was conducted in a calm and reasonable-sounding tone, but without regard for either the public interest or for setting a good example. The DE made rules out of thin air, broke rules with abandon, and ignored questions asked of him. Neither Tuesday night's DE nor any other DONE staffer has answered my question: What law or rule did CSPNC break prior to the placement of CSPNC in exhaustive efforts?

I asked a higher ranking DONE official the exact same question more than a week ago. Surely the DONE staff should have understood that the question would come up again, and needs to be answered. The refusal to respond to that question is a sign of contempt towards my community.

The most immediate conclusion is that the city statute which gives DONE the power to place a council in exhaustive efforts is defective. We probably won't see the City Council fix it any time soon, but as a stopgap, DONE should start to act in good faith. A longer term possibility is for the neighborhood councils to negotiate a memorandum of understanding (essentially an agreement as to how each side will treat the other) with DONE.

Another conclusion is that DONE has been playing fast and loose with its treatment of this particular neighborhood council. The absence of a legitimate explanation for invoking exhaustive efforts suggests additional unstated motives. We might also infer that there is some kind of power struggle going on within DONE itself, or at least the desire to appear tough after many years of being docile.

Throughout its entire existence, DONE has been a failure in teaching neighborhood council boards and chairs how to behave in meetings. The result is that councils don't get things done very well or very often. The overall result is that over the broad expanse of the city, the councils don't work together very effectively, and almost never in a timely manner.

I suspect that the reason for the failure to teach leadership is that DONE is not staffed by people who (at some point in their lives) had to stand up in public in a democratically elected organization and lead. It's a lot different than running a corporate board or arguing a case before a judge. The result over the years has been a system in which many individual councils have fumbled their way along.

The solution is to teach entire boards (and members of the community) how to carry out legitimate and effective meetings by understanding and using proper procedure. It's not really all that hard. Boards who have this knowledge base are better at choosing their own officers, because they recognize the phony ones and learn to respect the legitimate ones.

The best evidence for this line of argument is that the neighborhood councils that have turned out to be the most effective are the ones that were founded by people who already had considerable experience participating in democratically elected boards and committees. Those councils are also the most civil, both among themselves and with the public. For all its complaining about civility, DONE has never figured out that one essential element of leadership is knowing what you're doing.