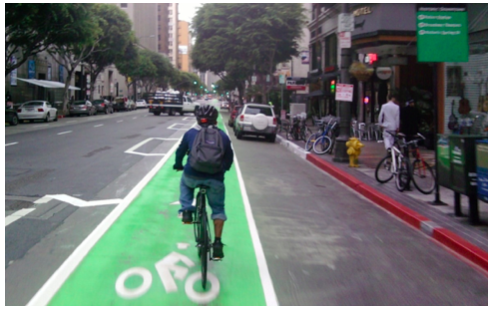 ROAD DIET OVERDOSE-Why does Mayor Garcetti think that it is a good idea to expose children to high levels of toxic fumes by constructing Bike Lanes in heavily trafficked thoroughfares?

The Exide Plant in Vernon was closed years ago due to the toxic harm it was causing to the surrounding community, especially to children. Although the source of the toxicity is in Vernon, it impacts children living in Los Angeles, e.g. Boyle Heights. Who would suggest re-opening the Exide plant knowing about the health dangers it poses to children?

There is a general consensus that as a society we should not expose our children to toxic chemicals, fibers, and fumes. So why does Mayor Eric Garcetti insist on placing Bike Lanes for our kids where toxic auto emissions are the most concentrated and dangerous?

The entire world has known for decades that auto emissions are toxic. In 2006, Institute of Transport and Logistics Studies at the University of Sydney, Australia, conducted detailed research about the specific health impact of fine particulate matter (such as pathogens) leading to serious health problems like lung cancer. One of the most important findings of the study is that the aggregate toxicity in the general area of a roadway is not the most important factor, but rather it is the specific hot spots, like being behind a diesel truck or being inside a vehicle with air conditioning, are most significant.

Citing a 2004 study of the California Highway Patrol, the Sydney study noted that air quality inside a CHP patrol car could be non-hazardous when the road-side monitors found the outside ambient air to be toxic. “For instance, in a study of fine particulates in state trooper vehicles in California, Riediker et al., (2004) found that levels of PM levels in state trooper vehicles were not only lower than might be deemed hazardous, but actually lower than levels from roadside monitors.” (Sydney Study, page 13.)

Studies from around the world show that while health risks from exposure to toxic fumes are greatest in the roadways themselves, the filtration systems in vehicles reduce the level of fumes to a non-hazardous level. Moving Bike Lanes away from major streets to bike paths with vegetation or to side residential streets with trees also solve the problem. Children who are riding their bikes on Reseda Boulevard have no air conditioning to protect them.

The additional aggravating factor for children riding in Garcetti Bike Lanes in major thoroughfares is that they are exercising, and thus, often inhaling the particulate matter deep into their lungs. This would not be the case if they were riding in a car or walking. Placing Bike Lanes on heavily trafficked roads is akin to sprinkling lead paint on school lunches.

The City Is Sued, (yep, Garcetti does it again) over its Toxic Bike Lanes

In 2015, Hollywoodians Encouraging Logical Planning (HELP), the Citizens Coalition Los Angeles (CCLA) and others advised the City that Mayor Garcetti’s Mobility Plan 2035 proposal to place Bike Lanes for children and others in heavily trafficked streets was an unacceptable health risk. Although LA has already had access to worldwide literature on the subject, HELP and CCLA handed over hundreds of pages of studies showing the danger to children. But Mayor Garcetti ignored those studies.

HELP and CCLA told the City that it had a duty under California’s environmental law (CEQA) to study the health impact of Bike Lanes in major streets. If there was some basis for the Mayor’s belief that toxic fumes in Bike Lanes would harmless, perhaps the Environmental Impact Report (EIR) would show why LA was unique. More likely, the EIR would show that what causes cancer in Australia, Europe and Canada, also causes cancer in Los Angeles.

People need to understand why toxic Bike Lanes are so near and dear to Mayor Garcetti. They are used to create “Road Diets.” These are artificial means to clog (slow down) traffic, but this increases toxic fumes by prolonging trips. When bike Lanes are placed in major roads, they remove vehicle lanes and cause traffic congestion.

The theory seems to be that if Garcetti can make driving a car sufficiently aggravating, then people will use mass transit. Others contend that the desire to force people to use the subway is not a proper justification for exposing children to carcinogens. Also, most Angelenos do not think that intentionally making Los Angeles traffic congestion worse is a proper goal for City Hall. According to Inrix 2016 Traffic Scorecard, Los Angeles already has the worse traffic congestion in the entire world. How much worse does the Mayor want it to become?

Both HELP and CCLA sued the City over these toxic Garcetti Bike Lanes, alleging that the City has a duty under CEQA to study the health risks of such major changes to the City’s infrastructure. (Fix the City, Inc. has also sued the City over Mobility Plan 2035, and all Petitioners’ lawsuits have been “related” before Judge Hogue, Department 86, Stanley Mosk Courthouse, downtown Los Angeles.)

About a year ago, the City Attorney’s office said it would settle the lawsuits, which meant there would be a study of the health risks of Bike Lanes; but it needed a little time to finish the settlement. Thus, no trial date was set. Then, the Garcetti Administration wanted an additional continuance, and then another continuance and then another one. On Friday, June 9, 2017, on Channel 11, Mayor Garcetti announced more Bike Lanes for LA. That same morning, he sought an additional continuance with no trial date to be set. HELP and CCLA said that if the City would stop working to add Bike Lanes until the health study was conducted, they would agree to the continuance. But the Garcetti Administration refused to stop work on the Bike Lanes while still trying to avoid a trial date. Judge Hogue set the trial date for January 26, 2018.

The Garcetti Administration was then asked again to voluntarily stop work on the Bike Lanes until the trial, but said “No.”

The attitude of this Administration is mind boggling. Suppose the Exide Plant were to reopen or suppose asbestos and PCBs were re-added to classrooms? Suppose we started using lead paint on children’s toys? In no rational world do we intentionally expose children to new carcinogens. As residents of Silicone Beach have seen, they will get the toxic Garcetti Bike Lanes whether they like it or not.