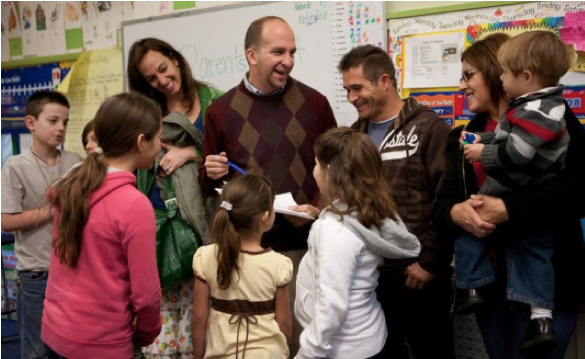 EDUCATION POLITICS--Some of America’s most powerful corporate plutocrats want to take over the Los Angeles school system but Steve Zimmer (photo above, center), a former teacher and feisty school board member, is in their way. So they’ve hired Nick Melvoin to get rid of him. No, he’s not a hired assassin like the kind on “The Sopranos.” He’s a lawyer who the billionaires picked to defeat Zimmer.

This morning (Friday) the Los Angeles Times reported that “Outside spending for Melvoin (and against Zimmer) has surpassed $4.65 million.” Why? Because he doesn’t agree with the corporatization of our public schools. Some of their donations have gone directly to Melvoin’s campaign, but much of it has been funneled through a corporate front group called the California Charter School Association.

To try to hoodwink voters, the billionaires invented another front group with the same initials as the well-respected Parent Teacher Association, but they are very different organizations. They called it the “Parent Teacher Alliance.” Pretty clever, huh? But this is not the real PTA, which does not get involved with elections. In fact, the real PTA has demanded that this special interest PAC change their name and called the billionaires’ campaign Zimmer “misleading,” “deceptive practices,” and “false advertising.”

These out-of-town billionaire-funded groups can pay for everything from phone-banks, to mailers, to television ads. Los Angeles Times columnist Steve Lopez described the billionaires’ campaign to defeat Zimmer, which includes sending mails filled with outrageous lies about Zimmer, as “gutter politics.”

As a result, the race for the District 4 seat — which stretches from the Westside to the West San Fernando Valley — is ground zero in the battle over the corporate take-over of public education. The outcome of next Tuesday’s (May 16) election has national implications in terms of the billionaires’ battle to reconstruct public education in the corporate mold.

The contest between Melvoin and Zimmer is simple. Who should run our schools? Who knows what’s best for students? Out-of-town billionaires or parents, teachers, and community residents?

Before examining just who these corporate carpetbaggers are, let’s look at who Steve Zimmer is, what he’s accomplished, and what he stands for.

Zimmer grew up in a working class community and attended public schools. His father was a printer and his mother was a school teacher. After college, he became a teacher, beginning with Teach for America in 1992.

He spent 17 years as a teacher and counselor at Marshall High School. When he taught English as a second language, he used an experiential approach that related to his students’ daily lives. He created Marshall’s Public Service Program to make public service intrinsic to the student experience. He founded Marshall’s Multilingual Teacher Career Academy, which was an early model for LAUSD’s Career Ladder Teacher Academy.

To help address the concerns of at-risk youth, he founded the Comprehensive Student Support Center to provide health care services for students and their families. He helped create the Elysian Valley Community Services Center, a community owned-and-operated agency that provides after-school, recreational and enrichment programs, a library, and free Internet access.

He was elected to the school board in 2009 and re-elected in 2013 despite the onslaught of billionaire bucks against him.

What are some of Zimmer’s most important accomplishments on the school board?

As a member of the Board, and his last two years as President, Zimmer led the school district through difficult times, weathering a recession, dealing with tragedies, and transitions in leadership. He used his skills to resolve challenges by working collaboratively.

Zimmer has received numerous awards for his work with children and families, including the LA’s Commission of Children, Youth and their Families “Angel Over Los Angeles” award, El Centro Del Pueblo’s “Carino” award and the LACER Foundation’s “Jackie Goldberg Public Service Award.”

Nick Melvoin is the candidate completely sponsored by the 1 percent. His extreme lack of experience clearly doesn’t bother them. Melvoin is so devoted to the corporate agenda for our schools that he claims a “hostile takeover” is needed.

Who are some of the billionaires and corporate lobby groups that want to defeat Steve Zimmer and elect Nick Melvoin?

What do these corporate moguls and billionaires want and what has Zimmer done to make them so upset?

They want to turn public schools into educational Wal-marts run on the same corporate model. They want to expand charter schools that compete with each other and with public schools in an educational “market place.” (LA already has more charter schools than any other district in the country). They want to evaluate teachers and students like they evaluate new products — in this case, using the bottom-line of standardized test scores. Most teachers will tell you that over-emphasis on standardized testing turns the classroom into an assembly line, where teachers are pressured to “teach to the test,” and students are taught, robot-like, to define success as answering multiple-choice tests.

Not surprisingly, the billionaires want school employees — teachers — to do what they’re told, without having much of a voice in how their workplace functions or what is taught in the classroom. Rather than treat teachers like professionals, they view them as the out-sourced hired help.

The corporate big-wigs are part of an effort that they and the media misleadingly call “school reform.” What they’re really after is not “reform” (improving our schools for the sake of students) but “privatization” (business control of public education). They think public schools should be run like corporations, with teachers as compliant workers, students as products, and the school budget as a source of profitable contracts and subsidies for textbook companies, consultants, and others engaged in the big business of education.

Like most reasonable educators and education analysts, Zimmer has questioned the efficacy of charter schools as a panacea. When the billionaires unveiled their secret plan to put half of LAUSD students into charter schools within eight years, Zimmer led the opposition. Zimmer isn’t against all charter schools but he doesn’t want the board to rubber-stamp every charter proposal. He wants LAUSD to carefully review each charter proposal to see if its backers have a track record of success and inclusion. And he wants LAUSD to hold charters accountable. This kind of reasonable approach doesn’t sit well with the billionaires behind their front group, the California Charter School Association.

Zimmer has also questioned the over-reliance on high-stakes standardized testing as the primary tool for assessing student and teacher performance. Testing has its place but it can also become an excuse to avoid more useful and holistic ways to evaluate students and teachers — and to avoid the “teach to the test” obsession that hampers learning and creative teaching. Zimmer has called for — and helped negotiate the deal for — some portion of teacher evaluations to include test scores. But that’s not what the billionaires want.

As a former LAUSD teacher with 17 years in the classroom, Zimmer respects teachers as professionals. He understands the jobs and frustrations of teaching. He wants LAUSD to create schools that are truly partnerships between teachers, parents, students and the district. He is often allied with United Teachers Los Angeles, but he is nobody’s lapdog. He has always been an independent voice and has disagreed with UTLA on some significant matters.

In fact, four years ago, Times’ columnist Lopez wrote that Zimmer “... has tried to bridge differences among the warring parties, winning supporters and making enemies on both sides in the process.”

But the billionaires don’t want a bridge-builder. They want a compliant rubber stamp, and that’s what they’ve found in Nick Melvoin, the advocate for a “hostile takeover.”

In his endorsement of Zimmer, Mayor Garcetti said: “The campaign against Steve has turned vicious, and I feel compelled to reach out on behalf of a champion for all our kids. I’ve worked closely with Steve Zimmer for more than 15 years. I’ve watched him make change in the lives of kids and in the fabric of our communities. Under Steve’s leadership, Los Angeles Unified schools have shown impressive progress. Steve’s collaborative, ‘all kids, all families’ approach is what we need on the School Board.”

The Los Angeles Unified School District is the second largest school system in the country with over 700,000 students. So gaining control of its board — and its budget — is a good “investment” for the billionaires who want to reshape education in this country.

Melvoin’s campaign and backers have outspent Zimmer by a huge margin. Their battle has turned into a remarkable David vs. Goliath contest. But let’s recall who won that Biblical battle. Goliath had the big weapons but the feisty David had the slingshot. That’s how Zimmer beat another hand-picked billionaire-backed candidate four years ago, with a grassroots campaign that relied on parents, teachers, and neighborhood residents, and he’s hoping to do it again next Tuesday.

(Peter Dreier is professor of politics and chair of the Urban & Environmental Policy Department at Occidental College and an occasional contributor to CityWatch.)