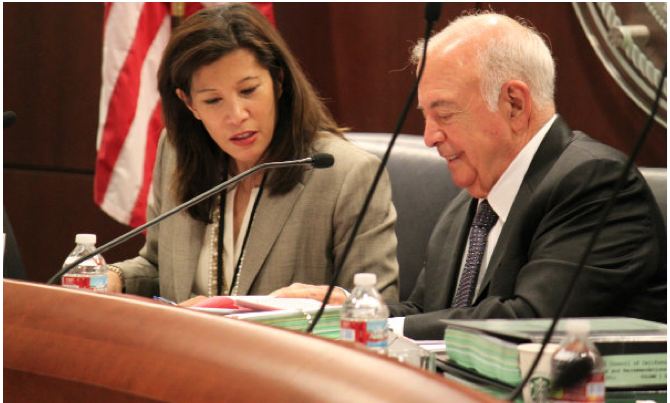 CORRUPTION WATCH-Secrecy is power. Power tends to corrupt. Corruption destroys. The courts are the most secretive branch of government. The secrecy which the California courts enjoy has resulted in serious constitutional violations.

While anyone may bring a video camera to record other public meetings, the law forbids the recording any judicial proceeding without the express, prior permission of the court. California Rule of Court 1.150:

Except as provided in this rule, court proceedings may not be photographed, recorded, or broadcast…

In contrast, California law mandates that all other public meetings may be recorded by the public.

Government Code, § 54953.5. (a) Any person attending an open and public meeting of a legislative body of a local agency shall have the right to record the proceedings with an audio or video recorder or a still or motion picture camera in the absence of a reasonable finding by the legislative body of the local agency that the recording cannot continue without noise, illumination, or obstruction of view that constitutes, or would constitute, a persistent disruption of the proceedings.

Trials are not secret proceedings closed to the public and the Brown Act recognizes that the recording of a public meeting is no different from a person’s watching and listening to a public meeting. Is there any reason that people, including parties to litigation and the news media, must obtain the express permission of the judge in order to record a trial? Even if the judge permitted a record, under Rule 1.150(d) the recorder’s use is limited “personal notes.” “The recordings must not be used for any purpose other than as personal notes. Rule 1.150(d)

Since we have all seen trial excerpts actually televised, the courts are ignoring the law when it suits the court’s interests. If a judge wants a recording made public, he ignores the law that limits the use to “personal notes.” In a nation based on the rule of law rather than the whim of men, judges should follow the law, but they do not. Rather, in California the judges and justices do whatever personally pleases them. That is tyranny.

In the last several years, judicial abuse has become worse since the courts have ceased to have official court reporters. As a result, only the wealthy can afford to pay for court reporters and those court reporters are beholden to the law firm which retains them. The number of missing words and “inaudibles” which appear favorable to the party who hired the court reporter is suspiciously high. Others who were present in court not only do not have permission to use a tape recorder, but if they obtained permission, they are forbidden to use their recording to augment or correct an inaccurate transcription. “The recordings must not be used for any purpose other than as personal notes. Rule 1.150(d)

It is worse than ironic that public court hearings during which someone’s life may be destroyed -- where he may be judicially robbed of all he owns or placed on death row -- may not be recorded, yet the Brown Act mandates that anyone may record a public meeting which discusses which sidewalks need repair.

Sunshine Is the Disinfectant that Rids Government of Corruption

Over a century ago in his book, Other People’s Money (1914), soon to be Supreme Court Justice Louis Brandeis wrote:

“Publicity is justly commended as a remedy for social and industrial diseases. Sunlight is said to be the best of disinfectants; electric light the most efficient policeman. And publicity has already played an important part in the struggle against the Money Trust.”

More than 100 years later, the disinfectant of sunlight is shut out of California courts. The power of secrecy keeps the public from knowing what is being done to them. The federal court system, however, is one institution with many opportunities to witness the persistent constitutional violations of the California judiciary.

The nation has two court systems. While each state has its own courts, the federal government has its own system organized into districts. California State Courts fall in the Ninth Circuit Court of Appeals which covers the entire western United States. When it comes to the U.S. Constitution, the federal system has the final say.

The Federal courts have been trying for decades to force the California courts to rectify their unconstitutional behavior. In January 2015, three federal judges complained that the California courts display an “epidemic of misconduct” and placed the blame on state court judges and, in particular, on California Supreme Court Chief Justice, Tani Cantil-Sakauye (albeit the problem predates her tenure.)

As federal Judge Kozinski noted, prosecutors "got caught this time but they are going to keep doing it because they have state judges who are willing to look the other way."

As Judge Kozinski predicted, a year later the federal courts were faced with the unconstitutional behavior of the California justices themselves. This time, the justices were not merely turning a blind eye, but they were, in fact, the perpetrators. The case was Curiel v Miller (9th Cir. # 11-56949, March 23, 2016.)

The writ process is slow since the wrongfully incarcerated person has to start with the trial court, work his way through the state court system, and if denied by the California Supreme Court, he has to petition the federal courts. Thus, a wrongfully imprisoned person can spend several months or years in jail without a just basis for being locked up. (Curiel was convicted in March 2006, and the Ninth Circuit issued its opinion a decade later in March 2016.)

The California state courts have a history of locking up people who have done nothing wrong. Former U.S. Attorney Richard I. Fine, for example, was thrown in jail for fourteen months because he had brought to light the fact that all the judges in Los Angeles County were receiving millions of dollars in extra salary from the County. In retaliation, Attorney Fine was disbarred, ordered to pay hundreds of thousands of dollars and thrown in jail. Thus, readers should realize that we are discussing being soft on crime. People who have done nothing wrong except anger California judges can find themselves incarcerated.

In his concurring opinion in the Curiel case, Judge Jay S. Bybee, who is a recent George Bush appointee to the Federal Court, related the extensive history of the Federal courts’ attempts to have the California Supreme Court provide an accurate explanation why a writ for habeas corpus has been denied. If a prisoner has filed his writ late, then the federal court may not review the propriety of his incarceration, but if his writ is defective, then the federal court may review and reverse the denial. Then, the prisoner may be released or he may have a new trial.

Thousands of Californians are subjected to these Constitutional Abuses

Since there about 3,400 denials of writs of habeas corpus each year, a significant number of people are affected by the California Supreme Court’s intentional interference with the federal court’s work. Federal Judge Stephen Reinhardt stated that the California Supreme Court’s behavior leaves “even clearly erroneous constitutional decisions of the state courts...uncorrected and leave[s] defendants without the check on constitutional error…”

Federal Judge Jay S. Bybee went so far as to suggest that the California Supreme Court needs new justices. When the degree of intransigence in denying people their constitutional rights has become so serious that a federal judge recommends a change of the composition of the California Supreme Court, we have an extraordinarily grave constitutional crisis.

“I recognize that I am writing against a long history of conversations between our court and the California Supreme Court over precisely these kinds of concerns. Perhaps changes in the composition of that court will give it the opportunity to rethink how it disposes of its summary habeas docket.” Judge Bybee, concurrent opinion, page 25, fn 1.