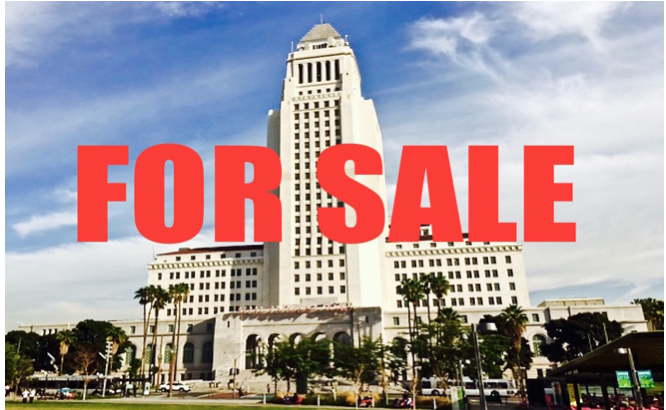 CITY HALL EXPOSED--This is a timeline of City Council and LA City Staff backroom meetings with developers and lobbyists; campaign donations to City Officials; and “spotzoning” approvals for controversial projects.

Released by the Coalition to Preserve LA, Yes on Measure S

Yes on Measure S today releases a special report of official city information that has been released publicly, but unpublished to date. It reveals how LA City Hall works behind closed doors, on behalf of developers and usually without the knowledge of the public, to get around an area's zoning rules.

Most developers donate to LA elected leaders throughout the backroom process.

"Pay to Play In Los Angeles City Government" contains a comprehensive timeline of private meetings and dinners involving billionaire developers, elected City leaders and their staffs. It reveals that private meetings are rarely granted by elected leaders to LA residents who question the developments.

The timeline, entirely made up of official city documents released under the California Public Records Act, or official city campaign finance and lobbyist data published by the L.A. City Ethics Commission, includes:

- Donations received by elected officials from these developers during the process.

- City Council approval of projects achieved by badly bending LA zoning rules, often after private meetings and/or donations from the developer. Nine Los Angeles City Council members were asked by the Coalition to Preserve LA to divulge this public information. All nine failed to release the

subject of these backroom meetings with developers. They divulged only the fact that the meetings happened, in response to California Public Records Act requests by the Coalition.

The nine LA City Council members, of 15 on the City Council, were asked for their official appointment calendars regarding these large-scale developments, because their Council Districts contain a significant number of projects that have been allowed, by vote of the City Council, to ignore city zoning rules.

Some of the nine City Council members responded long after the 10-day deadline under the California Public Records Act (CPRA).

City Councilman Jose Huizar failed for several months to provide his meeting calendar. Councilman Huizar complied with California state law only after attorneys for the Coalition demanded that he divulge this public information.

The official city data provides a direct look at the campaign and lobbying cash spent to influence City Hall leaders as they decide, in a non-transparent and money-influenced system, how and where LA and its neighborhoods should absorb large-scale developments. The official city campaign and lobbying data, and the official calendars released by City Council members, show that collusion between megadevelopers and elected officials is endemic. Zoning is for sale at City Hall. (Read the complete report here.)