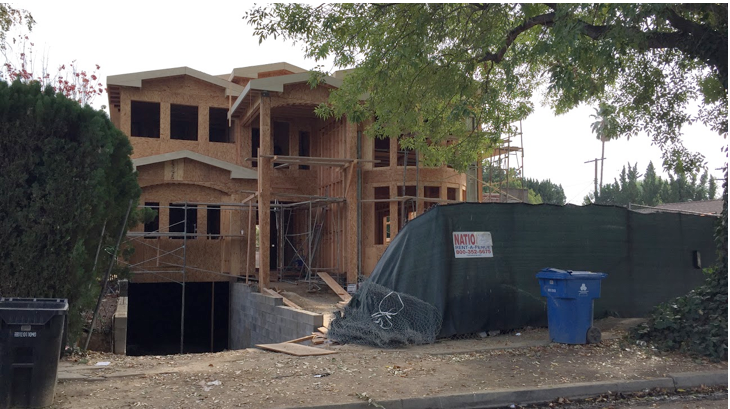 @THE GUSS REPORT-The problem with one particular McMansion currently being built in Sherman Oaks is not that it towers head and shoulders above the houses to its north, the ones to its south, and all the houses across from it on the west side of the street except for one equally obese McMansion.

The problem is that its garage also reaches far lower into the ground because it is subterranean, accessed by a deeply sloping driveway. (Photo above) This is a singularly unique feature when compared to a concentric circle of the 500 nearest single family homes.

Los Angeles City Councilmember Paul Koretz, who authored the city’s porous and ineffective moratorium on McMansions, refused to personally answer direct questions about the property, but denied through a staffer any responsibility for its permit because at the time it was issued, this address was not yet covered by the moratorium. It originally only insulated some communities, including several in the San Fernando Valley…but not this one.

Torn down to make room for the massive McMansion monstrosity was this 1479 square foot, 2-bedroom, 1.75 bath house previously on the lot since 1950.

The old house sold for an astonishing $620,000 in February 2015. The moratorium was approved in March 2015. A permit for the teardown and construction was not finalized until September 2015. But this particular address was not protected by the moratorium until June 29, 2016, according to Koretz’s office. And the actual teardown and construction did not start until around that date.

Koretz’s challengers in the upcoming primary point to this situation as another deliberate Koretz failure, influenced by developer money.

One of those opponents, Jesse Creed, says, “Koretz always takes the easy route through hasty motions and legislative fixes that are worth only the paper they are written on. The toughest issue is under-enforcement, which Koretz has failed to address. This situation of under-enforcement is the developers' dream. Neighbors in my neighborhood, Beverly Grove, have complained to me of houses that are as large as the ones the new rules were supposed to eliminate.” Creed has been endorsed in the race by former LA City Controller Laura Chick.

Another Koretz opponent, Mark Herd, says, “[Koretz’s] McMansion ordinance had a major garage loophole, and yes it was intentional….I’m sure the past will repeat itself if there’s money in it.” Of these three candidates, Herd is the only one who, to date, supports Measure S, an anti-development ballot effort that has long been a thorn in Koretz’ side.

“Unbelievable,” a decades-long resident of the neighborhood said while looking at the construction as children played and parents chatted. “It doesn’t stick out like a sore thumb. It sticks out like a mall parking garage.”

(Daniel Guss, MBA, is a contributor to CityWatch, KFI AM-640, Huffington Post and elsewhere. Follow him on Twitter @TheGussReport. His opinions are his own and do not necessarily reflect the views of CityWatch.) Prepped for CityWatch by Linda Abrams.