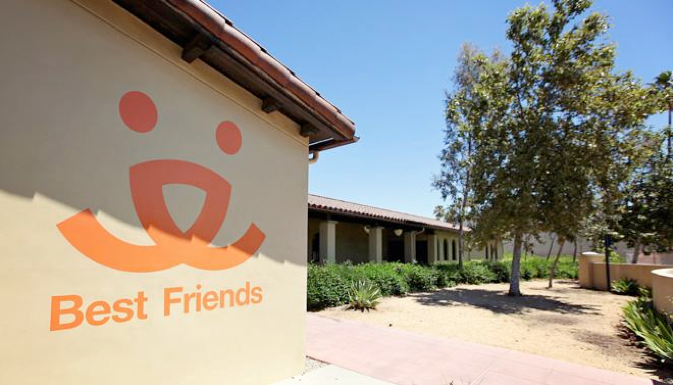 @THE GUSS REPORT-On Wednesday, the Los Angeles City Council will unanimously approve an extension of its contract with Best Friends Animal Society to continue occupying the animal shelter the city built, but could not afford to operate, in the northeast portion of the Valley, also known as the Mission Shelter.

This deal was rigged literally from its 2011 inception, primarily benefitting the city’s politicians and the uber-wealthy Best Friends, at the expense of the taxpayers, animals and clarity on what – exactly – happened to scores of them who were passed through to Best Friends without the same accountability required of all other rescue groups.

How wealthy is Best Friends? According to its most recent tax return, in the five-year period ending in 2015, it took in $313,676,006 in total support -- tens of millions of dollars more than when it came to LA in 2011. That is not Best Friends’ worth; it is just its income, while it grovels for money in advertisements.

The taxpayers of Los Angeles do not collect rent from Best Friends for occupying the Mission shelter, or adoption fees, or dog licensing revenue, or fees that other, genuinely poor, rescue organizations pay to bail shelter animals. The taxpayers also provide Best Friends with free utilities, maintenance and security at the shelter. In 2011, and to this day, the city did its best to prevent a competitive bid from other well-established rescue groups for that tenancy.

In a controversial, marathon-length City Council meeting on August 16, 2011, other LA-area rescue groups said they were blindsided when they learned that LA Animal Services GM Brenda Barnette said she sent out a (still unverified) RFP to more than 1,500 humane organizations to bid on occupying the Mission shelter, but that only Best Friends submitted a proposal.

Teri Austin, who runs the well-respected animal charity Amanda Foundation, claimed (at the 05:15:38 mark of the video) that neither she nor any of the other leading, local humane groups ever received the RFP. Despite her plea, and those from other groups, the City gave the contract to Best Friends without investigating the claims of a rigged RFP process or Best Friends’ relationship with Barnette’s daughter, Mary Alice Davis.

At the core of this rip-off is Los Angeles City Councilmember Paul Koretz, who embodies corrupt government bloat as the lawmaker who forever promises aid to suffering animals, but who always misses the mark like he did with LA’s porous, irrelevant spay/neuter law, licensing and cruelty laws, like his elephant bull hook ban that was so inept, the circus stopped exploiting elephants long before it ever kicked in.

“I will call for an audit of LAAS and (Paul) Koretz will second it…to give him cover,” is what LA City Council president Herb Wesson said when he called me on July 3, 2014 after I collected thousands of signatures for an audit that would largely (but not solely) focus on the city’s dubious dealings with Best Friends.

What Wesson meant by “giving Koretz cover” is very inside baseball. But it runs the gamut on fraudulent Garcetti claims like how LA Animal Services used Best Friends to falsify thousands of pet adoptions as I exposed in this CityWatch article from last October.

The city’s relationship with Best Friends amounts to this: an unaccountable black hole where the city sends thousands of animals, counts them as “adoptions,” while all other groups taking in shelter animals are listed as “transfers.” The city does not require Best Friends to explain exactly where those animals went as all other rescues must. Note: Best Friends ships many of those animals to high-kill shelters in other states. By using this black hole as an illusion for helping homeless animals, LA politicians, including Mayor Eric Garcetti, falsely claim that “adoptions are up, kills are down,” when in fact they have no idea what became of the animals. And City Hall is about to, again, handsomely reward Best Friends for shielding the truth.

The bogus “audit” that LA City Controller Ron Galperin eventually conducted was supposed to be based on a 72-page report requested by Wesson from me, following our lengthy January 3, 2014 meeting in his City Hall office. “Show me where the bodies are buried and we’ll audit it,” Wesson told me. But instead of using the report as a blueprint for exposing corruption, Galperin, Wesson, Koretz – and Mayor Garcetti – used it like a film negative; as a list of things they did not audit.

And even with this rigged game, Best Friends has continued to cheat the city by using the Mission Shelter for activities that are strictly prohibited in its agreement with the city…..and with Koretz’ blessing.

For example, the Mission shelter may only be used by Best Friends as an outlet for adoptions of animals that must first come from the city’s other shelters. Best Friends is explicitly prohibited from using it for animal intake, and the rule is there for a reason: to ensure that city property is used to help city animals. It is a secret known throughout the humane community that if you find an animal in another community, you can dump it with Best Friends, no questions asked. This is why the rule is there.

In this 2013 email and accompanying impound record for a neonatal kitten improperly taken in by Best Friends, you can see the communication between a Best Friends employee and an LA Animal Services supervisor generating false impound numbers, a practice done thousands of times over. This activity was known to Koretz and the other city officials, including Galperin, who refused to audit it. The impound sheet shows the empty page in the city’s animal inventory system for one of those kittens. If the kitten had, as required, been processed through a city shelter, this page would have a photo, intake notes, a microchip number, inoculation and veterinary information, and the date when the kitten left the shelter.

It is blank because the kitten never came in through the shelter….as required.

It isn’t that Best Friends was ignoble in doing this. It is that they and City Hall were dishonest with the public, and it resulted in the deaths of scores of city animals whose turn it was to be taken by Best Friends, but weren’t because they were deemed “less desirable,” which means they require more love and veterinary care than a kitten to get adopted. And it costs money, even when Best Friends sits on a mountain of gold.

At the final 2016 meeting of Koretz’ Personnel and Animal Welfare Committee, Koretz said that these two documents were “not credible” and that he “had not seen them before.”

But which is it, Mr. Koretz? If you had not seen them before, how do you know they’re not credible?

In fact, Koretz is lying in both instances because these two documents are on pages 21 and 22 in the 72-page report requested by Wesson from me in 2014 and provided to him, Galperin, Wesson and Garcetti at that time.

For two and a half years, Koretz actively ignored this and a wealth of other Best Friends-related corrupt practices and now recommends that Best Friends gets its contract renewed with the city on Wednesday.

Creed has been endorsed in the CD 5 race by former City Controller Laura Chick.

Koretz, Mayor Garcetti, Best Friends and LA Animal Services have refused to respond to direct questions regarding this matter.

(Daniel Guss, MBA, is a contributor to CityWatch, KFI AM-640, Huffington Post and elsewhere. Follow him on Twitter @TheGussReport. His opinions are his own and do not necessarily reflect the views of CityWatch.)Edited for CityWatch by Linda Abrams.