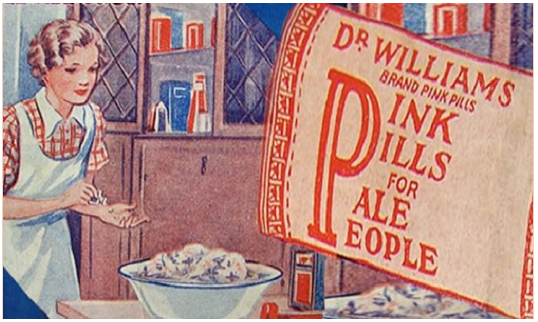 PLATKIN ON PLANNING-Los Angeles is heading toward a perfect storm of gentrification, well-camouflaged behind spurious claims of boosting transit ridership and addressing LA’s housing crisis through zoning and environmental deregulation.

This perfect storm is propelled by huge tail winds from the State Legislature in Sacramento, with big city Democrats fronting for the real estate interests that fund and mentor them. San Francisco State Senator Scott Wiener and Los Angeles Mayor Eric Garcetti are their current favorites, but many more are lining up at the trough.

To begin, there is a treasure trove of successful programs that they could turn to if they really wanted to increase transit ridership and address the housing crisis, but they are totally mute on these options.  As for their cheerleaders, their silence is also deafening since the following public programs are at odds with their “build more market housing” miracle mantra for LA’s urban ills.

Increasing Transit Ridership through the following is not on their to-do list:

The programs for fixing LA’s housing crisis are also well known, but are predictably ignored by the build-more-market-housing growth machine of real estate investors, building industry lobbyists, neo-liberal academics, Democratic politicians, and groupies. Their goal is to sweep away zoning and environmental laws that developers don’t like, not spend public money on unprofitable affordable housing projects. This is why they never call for the following:

But, instead of these obvious programs, Sacramento and LA’s City Hall have only provided us with real estate-related programs. hey may have different names, but they are united by a single purpose.  Their goal is to sweep aside zoning and environmental laws disliked by real estate developers, so they can build what they want, where they want, regardless of the consequences. These ordinances include the following, with more on the way from the build-more-market-housing crowd’s current Wunderkind, Scott Wiener.

Community Plan Updates are appended with lengthy land use ordinances that up-zone and up-plan hundreds to thousands of parcels at one time.

Density Bonuses are the local application of Senate Bill (SB) 1818, which allows, with no effective right of appeal, the waiver of many zoning provisions if developers promise to include a small percentage of low income units in their buildings. This ordinance is now being supplemented by a draft Value Capture Ordinance that would expand the zoning waiver options. Since neither ordinance contains any on-site inspection requirements, there is no way for the public or the City to verify that any of the new units are affordable and that their tenants are officially registered low income Angelinos.

Transit Priority Areas (TPAs) implement SB 743 in Los Angeles. This State law and its local implementation ordinance applies to nearly all of Los Angeles west, south, east of the downtown because all local parcels are located within a half-mile from an existing or proposed rail or bus stop. In those areas residential, mixed-use, and employment centers are exempted from two California Environmental Quality Act’s impact categories: parking and esthetics. 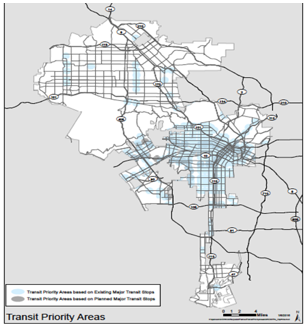 Transit Oriented Communities, the implementation of Measure JJJ, allows increases of up to 80 percent in the number of permitted units in exchange for an undefined inclusion of affordable housing units.  Like similar programs, it, too, does not require any on-site inspections to confirm the presence of dedicated affordable units or qualified low-income tenants.  Like Transit Priority Areas and the proposed Senate Bill 827, described below, this Los Angeles ordinance also applies to neighborhoods that are up to a half-mile from a subway and light-rail station or a quarter-mile from an Express bus line.

Transit Neighborhood Plans are intended to reduce zoning requirements at light and heavy rail stations, such as the Expo Line.  While they are supplemented by streetscape plans, these off-site improvements are only unfunded guidelines.  They are not backed up by any public funds covering the design, construction, operations, or maintenance of any streetscape features.

Re:code LA will eventually expand the list of permitted uses on most private parcels by eliminating the need for a variance to build non-permitted uses. Furthermore, even though re:code LA is billed as a zoning simplification program, it has already replaced the existing R-1 zone, which applies to about three-quarters of all single family homes in Los Angeles, with 12 alternate zones.

The Pitfalls of Scott Wiener’s Perfect Storm: The perfect storm headed toward Los Angeles is based on proposed legislation sponsored by State Senator Scott Wiener. His draft SB 827 bill grants a cost free and highly lucrative zone variance to private parcels up to a half-mile from a subway station and a quarter-mile from an express bus line. Any parcel in these “transit rich” areas that has received a “housing opportunity grant” will then qualify for the elimination of zoning provisions for design, building mass (Floor Area Ratio), some building height, and parking.

More specifically, in practice Wiener’s bill allows apartment projects that apply for an on-menu or off-menu density bonus -- as low as 5 percent -- to evade most zoning requirements in perpetuity. Since the City of Los Angeles automatically grants all density bonus applications, rejects all appeals, and never dispatches an on on-site inspector, this legislation will become a cornucopia for those who own private parcels zoned for apartment buildings. The value of their properties will soar. They can then sell them at an enormous financial gain, dodging new property taxes because of Proposition 13. As for new housing construction, most flippers could care less. What a deal!

While no one yet knows SB 827’s final provisions, we can already foresee its other major pitfalls:

Pitfall #1: Senator Wiener and his fan clubs have not given the slightest thought to the additional public infrastructure and public services that new transit-adjacent buildings and residents require.  When the number of residents increases in areas near subway station and bus stops, these neighborhoods will need more garbage pick-ups, street sweeping, schools, parks, recreation centers, senior centers, libraries, emergency services, and so forth. The water mains, gas and sewage lines, and storm drains also need upgrading, as well as infrastructure for electricity and telecommunications. But since no planning or public funds are allocated through SB 827 for these many categories, we can expect a dramatic decline in the quality of life if/when the bill becomes a catalyst for new market-driven apartment buildings.

Pitfall #2:  SB 827 does not include any on-site inspection programs. Angelinos will have no way to verify that the pledged affordable units that trigger de facto zone variances and a resulting real estate bubble are based on actual affordable units and low-income tenants.

Pitfall #3:  We will also have no way to know, if as claimed by Senator Wiener, his financial backers, and his disciples, that people who move into new, transit-adjacent market and luxury housing will routinely abandon their cars to walk up to a half mile to catch a train station or bus. Furthermore, if this behavioral information is eventually collected, I predict that most well-off tenants will continue to drive their fancy cars for most trips. If so, SB 827 contains no repercussions if the new tenants seldom use transit or if the affordable units are soon rented out at market rates.

Pitfall #5:  Because SB 827 treats transit corridors as accessories to real estate speculation, it will heavily politicize transit planning. Developers will heavily lobby transit agencies to ensure that the corridors they want to gentrify will be upgraded to express bus service or rail.  At the same time, some communities interested in protecting low-rise apartment buildings already housing frequent transit users would be forced to bizarrely lobby for downgraded transit service. After all, if their bus service falls below 15-minute headways, then SB 827 would not apply, as well as Transit Priority Areas and Transit Oriented Communities.

My conclusion about SB 827, by itself, and in combination with the land use ordinances I reviewed above, is that it is one of the dumbest pieces of planning legislation I have encountered in over three decades of city planning. Like all miracle cures, it won’t work. It might make some landowners and landlords rich, but it will not increase transit ridership or reduce the cost of housing.

(Dick Platkin is a former Los Angele city planner who reports on planning controversies in Los Angeles.  Please send any comments or corrections to [email protected].) Prepped for CityWatch by Linda Abrams.