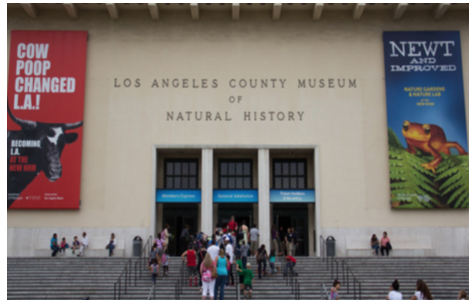 Two weeks ago, the LA County Board of Supervisors raised from $12 to $15 the price of regular admission to the Los Angeles Natural History Museum, a taxpayer-funded public institution owned, operated and maintained by the County of Los Angeles. Under the new pricing plan, it will cost $60 for a family of four to make a visit.

Is that a reasonable price?

Not if you’re one of the 70,000 families in Los Angeles suffering episodes of “reduced food intake” – going hungry for lack of funds to buy groceries, as described in a recent report from the LA County Department of Public Health.

If those 70,000 families don’t have enough money to keep their kids from going to bed hungry, where are they going to get the $60 necessary to visit the NHM?

Many of those families, whether because of immigration status or not knowing about benefits for which they are eligible, don’t have EBT cards for which the museum offers free admission.

The California Science Center, which is adjacent to the Natural History Museum and run by the state, has free admission, and they have more than double the NHM’s number of visitors annually. If California can keep its science museum free, why can’t LA County keep its natural history museum free?

The great museums of Washington D.C. are free, including the Smithsonian.

When the London Natural History Museum went free in 2001, attendance sky-rocketed immediately by 79%—and it has since continued to grow.

One argument in support of the new NHM admission fee is that it will be accompanied by a new policy of making the museum free everyday between 3 p.m. and 5 p.m., but most working parents can’t get away during those two hours. Even if they can, the 3-5 p.m. time window means that the visit will be limited to 2 hours. The museum houses 35 million specimens and has at least twenty wonderful exhibits. To see all that, you’d have to run without stopping to read any of the exhibit explanations or to participate in any interactive exhibits.

What about school field trips? Kids get in free then, so what are we complaining about? Well, not all teachers make that particular school trip and even if they do, the visit is a one-time event of relatively short duration.

Museum membership? All you have to do is join, then you can spend as much time as you want lingering over the exhibits. Again, prohibitively expensive for someone who can’t afford to buy enough food for the kids.

What about NYC’s American Museum of Natural History? They charge a hefty fee but still manage to be one of the most visited museums in the world. Doesn't that prove that admission price doesn't hinder visit rates?

But their attendance might be even higher if they went free. Also, they're located in Manhattan, a high-density, affluent area which allows for high foot traffic despite high admission fees.

The worst thing about all this is that the LA County Board of Supervisors isn’t even trying to make the Natural History Museum free. They’re not even discussing it. They approved the recent price hike in silence, without a single question or word of qualification.