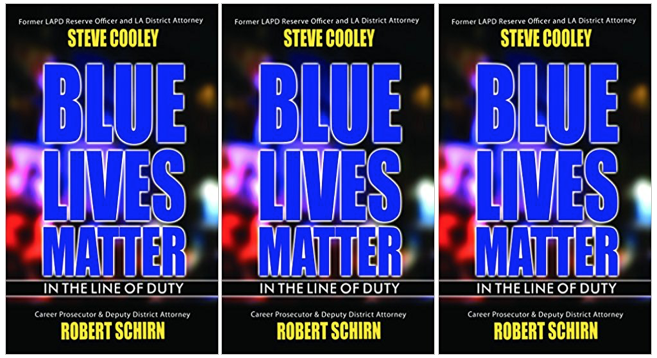 I asked to interview him to review the book and learned that his father was an FBI agent, which undoubtedly fired the passion for law-enforcement that led Steve to serve as a Los Angeles Police Department Reserve Officer for over five years while he was studying law at USC. He told me he decided then that, if he didn't pass the California State Bar exam the first time, he would either join LAPD as a full-time officer or apply to the FBI.

It is no surprise that the many recent disturbing events taking lives of police officers, sheriff's deputies, and other law-enforcement personnel have touched him deeply. Cooley says this shared impetus caused him and career-LA District Attorney Prosecutor and Office Historian Robert Schirn to join forces to produce Blue Lives Matter, described as the first in a series exploring line-of-duty deaths in depth with up-close details and allowing readers to ride along with these heroes on their "end of watch" tours. It includes the story of Liberty, an LAPD K-9 who gave her life saving her partner.

Here's how Blue Lives Matter starts: Officer Bernie Bangasser of the El Segundo Police Department had the morning watch at the station's police radio desk. At approximately 1:30 a.m., he heard a desperate voice over the police radio: "Ambulance!" it gasped. "Rosecrans...Sepulveda!" And then silence.

"The next voice Officer Bangasser heard over the police radio was that of Officer James Gilbert, who yelled, "Send an ambulance fast, Bernie! Rosecrans, just west of Sepulveda! It's Unit 35! Both boys have been shot! It's bad!"

The two officers who lost their lives that night were Richard Phillips, 28 and Milton Curtis, 25. Both had wives and small children waiting – hoping -- for them to come home. But the murder of these officers was just the finale to a night of rape, robbery, kidnapping and auto theft by Gerald Mason.

Blue Lives Matter promises never-before-released details on cases which include an execution during a drug deal; an off-duty cop gunned down; a case solved 40 years later; a cop killer who fled to Mexico; and an officer killed in front of his own son.

This is not just historic story-telling nor is it a political statement. It is a serious and fast-paced book, filled with intensity, compassion and focus on those who chose not to back down in the face of danger. Each incident includes a discussion of tactical lessons learned and the often-overlooked impact these deaths had on survivors, which makes it as relevant today as when they occurred.

The purpose, the authors say, is to make Blue Lives Matter: In the Line of Duty a "guidebook and training manual for departments, as well as a memorial and tribute to those who made the ultimate sacrifice."

I have reviewed other books that have touched me deeply; but I have to admit that I was not emotionally prepared for the impact of this one.

When I joined the District Attorney's Office as a brand new prosecutor, I became emotionally involved in many of my cases. I was unprepared to being exposed to the large number of persons committing murders, rapes, robberies, serious assaults and selling large amounts of narcotics. Gradually a certain acceptance and cynicism set in as I was prosecuting these cases on a regular basis. I became hardened to these crimes. I prosecuted all these cases thoroughly and professionally but without becoming personally or emotionally involved, with one exception.

Robert Schirn and Steve Cooley, being career prosecutors, don’t apologize for writing Blue Lives Matter in the manner and style of an attorney, "We are direct and straightforward in our approach and we have attempted to lay out the facts and the court proceedings without undue embellishment.”

“We have avoided literary devices that would overly dramatize the deaths of the officers," they explain. "The death of an officer and its impact on family, friends and society is dramatic enough that additional emphasis is not necessary." 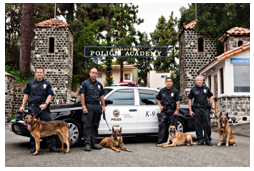 The K-9 chapter, devoted to Liberty and her partner, will not allow any reader to remain untouched, whether or not you are a dog enthusiast. And for those who have been K-9 handlers or just shared their life with a canine companion,  every news report involving a K-9 in the future will become more personal and compelling.

If you have law-enforcement officers in your family or are fascinated by "Law and Order" you will probably -- like me -- read this paperback book straight through. I have not provided details on the cases because I don't want to spoil the experience for readers, but here’s just a glimpse of the lasting impact of fatal officer shootings:

Detective Tom Williams was buried at San Fernando Mission Cemetery on November 5, 1985. Nearly 1,600 mourners attended the memorial and graveside services, including over 1,000 officers from police agencies throughout Southern California.

Ryan Williams turned age seven on November 7, 1985, and forty North Hollywood detectives gave him a surprise birthday party at his residence in Canoga Park. He blew out candles on a birthday cake and received numerous presents, including a brand-new bicycle. Young Ryan was able to smile for the first time in over a week . . .However, it would be a long time before Ryan could recover from the death of his father. In a religious class that weekend, the students were asked to draw pictures of themselves. Ryan drew a picture of a little boy standing by a grave.

This book doesn't need added drama or emotional manipulation because the reality is so moving. Have a box of tissues nearby!

For more information about Blue Lives Matter, see the website at www.bluelivesmatterbook/com.