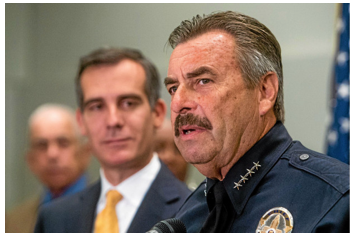 PREVEN REPORT--During the past few years, according to a federal lawsuit filed last year by the Los Angeles Police Protective League, four separate police captains serving at various times on a disciplinary panel called the Board of Rights have come forward to accuse LAPD Chief Charlie Beck of pressuring them to return guilty verdicts and then punishing them in cases where they refused to tow the line.

It was often in high profile, highly controversial cases that Chief Beck pushed for guilty verdicts—apparently as a way of placating the public.

Does Mayor Garcetti believe the police captains who have accused Chief Beck?

It’s a fair question, because last week Chief Beck denounced as a spreader of “damned lies” LAPD Captain Lillian Carranza who came forward with allegations that top officials in the LAPD have been cooking the books, under-reporting the prevalence of violent crime in Los Angeles.

Her claims are in line with findings from a 2015 audit by the LAPD inspector general, so to dismiss her claims without further study seems rash at best—and indeed the Police Protective League has sided with Captain Carranza in the dispute. Where does Mayor Garcetti stand?