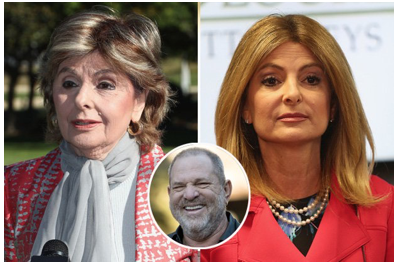 SPECIAL TO CITYWATCH--Gloria Allred is an institution.  She didn't invent, but she did perfect, the art of lawyering in the court of public opinion.  She knew how and when to hold a press conference.  Allred knew the right cases to pick—sympathetic victims against usually famous and powerful men—Bill Cosby, Roman Polanski, and Rush Limbaugh, to name a few. (Graphic above l-r: Gloria Allred, Harvey Weinstein, Lisa Bloom)

She knew how to use the media to gain notoriety for her brand and most of all sympathy for her clients.  And build a brand she did.  Allred is synonymous with the hard-charging, fearless attorney who on behalf of a client will use the power of publicity to isolate a high-profile target and negatively affect the public’s view of the target.  It is a style which has been honed over time to great effect.

Lisa has been trying to mirror her mother's act.  Like her mother, she does not hesitate to use the power of the media on behalf of clients who had suffered from domestic violence or discrimination. She also wields influence through the frequent news conference in her office with high-profile clients.

Enter Hollywood mogul Harvey Weinstein, who is facing allegations of rampant sexual harassment and rape—and until recently, one of Lisa Bloom’s clients.

According to many in Hollywood, Weinstein has long been known to be a bully.  The fact that many actresses, producers and industry executives alleged that he was a sexual predator was apparently the worst-kept secret in town.

Bloom has advised Weinstein on “gender and power dynamics” and continued to do so even after learning from him about his sexual abuses.

As part and parcel of the representation, Weinstein also signed her to a development deal with his company.  Keeping a powerful force on the sidelines.  Brilliant Harvey!

Bloom is no longer advising Weinstein.

But before she stopped working for Weinstein,  Bloom presented a plan to the Weinstein Company’s board of directors designed to undermine her client’s accusers in the news media by planting pictures and stories showing their chumminess with him.  Perhaps this was prompted because Bloom believed this was the way she thought high-profile persons who were her ordinary targets of her legal and media blitz did react, or should have reacted, when she challenged them in the court of public opinion.

While her representation of Weinstein received widespread publicity and subsequent criticism, it wasn't the first time that Bloom had deviated from her carefully created image as a defender of women against harassment and abuse.

Bloom represented another high-profile person accused of sexual harassment: Roy Price, then head of Amazon Studios.  In an unsettling parallel to the tactics she was said to employ while defending Weinstein, Bloom had allegedly spread false rumors about a journalist writing an investigative story about Mr. Price.

However, as the media glare intensified, Bloom resigned as Price's attorney. She claimed the representation had ended before the allegations against Price were made public, but whatever her underlying motivations, Bloom reportedly did something that her mother would never do: challenge the credibility of victims of sexual abuse.

Allred was a purist; she never strayed from her representation of the underdog instead of the rich and powerful.  Bloom took the opposite tack, choosing to use her legal talents to represent high- profile clients accused of using their positions of power to subjugate the women.

The reaction of Allred, never one to be tone deaf, was pitch perfect.  When it became known that her daughter was advising Weinstein, she released a statement saying she not only would have declined to work with Weinstein, but would not hesitate to represent one of his accusers, “even if it meant that my daughter was the opposing counsel.”

Allred later posted a statement on Facebook that said, “Nothing that has happened in the recent past has altered my views of Lisa's commitment to protecting and advancing women's rights.”

Bloom may have set out to be like her mother like Frank Sinatra Jr. sought to be his father.  The originals are so much better.

(Eric W. Rose is a Partner at Englander Knabe & Allen and specializes in reputation issues and crisis management.)