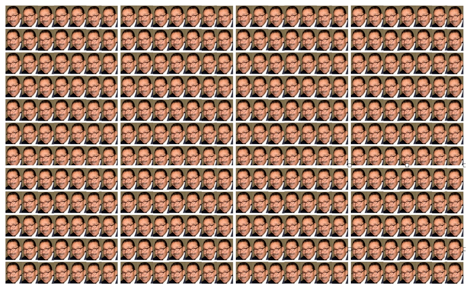 THE PREVEN REPORT--The LA City Charter requires that when the Mayor of Los Angeles departs the state of California, he or she stops being Mayor … with the role passing to the City Council President.

It’s a serious rule. Since he was inaugurated on June 30, 2013, whenever Mayor Garcetti has left the state, he has sent a formal letter to City Council President Herb Wesson announcing the precise date and time of departure and return—down to the minute.

A public records request we made recently produced a stack of every notice of absence sent by Eric Garcetti to Herb Wesson to date. Add up the days on which Herb Wesson took over the role as Mayor of Los Angeles and you get 336—just a few weeks shy of a full year (and that’s not including any travel the Mayor may have done during the past month). (Graphic above reflects that absentee record … one Wesson photo for each day absent … total: 336.)

When Garcetti’s out of town, Wesson has—and uses from time to time— the power to approve ordinances and legal settlements. It was Wesson, for example, who signed the recent controversial $6.5 million dollar payout to an injured cyclist named Peter Godefroy. There was plenty of time for the Mayor to sign that settlement himself after getting back in town, so it's not clear why he had Wesson do the signing, but that’s not the issue at hand.

The real question is, should Herb Wesson get paid for his 336 days of service as Mayor of Los Angeles? Mr. Garcetti’s annual salary with benefits is $241,000 which comes out to $660 dollars per day. That translates into Garcetti owing Wesson about $221,852 dollars. Tip not included.