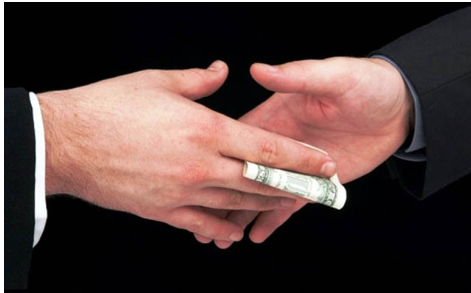 VOICES--Voters in Eastside and Northeast LA are now casting ballots in a special election for the state legislature. The neighborhoods covered by California's 51st Assembly District are overwhelmingly Democratic and progressive. Support for clean energy and opposition to fracking run high. So when the foul smell of money from Big Oil came oozing into the district's contest last week, it set off some alarms.

On September 12, more than $30,000 poured into a campaign committee set up to support and elect Wendy Carrillo in the election for Assembly District 51. Closer examination of the records filed with the State of California shows that $5,000 of that money came directly from Chevron. Carrillo also accepted a contribution directly from the campaign committee back in June, after the Chevron money came flowing into its coffers.

It may be news to some Californians that corporations can give directly to campaigns for elected office in our state and to outside committees set up to support and elect favored candidates. That's not something to be proud of in our faulty system for financing campaigns and disclosing influence money. Still, at least they face a cap in legislative races of just $4,400 in direct donations per election. That amount doesn't apply to outside entities that stand just an arm's length from campaigns, which can accept unlimited amounts.

There are two things striking about how Wendy Carrillo took the money from Chevron. First, by accepting money from an entity that took more than the $4,400 limit for a single election, she indicates a willingness to go around the campaign-finance limits. She also signals openness to take far greater amounts of such money through indirect channels at future stages of her campaign.

In addition, the use of a secondary channel to funnel the Chevron money to her campaign, or to create a "dirty money" pipeline, is revealing. Why not take the money directly? The use of the indirect route for taking Chevron money suggests Wendy Carrillo or her advisers are aware of the toxic fallout from accepting such money, but may have hoped that by processing the money through an intermediary, they might avoid sunlight or having to answer questions.

What are the dangers of money from Chevron or other Big Oil drillers in California politics? Well, one major concern is fracking. When I served on the Glassell Park Neighborhood Council, we passed a resolution opposing the practice by oil companies and their contractors of pumping scarce ground water deep into the earth at high pressure to fracture porous rock deposits to release petroleum. Not only are such operations prone to despoiling land and putting subterranean aquifers at risk, but also they cause huge deposits of dirty water sullied by chemicals that stick around like ulcers.

The legislature plays a key role in setting policy that can either rein in oil companies and their effects on the environment in California, or not. The latter option, lax treatment of drillers, has been the name of the game for most of the past half-century in Sacramento.

What is one of the few restraints on their behavior? Democrats from diverse, urban districts with a commitment to getting California's power grid off of fossil-fuel dependent sources of energy. As Democrats have gained strength in state government, efforts by oil, coal, drilling, and pipeline industry forces have redoubled to find Democrats who can be peeled away from the push for clean energy called for by the party's platform and promoted passionately by many of the grassroots party activists who do the work of winning campaigns in the state.

For Wendy Carrillo, taking money from Big Oil contradicts the story she often tells about why she's running for office in the first place. Carrillo moved into the 51st District in 2017 after finishing 6th in a campaign for Congress. In that campaign, she attributed her quest for public service to weeks she spent in 2016 in South Dakota working alongside Lakota tribal leaders and allies to stop the intrusion of the Dakota Access Pipeline under the Missouri River so as to threaten the water supply of the tribe and nearby residents.

"The resiliency of everyday people from all backgrounds standing together to protect our natural resources gave me courage," Carrillo wrote in an online posting in December 2016. She was rallying readers to support her campaign for Congress.

Now, less than a year later, Carrillo is running for a different office and appears to have backtracked on her commitment to holding oil companies accountable by taking money from Chevron. If a candidate will sell out her principles for $5,000 to Chevron, which polluter is next? And if she will make such a bargain now, what might such a candidate actually do as a state lawmaker? Whatever the answers, they raise serious questions for the campaign of Wendy Carrillo.

Here are the 3 transactions that reveal the pipeline of Big-Oil money into efforts to support and elect Wendy Carrillo. 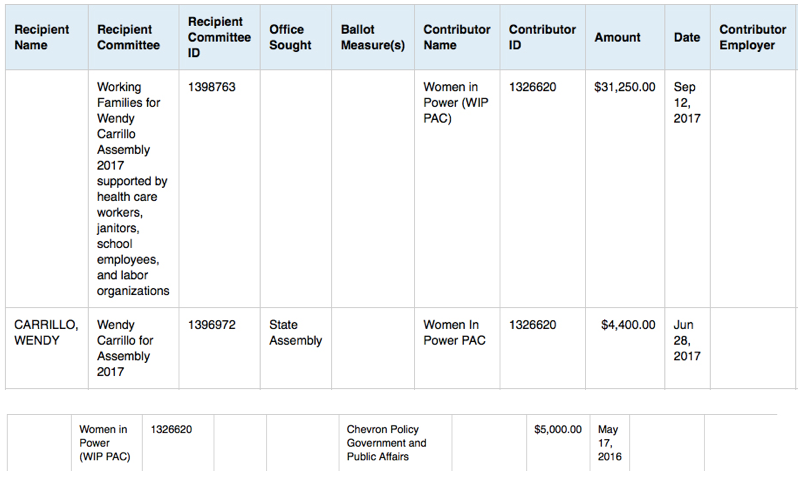 (Ruby DeVera is former chair of the Glassell Park Neighborhood Council and a longtime advocate for veterans, immigrant families, and Democratic causes. She has served elected officials as a staff member at L.A City Hall. Views expressed and information provided do not necessarily reflect those of CityWatch.)