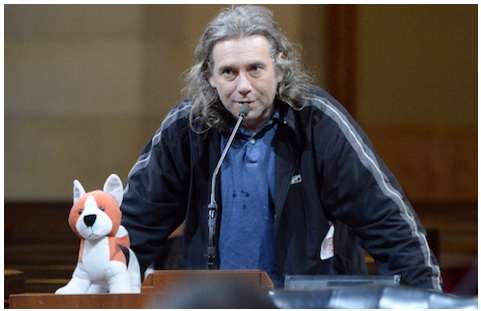 @THE GUSS REPORT-Kevin B. Taylor’s job as Senior Trial Counsel for the State Bar of California is to mete out punishment for misbehaving attorneys. He may soon find himself in a world of hurt for his own misconduct.

The question is how did it happen, and was he duped by the same person who duped an LA Times reporter into writing an untrue article about the same case six months ago?

Last week, Taylor sent a certified letter to Wayne Spindler (Photo above), an Encino immigration attorney and notorious thorn-in-the-side of LA Mayor Eric Garcetti and the Los Angeles City Council. It advised Spindler that Taylor was pursuing punishment against him for the two misdemeanors Spindler was convicted of in July.

The first problem is that Spindler has no such convictions.

The second problem is that the certified documents Taylor included with his letter to Spindler prove it.

Taylor, who has the power to ruin attorneys’ careers and lives, either did not read his own certified documents before signing and filing his disciplinary letter, or he illegally pursued punishment knowing that the allegations in it were untrue, putting him in the position of being labeled incompetent or corrupt.

Taylor did not reply to voicemail messages I left for him last week. The Bar’s Strategic Communications office responded to questions I submitted to it….at precisely 5 p.m. on Friday, i.e. closing time, stating that Taylor filed the complaint “in error” and that it was being corrected.

That explanation is spurious because Taylor’s disciplinary letter was not inadvertently filed; it contains precision language falsely outlining the reason for his pursuing punishment of Spindler:

This and other declarations in Taylor’s letter are 100% untrue, directly refuted by certified materials in his possession.

Was Taylor duped by the same person, or people, who earlier this year duped LA Times reporter Emily Alpert Reyes into publishing a similarly false article about Spindler’s case?

The culprits, Spindler says, where most likely Eugene Hall, Jr., the veteran LA prosecutor who unsuccessfully pursued him on charges of illegal possession of a banned firearm and oversized bullet magazines, and/or Rob Wilcox, the Communications Director for Hall, Jr.’s boss, LA City Attorney Mike Feuer.

Spindler bought his gun in the 1980s, which predates its ban, and the magazine clips prior to their being banned by LA City Council in 2015.

On March 29, 2017, LA Times reporter Emily Alpert Reyes wrote an article which stated, “Spindler was charged with a misdemeanor and is scheduled to be arraigned in April,” attributing that information to Wilcox.

But that claim was untrue both at the time Reyes’s article was published, and remained untrue for the six days following it. Spindler says that only Hall, Jr. and Wilcox would have been privy to case information to leak to Reyes, who published her article without fact-checking it against the court’s website.

Spindler alleges that City Attorney Mike Feuer’s office never intended to file that charge against him, but threatened to do so, in violation of State Bar of California ethics guidelines, as leverage to get him to drop his civil rights lawsuits against the city, a viable claim since Spindler turned in his grandfathered firearms in compliance with a court order more than a year earlier, in early 2016.

Feuer’s office did not actually file the charge against Spindler until spring 2017, mere hours after my column exposing Reyes’s article as untruthful, nearly a week after it was published.

What started out as the threat of a felony charge against Spindler by LA County District Attorney Jackie Lacey, became a watered-down misdemeanor charge by City of LA deputy prosecutor Hall, Jr. and wound up as a non-criminal citation after Hall, Jr. left a voicemail message for Spindler the first week of July 2017 in which he stated, “…I was able to get you pretty much everything you wanted. I was able to get you an infraction offer with a fine …”

Eventually, as I was first to reveal, Spindler pled no contest to that non-criminal disturbing the peace citation, even though no such disturbance of the peace occurred or was ever alleged, a sort of consolation prize for a prosecutor seeking to save face as well as his “win” rate.

The few hours Spindler spent at a police station during the booking process more than offset his fine.  He agreed to surrender additional magazines, even though the LAPD hesitated to accept them due to a pending legal challenge to LA’s recent ban of them.

Two months have since passed.

Did something subsequently happen between the combatants, LA City Council president Herb Wesson and Spindler, to possibly trigger Taylor’s bogus attempt to discipline Spindler? Quite possibly.

That’s one heck of a coincidence, nearly two months after the case resolved.

The FBI should investigate whether Taylor made other life-altering “errors” in cases he reviews, and the State Bar of California should put Taylor on paid leave until we find out.

Each of the before mentioned persons did not respond to a request for comment, although they may be forced to speak if Spindler files suit for damages, as he has indicated he might. Reyes’s boss, newly appointed Los Angeles Times CEO and Publisher Ross Levinsohn, blocked me on Twitter when I asked about her untruthful reporting.