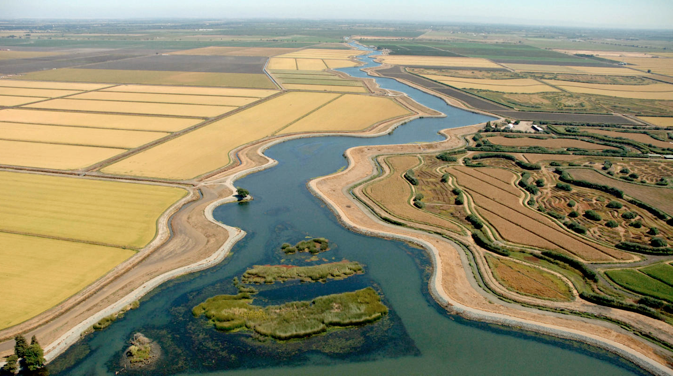 The CEQA challenges are now finished, and the resulting a 100,000 page document (I kid you not) is on the Governor’s desk. As General Manager of the Metropolitan Water District, Jeffrey Knightlinger quipped at our DWP meeting that the stack of paper is about 40 feet high, roughly the same as the diameter of the Delta tunnels (irony intended).

For reasons that I do not purport to understand, the (Chicago) LA Times is still opposing the tunnels, clear proof that the owners of the Times do not reside in Southern California.

The reality, however, is that we in Southern California really need to protect access to the water flowing from the Northern California mountains through the Sacramento River and the Delta, into the California Aqueduct to the Metropolitan Water District. In the likely event of continued drought this water is critical for us and for our children as global warming increases mountain temperatures.

As a third generation Californian, I am painfully aware of the North/South political split in our State that has existed forever. Folks like my late grandfather up in Orville wanted to literally divide the state into two, and I have some friends in Sonoma County who still believe it would be a cool idea. But just like we have to live with Northern California and its politicians because of their water, they have to live with our need for that water in order to fuel the State’s economy. Not to mention that the entire state needs to do something with the water supply. Northern Californians don’t like floods and busted levees.

Truth is, Southern California is a desert, and there are only a couple of sources for water to feed the roughly 50% of the State of California’s population that resides within the six counties of Ventura, Los Angeles, Orange, San Diego, Riverside and San Bernardino. Those six counties (actually only portions of Ventura, Riverside and San Diego) constitute the membership of the Metropolitan Water District, or Metro, as it is often called.

For all the political talk about the Delta Tunnel, most Angelenos have no idea where our water actually comes from, or how the DWP fits in with the Metropolitan Water District. What’s even stranger is my friends in Northern California seem willing to ignore the fact that Brown’s WaterFix will help them too. The levee system and the Delta are a mess up there, and Brown’s proposal will help them fix their problems as well as help Southern California.

If you look at the big picture, the Metropolitan Water District generates over 50% of Southern California’s water. Metro’s sources for this water consist of the California Aqueduct and the Colorado River Aqueduct. The balance comes from local sources and the DWP’s Owens Valley Aqueduct.

Because of multi-state agreements, Metro’s share of the Colorado River is a percentage of what flows through the river. Based on these agreements, this has usually translated into about 50% of a baseline amount. On the other hand, as drought becomes more persistent in the Western states, those amounts will probably go down over time.

The good news about the Colorado River water is that Metro has a huge storage capacity, and in fact maintains a permanent six months’ supply in storage just in case of an emergency. So from an availability factor, it is great that we will always have access to the allotment from the Colorado River.

The situation from the California Aqueduct is another matter. Water entering the system from the mountains and rivers in Northern California is capable of producing a huge amount of water per year, but the amount and flow of that water supply is intermittent. In other words, what’s in the system depends on how much rain and how much snow we get, as well as when those events take place. The system itself doesn’t have a lot of permanent storage built into it.

The astonishing good news to me, and hats off to the water folks, is that while our population has increased from about 13 million people in 1985 to some 19 million people in 2015, our water demand has been essentially flat. Proof that all of those efficiency measures have worked.

One of the biggest factors in how much water we can get from the Delta, and for that matter, the Owens valley, are generically referred to as environmental issues. These types of concerns led to the passage of CEQA (California Environmental Quality Act) back in 1970, designed to make state and local governments identify and mitigate the environmental impacts of their decisions.

Most people I know have no clue what CEQA means beyond the name, and it’s difficult to get an objective explanation, so if you want to know more, there’s a good starting point here.

In addition to providing a legitimate curb on government destroying the environment, CEQA has also made a bunch of lawyers rich and created entire new political and governmental bureaucracies -- thus the some ten years and 100,000 pages of CEQA documents on Governor Brown’s Delta tunnel project.

Like any huge capital project, WaterFix is going to be paid for by ratepayers in their monthly bills. Small price for ensuring a reliable water supply, and in retrospect it’s a darn good thing that we built the Colorado River Aqueduct and the California Aqueduct. So, if it isn’t really about the money, then what is it?

I think that using the magic word “environment,” we have created an entire environmental business model that has little to do with rational anything.

At this point, there are a number of non-profit organizations whose livelihoods consist in fundraising and litigation over the environment. There are also a number of class-action attorneys specializing in this area. Further, there are agencies like California’s Department of Fish and Wildlife, the U.S. Fish and Wildlife Service, and a host of others, whose staffing and existence are dependent on staying in the limelight come budget time.

Two examples. First, I don’t know why the folks up north keep whining about the delta smelt. This isn’t about smelt. Heck, right now I am told there’s a hatchery that produces smelt each year that can’t be released into the water supply because the regulatory agencies won’t let anyone do it. C’mon.

Second, the DWP and the Owens Valley. The issue of LA stealing their water a century ago is over. These days the issue is a small group of politicians controlling a water district up there that they use to blackmail money out of LA ratepayers. They have evolved from screaming about the water grab to ‘dust mitigation’ and have made a bundle.

My point is that how much water we get in Southern California is more than just a political issue. There is a huge amount of water from Northern California that simply goes out into the ocean or floods because it can’t be captured or managed. Just ask the folks in Truckee or Sonoma County after this week’s massive rainfall. Wouldn’t it be nice to have a system that can helps manage these huge fluctuations in water? Enter Brown’s plan.

In terms of planning ahead, you may have seen on TV how they measure the snowpack in the Sierras using the depth of the pack, which gives an indication as to the existence and/or severity of a drought.

The reason that the snowpack is critical is that the snow is a great way to store water, which can run off later into the system. Now, factor in climate change, or if you don’t like the idea of climate change, just call it drought. When temperatures in the Sierras get much above 30 degrees, we don’t get snow. We get rain, and rain doesn’t get stored.

Let’s put the pieces together. The three big water sources for Angelenos are the Owens Valley (DWP), the Colorado River Aqueduct, and the California Aqueduct (MWD), plus a variable amount of local water through our water basins and recycling.

Over time, it is clear that the amount of available water from the Colorado River and the Owens Valley will decrease, not increase. Guess what that leaves? That’s right, the California Aqueduct, which produces a large but extremely intermittent flow of water. Thus, the Delta tunnel project.

The project will help the environment (the 100,000 pages of CEQA documents), and the project will provide more water storage as well. Maybe that could have helped avoid this week’s flooding up north.

Absent something like the Delta tunnel project, it is not likely that the amount of water available to pump from the California Aqueduct will increase anytime soon. And while MWD contracts for up to two million acre/ft. per year, with regulatory/environmental requirements, the actual amount received is more like 50% of that figure -- which could go down.

While a $15 to $17 billion plus bill to build the tunnels sounds like a lot of money, consider the B Plan: not having enough water to support us. Remember, without the Owens Valley Aqueduct (politically correct name, the Los Angeles Aqueduct), there wouldn’t be much of a Los Angeles.

And I would remind folks that big capital projects take a lot of time to complete. Just look at our freeways and CalTrans attempts to fix/build them when bad stuff happens. I think a few bucks a month for ratepayers represents a sound investment. Heck, maybe someday we can even water what used to be our lawns.