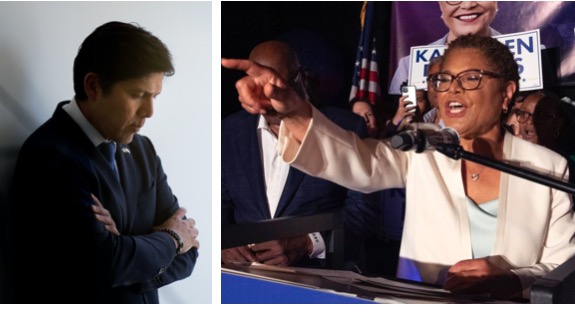 While many Angelenos have their own ideas of what she needs to do in her first one hundred days, none more important than ousting Kevin de Leon from the Los Angeles City Council.

Bass does not have the authority to remove Kevin de Leon from office.  But she does have the bully pulpit where she can demand Kevin de Leon’s resignation.

She also has a well-funded political organization that she can mobilize to work with the underfunded stakeholders of Council District 14 to gather the necessary 21,000 signatures to place the recall on the ballot and to manage a campaign to assure that the voters of CD 14 approve the recall.

Karen Bass also needs to call on the officials of the Democratic Party to endorse the recall of Kevin de Leon. The Democrats need to put their money and efforts where their mouths are.  Otherwise, the Democrats are hypocrites, implicitly supporting the racist remarks of Nury Martinez.

Karen Bass also needs to demand that the Los Angeles County Federation of Labor and its new President, Yvonne Wheeler, use its best efforts to aid in the recall of Kevin de Leon.

Bouncing Kevin de Leon is important to the residents of Council District 14.  Today, they are not being properly represented by the wounded Kevin de Leon because the Councilmembers have refused to have anything to do with him because of the secret meeting where he did not call out Nury Martinez and her racially insensitive remarks.

This is an easy lift for our new mayor and will enhance her credibility with all Angelenos.   Is she up to the task?