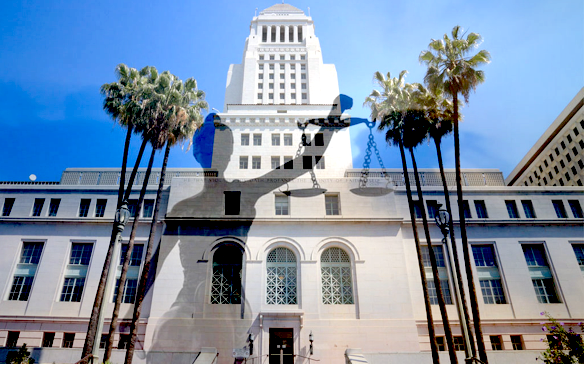 Former Councilmember Jose Huizar has been indicted for corruption and is scheduled to go on trial on May 24 along with former Deputy Mayor Ray Chan. Four other bagmen have pleaded guilty to a variety of charges and are cooperating with the FBI.  Former Councilman Mitch Englander just finished a prison sentence.  Councilman Mark Ridley-Thomas has been indicted on federal corruption charges.

Today, January 10, former city attorney Tom Peters who was in charge of the civil litigation branch of the City Attorney’s office agreed to plead guilty to one count of aiding and abetting extortion.

More indictments are expected as the FBI is continuing its criminal investigations into corruption at City Hall, the City Attorney’s office, and the Department of Water and Power.

What has been the reaction of the City Council and Mayor Eric Garcetti?  They were “shocked, shocked” to find out there is corruption in the City of Los Angeles.

The City’s highly publicized corruption is a national embarrassment and has destroyed what little trust we have in City Hall, especially since the Nury Martinez led City Council has done zero to clean up its act.

We have three suggestions, all of which have been proposed previously by members of the City Council.

This would eliminate the ability of the City Council to approve a project like Sea Breeze, the $72 million residential development in Harbor City that was turned down by the Planning Commission, but approved by the City Council thanks to over $600,000 in campaign contributions to our politicians, including $205,000 to Superintendent Janice Hahn.

The second suggestion is to create “an independent auditors investigators office (Office of Anti-Corruption and Transparency), focused on land use, development and construction in the City of Los Angeles, tasked with identifying and preventing fraud, corruption, and misconduct, and with the authority to conduct investigations of all government entities, the ability to issue subpoenas, examine all city documents, contracts, and monetary expenditures, compel testimony from City employees and elected officials, and recommend administrative discipline and policy improvements.”

As of today, these two motions that were proposed in May of 2020 by Councilmen Ryu and Koretz have not seen the light of day.

The third suggestion is for “a ballot measure for the November 2022 ballot to amend the City Charter to create an Independent Redistricting Commission for the City of Los Angeles.”

This motion may have some legs since it was seconded by City Council President Nury Martinez.