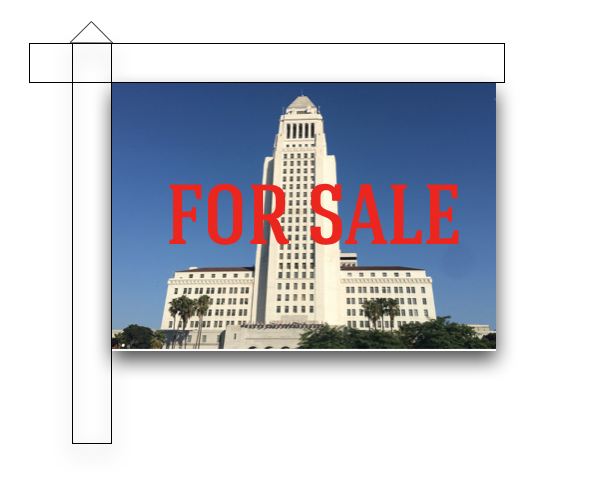 Suspended Councilman Mark Ridley-Thomas has been indicted on federal corruption charges. And the United States Attorney’s Office and the FBI are continuing to investigate additional corruption at Los Angeles City Hall.

Despite this corruption, the City Council refuses to enact meaningful campaign finance reform, allowing real estate developers to contribute peanuts to our politicians in return for favors that result in millions of additional profits.  A prime example is the Millennium Hollywood that is pushing ahead with a massive development despite being located on an active earthquake fault.

Public sector labor unions have also managed to buy the City Council. In October of 2019, the City Council approved budget busting labor agreements, knowing damn well that these deals would blow a $1.5 billion hole in the City’s budget over the following four years.

Former Mayor Antonio Villaraigosa had never spoken truer words when he was interviewed on Conan Nolan’s NBC 4 News Conference: “I have lived here my entire life. I have never seen this city so dirty, so rudderless.  Homeless everywhere, crime going up, and there just seems to a be a lack of urgency, a lack of any kind of all-hands-on-deck approach to these crises.” And he was being nice.

And now Councilwoman Nury Martinez who leads the rudderless City Council wants to form an Ad Hoc Redistricting Committee to redraw the redistricting map that was prepared over the last year by the Redistricting Commission. During this time, the 21 person Commission, headed by Fred Ali, a well-respected member leader of the City’s philanthropic community who was appointed by Martinez, conducted numerous virtual meetings throughout the City, where 15,000 Angelenos offered testimony and input.

As a result, the Commission developed an excellent set of core values and operating principles and created a redistricting map that eliminated decades of gerrymandering and resulted in fair representation for all Angelenos.

While the City Council’s redrawing of the restricting map is uncertain, one thing that is certain is that if our corrupt City Council develops self-serving redistricting map that deviates substantially from the map developed by the Redistricting Commission, it will only add to our lack of confidence and trust in City Hall.

In 2022, the following six members of the City Council will up for reelection: Cedillo, Blumenfield, Rodriquez, Price, Bonin, and O’Farrell.  Koretz will be running for City Controller. Do they deserve our votes?