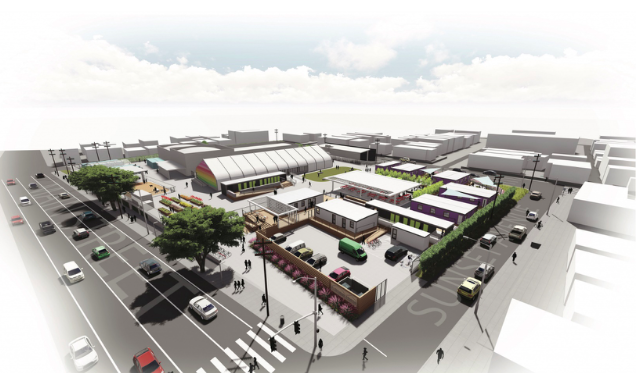 LA WATCHDOG-The former Durant Library has been repurposed into the Gardner Street Women’s Bridge Housing Center, a 30-bed facility that will provide temporary housing for homeless women in Hollywood.

These women will also benefit from wrap around services, including case management, mental health care, and substance abuse treatment. In addition, the staff will also work with the women to find permanent housing.

This attractively restored Midcentury Modern building, built in 1958 and located on the northwest corner of Gardner and De Longpre in Hollywood, one block south of Sunset Boulevard, opened on Monday, September 16.  It has 30 beds in the former reading room, bathrooms and showers, a kitchen, dining area, a common area with couches and books, a courtyard, and a garden.

While Gardner Street Center will provide valuable services to homeless women in Hollywood, the cost of $3.5 million to restore this 4,000 square foot, 30 bed facility does not pass the smell test.

[The source of this cash is from the proceeds of bonds issued pursuant to Measure HHH that was approved by City voters in November of 2016.]

This represents a cost of $875 per square foot, a level that is on a par with some of the priciest residential real estate in Hollywood.

The cost for each of the 30 dormitory style beds is almost $120,000, an unbelievable amount that exceeds the cost of beds in permanent supportive housing apartments.

When you include the estimated value of the land ($1 million*), the per square foot value increases to $1,125 (hello Beverly Hills) while the value per bed is a mind blowing $150,000.

The $3.5 million cost of restoration of the Center is excessive, begging the question of why City work crews who restored the Center are so inefficient and expensive.

*The 17,000 square foot corner lot was appraised at $2.2 million in 2004 when the property was transferred to Bureau of Sanitation from the Library Department.  However, the property is now encumbered by an odor control facility for two underground sewer lines. The estimated value for the property is a conservative $1 million. It does assume any appreciation since 2004.

**The operating expenses of the Center are estimated to be at least $1 million a year, or $33,333 per bed.  This includes a $657,000 management and service contract with the Weingart Center, a respected non-profit operator of homeless housing and provider of related services.  This contract, based on a cost of $60 a day for each bed, will be paid for by the County from the proceeds of the Measure H sales tax that was approved by the voters in 2017.

The remaining portion of annual cost, an estimated $400,000 a year, is the responsibility of the City. It includes principal and interest on the Measure HHH bonds and the maintenance of the building and the landscape by City employees.