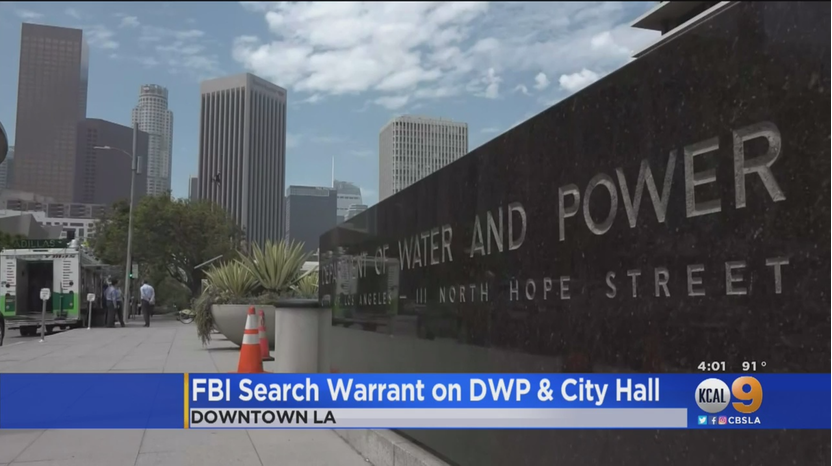 LA WATCHDOG--Our Department of Water and Power has been front and center ever since the FBI raided its offices and those of City Attorney Mike Feuer looking for evidence of “bribery, kickbacks, extortion, mail fraud, and money laundering” in connection with the fraudulent settlement of the class action lawsuit involving the botched rollout the Department’s customer billing system.

The Board of Commissioners also appointed Marty Adams, the Chief Operating Officer, as the General Manager and Chief Engineer.  Adams, a 35-year DWP employee, is the first internally promoted GM in decades and has as an excellent reputation for openness and transparency and for his collaborative management style.

On Friday, LA based attorney Brain Kabateck, the new counsel for the class action lawsuit, filed his Preliminary Report Regarding Status of Class Action Settlement (90 days post appointment) with the Los Angeles County Superior Court (Judge Elihu M. Berle).  This report detailed the shenanigans behind the fraudulent settlement of the class action lawsuit.

First and foremost, City Attorney Mike Feuer should resign from office since the fraudulent settlement occurred on his watch.  And if he does not have the decency to resign, he should recuse himself.

Second, the City should reimburse the Department and the Ratepayers for any expense incurred as a result of the actions of the City Attorney.

As for the class action lawsuit, the $67 million fraudulent settlement should be “tossed’ by the judge.

The Department, the City, and Katabeck should also work together to make sure all legitimate claims are honored.  By working together, the Department and Ratepayers will save considerable time and money and avoid expensive litigation.

In his report, Katabeck claims that there is at least another $50 million owed to Ratepayers. This is addition to the $67 million settlement.  While this may be true, the Ratepayers, are the “deep pocket” and will be footing the bill for these extra payments.

The Department and the City must also recoup the $15 million paid to the previous class action counsel, Cleveland based Jack Landskroner, and other culprits, including Paul Paradis, the New Jersey attorney retained by our own City Attorney.  DWP should also ask for damages and expenses, including legal fees.

As a matter of interest, Landskroner, Paradis, and Wright pleaded the Fifth when questioned in depositions.

The Department, the City Attorney’s office, and the Superior Court judge need to monitor the expenses of the Katabeck firm on a timely basis and limit any contingency fees, similar to those paid to Landskroner.

As for the litigation against Pricewaterhouse Coopers (“PwC”), the systems consultant to DWP on the customer billing system, the Department should attempt to settle this matter based on the terms of the consulting contract, first by determining the role played by PwC and its culpability while recognizing that DWP was not blameless.  It will also be interesting to see how City Hall pressured DWP to go live when the system was not ready for prime time.

To date, PwC’s lawyers have done an excellent job of deflecting blame by undercovering the fraudulent class action settlement.

And then there is the role of Paul Paradis, the NJ based attorney that was mentioned 62 times in Kabateck’s 31-page report.  Paradis and his role need to be thoroughly investigated.

Paradis was up to his eyeballs in the class action lawsuit.

He convinced the City and DWP to file a lawsuit against PwC alleging fraud, hoping to collect triple damages.  Paradis’ angle: he would be entitled to 20% of the ultimate settlement.

Finally, Aventador Utility Services, a company controlled by Paradis, was awarded a $30 million no bid contract by DWP to “provide project management services related to the remediation” of the customer billing system even though he had no relevant experience.

It will take time to sort through the class action lawsuit, the PwC litigation, and the role of Paul Paradis.  But more importantly, there is also a utility to run, one that is undergoing significant changes involving tens of billions of dollars.  DWP needs to focus on managing the technically challenging transition to clean energy and recycled water while keeping the lights on and the water running.