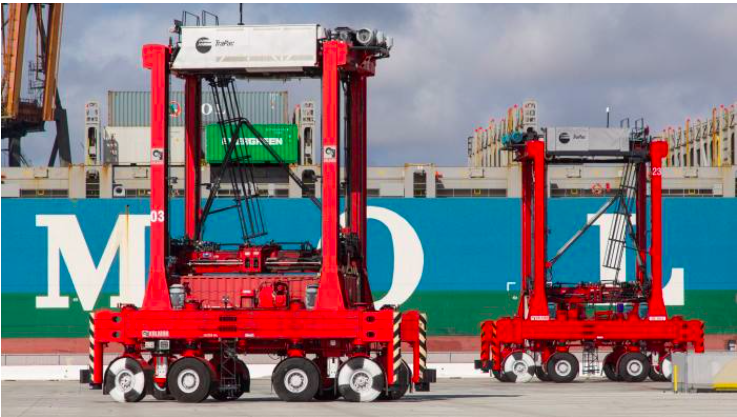 LA WATCHDOG--On Friday, June 28, the Los Angeles City Council will consider a motion by Councilman Joe Buscaino to assert jurisdiction over a decision by the Board of Harbor Commissioners to approve a minor construction permit that would allow Maersk, the world’s largest shipper of cargo containers, and its subsidiary, APM Terminals, to install electric charging stations, wi-fi antenna poles, and traffic barriers in its 484 acre facility.

This construction permit is just a small part of Maersk’s ambitious plan to introduce up to 130 driverless electric powered cargo handlers that will increase the efficiency of its container operations.  This capital-intensive project will also reduce emissions consistent with Mayor Eric Garcetti’s New Green Deal.

Unfortunately, the politically powerful International Longshore and Warehouse Union is opposed Maersk’s plan because it believes that it will result in the loss of an estimated 500 jobs.  As a result, they have enlisted the help of Garcetti, Buscaino who represents San Pedro, County Supervisor Janice Hahn, a resident of San Pedro, and the Democratic Party to oppose this minor construction permit in an effort to stall or derail Maersk’s project.

But this is dispute involves more than the Port, well-paying union jobs, increased productivity and efficiency, and clean energy.

The Port of Los Angeles is fighting to maintain its declining market share because the widening of the Panama Canal allows very large container ships to access more efficient ports on the East and Gulf Coasts.  We are also experiencing increased competition from other West Coast ports, including those in Canada and Mexico who, like the East and Gulf Coast ports, are aggressively pursuing manufacturers, shippers, and retailers with promises of lower costs, greater efficiencies, and improved logistics.

At the same time, the Pacific Maritime Association, the organization that represents the industry, reported that our container charges are 90% to 160% higher than competing ports. But the new driverless electric powered cargo handlers will increase efficiency and lower costs because the turnaround time for the trucks entering the Maersk terminal will go from 105 minutes to 35 minutes.  Furthermore, these driverless electric cargo handlers will operate 24 hours a day, not 16 hours if the equipment were operated by union members.

Maintaining or increasing market share of the Ports of Los Angeles and Long Beach is important for Southern California because the ports account for over 30% of the $1 trillion gross product of the greater Los Angeles metropolitan area.  Directly and indirectly, more than 179,000 jobs are dependent on the port complex.

Mayor Garcetti has been involved in the labor negotiations, but has not made any progress.  More than likely, he is trying to saddle Maersk with additional costs, but to no avail because the “savings” from this capital-intensive project will go to finance his environmental initiatives.

[This situation is reminiscent of Garcetti’s participation in the LAUSD strike where the solution involved a “Leap of Faith” financing (other people’s money), an alternative that was rejected by a majority of the voters who voted NO on Measure EE, LAUSD’s $500 million parcel tax.]

Maersk has also indicated that its union contract and its agreement with the Port allows the terminal to proceed with this project even if this minor construction permit is not approved.

If the City Council overrides the decision of the Garcetti appointed Harbor Commissioners, it will send a loud and clear message that Los Angeles is unfriendly to business and employers and that it is willing to sell out the larger community to appease the local concerns of its politically power unions.

Mayor Eric Garcetti and the Herb Wesson led City Council need to reject Buscaino’s motion to overturn the decision by Board of Harbor Commissioners and allow Maersk to proceed with its plan to introduce driverless electric cargo handlers that will result in productivity gains and environmental benefits.

MOTION (BUSCAINO - PRICE for WESSON - ET. AL) relative to asserting jurisdiction over the Board of Harbor Commissioners action on June 20, 2019, regarding denying an appeal on Coastal Development Permit No. 18-25, thereby authorizing the installation of landside infrastructure necessary to operate automated, driverless trucks at APM Terminals on Pier 400 at the Port of Los Angeles.

ASSERT jurisdiction, pursuant to Charter Section 245, over the Board of Harbor Commissioners action on June 20, 2019, relative to denying an appeal on Coastal Development Permit No. 18-25.