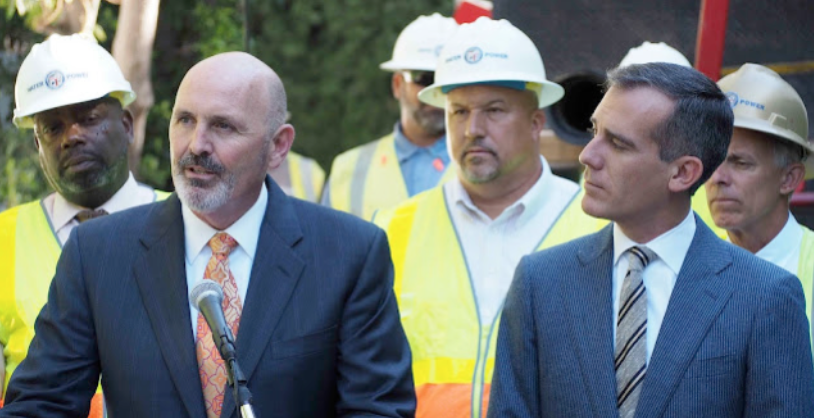 LA WATCHDOG--On Friday, Mayor Eric Garcetti announced the that Marty Adams will replace David Wright as the General Manager of our Department of Water and Power on October 1.

No reasons were given as to why Wright was shown the door after his three-year stint. (Photo above: DWP GM David Wright, left. with Mayor Eric Garcetti.)

More than likely, there is a back story.  Wright appeared to be doing a decent job.  The Department was making progress in repairing and modernizing its infrastructure and in meeting its environmental goals.  He was also awarded a merit bonus in 2018 by DWP’s Board of Commissioners which was approved by the City Council and Mayor.

However, Dakota Smith of the Los Angeles Times indicated that Wright was sacrificed in connection with the settlement of a class action lawsuit involving the botched rollout of the $162 million customer billing system in September 2013.  This highly publicized screw up resulted in huge overbillings of Ratepayers, causing massive anxieties throughout the City when budget busting bills arrived in our mailboxes. And compounding the problem was the DWP (lack of) customer service department.

In January 2015, a class action lawsuit was filed against the Department. But it was quickly settled by August 2015, raising the eyebrows of people familiar with class action litigation.

In March 2015, the City launched a lawsuit against Price Waterhouse Coopers (PwC), the firm charged with implementing the new customer billing system.  This was out of character because the usual practice of the City and DWP was (and is) to settle disputes out of court.  But with the prospect of triple damages, City Attorney Feuer allowed this lawsuit to proceed, egged on by the City’s outside contingency lawyers who were envisioning a huge payday equal to about 25% to 30% of the settlement.

But PwC and its lawyers, as expected, did not cave, but launched a robust defense.  As a result, they uncovered a scheme where the settlement of the class action lawsuit was a prearranged deal between the City Attorney and the hand-picked plaintiff’s lawyer, Cleveland based Jack Landskroner.  The defense lawyers also unearthed a questionable $30 million contract between the Department and New Jersey based Paul Paradis, one of the DWP’s outside lawyers, to oversee the settlement.

As a result, the judge has appointed a former federal prosecutor to investigate the 2015 settlement of the class action lawsuit and the payments to the lawyers on both sides of the settlement.  This will be very interesting as Paradis and Landskroner have refused to answer any questions, pleading the Fifth Amendment.

While Wright may have a degree of culpability, the blame for this mess belongs to our City Attorney, Mike Feuer, the man who made the decision to rig the settlement of the class action lawsuit and to go after PwC despite a consultant’s report that indicated that the botched rollout was the result of DWP’s poor management and preparation.

There is no doubt more to the story as to why Wright is leaving.  There is speculation that Wright was not comfortable with the efforts by Mayor Garcetti and his office to cover up the cost of the Mayor’s ambitious sustainability plans and their impact on Ratepayers. This includes the Power System being fossil free by 2045 and the recycling of the City’s wastewater into almost 200,000 acre feet of potable water a year by 2035.

As for Marty Adams, the Department’s Chief Operating Officer, he has developed very good relationships with Ratepayers and other DWP stakeholders.  He has been open and transparent and willing to meet with the public and answer any and all questions.  Now whether the Mayor and his team will allow the Department to fess up to the cost of the Mayor’s New Green Deal and the impact on Ratepayers is a question that needs to be answered sooner rather than later.

More than likely, we will be drowned and zapped by our water and power bills, respectively.