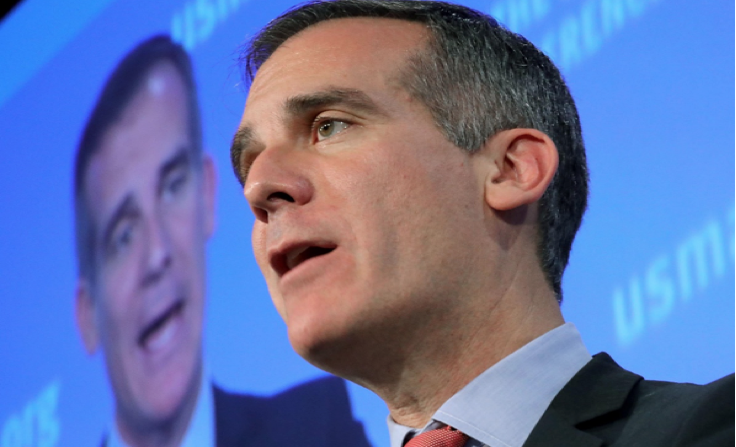 On Monday morning at ten, Mayor Eric Garcetti will deliver his State of the City address to an invitation only audience gathered in the Council Chambers at City Hall.  As a follow up, on Friday, April 20, Garcetti will submit his “balanced” budget for the fiscal year beginning July 1, 2018 to the City Council for its review, analysis, and approval.

While the politically ambitious Garcetti will no doubt list a long string of accomplishments during his tenure as mayor, we need to remember that he has been blessed by a booming economy, where City revenues have increased by over 30% during his tenure.

Garcetti will also tell us how he intends to own and attack the many challenges facing the City, including homelessness and affordable housing at the top of the list.

As for the budget, he will tell us that the he and the City Council have done an extraordinary job of “balancing” the budget by closing a projected budget deficit of $250 million for the upcoming fiscal year.  While a portion of this deficit was covered by increased revenues, the City once again will resort to cutting services and to sleight of hand maneuvers where money is diverted from its intended purposes.

But more than likely, Garcetti will duck the details about how runaway personnel costs blew a massive hole in the budget as they soared by $350 million on account of insidious step increases, higher pension contributions, generous raises for the police and civilian workers, ballooning costs for medical, dental, and other benefits, and the hiring of new employees to the City’s already bloated and poorly managed civilian work force.

Garcetti will give lip service to financial responsibility.  But the fact remains that he has ducked on delivering on his Back to Basics promise to have the City “Live Within Its Financial Means.”

Despite a $1.4 billion increase in revenues since Garcetti became Mayor, he is ducking the problem of the City’s Structural Deficit, where expenditures increase faster than revenues.  This results in a river of red ink for years to come because the City is unwilling to say no to the campaign funding leaders of the public sector unions who always want more.

Nor has Garcetti addressed the City’s bloated and poorly managed work force, refusing to benchmark the efficiency (or lack thereof) of the City’s far flung operations as recommended by the Neighborhood Council Budget Advocates.

Nor has Garcetti made any attempt to implement the recommendations of the LA 2020 Committee and the Neighborhood Council Budget Advocates to establish an Office of Transparency and Accountability to oversee the City’s perilous finances and to engage in multiyear budgeting.

Over the years, the requirement to “balance” the budget has resulted in a Service Insolvency, where money that should have been spent on our streets, infrastructure, and public safety has been diverted to balancing the budget and paying for increased salaries, benefits, and pension contributions.

Despite a deferred maintenance backlog that has been estimated to exceed $10 billion, Garcetti has ducked the problem by not developing a plan to attack our failed streets and the rest of our deteriorating infrastructure.

Once again, he has ducked the recommendations of the LA 2020 Committee and the Neighborhood Council Budget Advocates to establish a Committee on Retirement Security to review and analyze the City’s two pension plans and report its finding to the public.

Garcetti will tout that the City has built an adequate rainy day fund of $400 to $450 million.  While these reserves are an improvement from the Villaraigosa years, it is still underfunded by at least $200 million according to City Administrative Officer and $600 million short based on the guidelines of the Government Finance Officers Association.  And since there is cash floating around, the City has often raided these reserves to fund every day expenses.

By ducking the issues surrounding the Structural Deficit, the deferred maintenance backlog of more than $10 billion, the unfunded pension liability of $15 billion, and the inadequacy of the Reserve Funds, Garcetti is condoning Intergenerational Theft where we are dumping tens of billions of past sins on the next two or three generations of Angelenos.