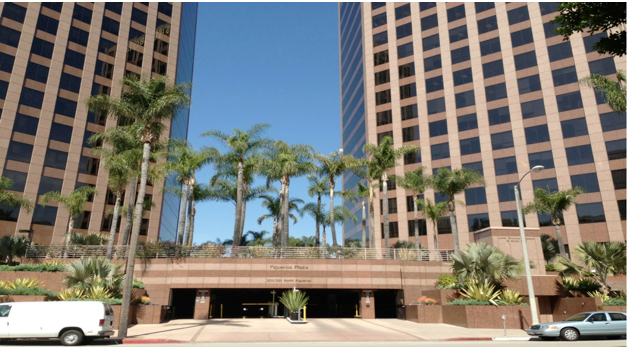 LA WATCHDOG--At its meeting on Tuesday, the Garcetti appointed Board of Commissioners of our Department of Water and Power will consider the adoption of a ten year, $63 million lease for 124,350 square feet of office space in Figueroa Plaza, a City owned office complex located at 201-221 North Figueroa Street in DTLA.

This 25 year old property, purchased by the City in 2007 for $219 million, consists of two 16 story towers comprising 615,000 of office space and is located north of the Central Business District and about a quarter of a mile west of DWP’s headquarters on North Hope Street.

But this less than arms-length negotiated (some say dictated) lease will cost DWP and its Ratepayers an estimated $20 million more than is warranted by current market conditions according to people familiar with the downtown office market.  And this is nothing but a sleazy, underhanded, less than transparent attempt to stick Ratepayers with the tenant improvements that are the responsibility of the landlord, the City of Los Angeles.

DWP claims that it needs the additional office space to house 550 employees which are part its overall plan to improve customer service and to ramp up its ability to make the necessary investments in its infrastructure.  This extra space will alleviate the pressure on DWP’s historic 1.6 million square foot headquarters and allow the Department to facilitate its succession planning and the transfer of institutional knowledge as a disproportionate number of employees will be eligible for retirement over the next five years.  And leasing space in nearby Figueroa Plaza will result in greater efficiencies and increased savings.

But these efficiencies do not justify paying an extra $20 million in tenant improvements and above market rent.

The proposed $63 million lease can be broken down into three components: rent, parking, and tenant improvements.

Under the proposed lease agreement, DWP will pay $2.48 per square foot, which amount will escalate by 3% a year.  This will require an initial annual rent payment of $3.7 million, increasing to over $4.8 million at the end of the lease. Total rent payments will be $42.4 million.

The DWP will also have the right to lease up to 310 parking spaces at an initial monthly rate of $145, again escalating at 3% per year.   The initial annual payment is expected to be $540,000. Total parking fees over the 10 years are projected to be more than $6.2 million.

Finally, the City is slamming DWP for $14.5 million for tenant improvements, most of which will be paid up front.

But according to downtown sources, the rent should be at least 10% lower and the annual increase lower than 3%.  Underlying this opinion is that Figueroa Plaza is cut off from the Central Business District, lacks the amenities of a first class, professional building, and has not been properly maintained.

This lower rate would save the Department in the neighborhood of $5 million over the life of the lease.

Even with this discount, DWP’s rent would be higher than the rent paid by the previous tenant, the national law firm of Lewis, Brisbois, Bisgaard, & Smith, which was forced to relocate to a more prestigious downtown location as a result of the City’s failure to repair the extensive damage caused by the Da Vinci apartment multi alarm fire in December of 2014.

According to same downtown sources, the tenant improvements of $14.5 million are the responsibility of the landlord, the City of Los Angeles.

While the City is crying poor mouth, DWP and its Ratepayers are not responsible for the City’s obligations, especially given that the Ratepayers have already forked $650 million this year to the City through the City Utility Tax and the 8% Transfer Tax.

Rather than proceeding, the politically appointed Board of Commissioners must demand an independent opinion on the terms of the lease which, in the name of openness and transparency, would be shared with the public along with all the backup material.

This attempt to rip off the Ratepayers is just another example why we cannot trust Mayor Garcetti, his office, and the City Council to represent the best interests of the Ratepayers and the Department, demonstrating the need for greater transparency in the relationship between the Department and City Hall.

And this stunt is just another hit to the reputation of our elected officials, at a time when they will be blowing smoke in our face, asking us to approve massive increases in our taxes.  Good luck.