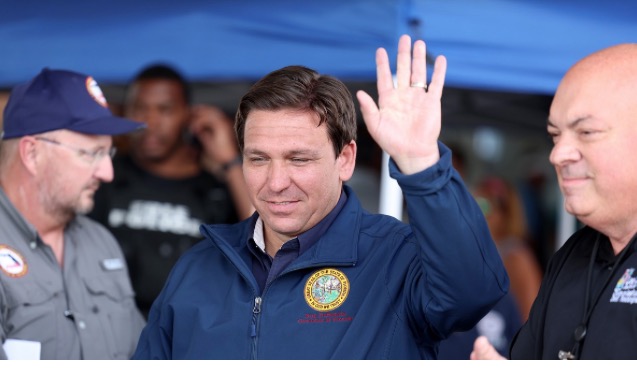 GUEST COMMENTARY - We're all in this thing together.

Or so we like to say. But Ron DeSantis' hypocrisy just punched a hole through that ideal.

In 2013, when Hurricane Sandy devastated New Jersey, the then-Florida congressman piously declined to support a bill providing $9.7 billion in aid to those who had seen their homes damaged or destroyed. "I sympathize with the victims of Hurricane Sandy," he declared, but added that it would not be "fiscally responsible" to increase the debt without a decrease in spending.

Thankfully, the bill passed without his—or 67 other House Republicans'—support. Otherwise, all those people wiped out by a freak storm would have had to try paying their bills with DeSantis' sympathy.

Now, nine years later, here he comes as Florida's governor, asking Joe Biden—a president he has ridiculed tastelessly and repeatedly, no less—to provide disaster relief for his state, which was swamped last week by Hurricane Ian. Suddenly, he is singing a very different tune, telling Fox "News" that, "When people are fighting for their lives, when their whole livelihood is at stake, when they've lost everything—if you can't put politics aside for that, then you're just not going to be able to."

One suspects any New Jerseyan who stood in the rubble of his life nine years ago listening to this guy tell him to go fly a kite will have a pungent response to that sanctimonious load of bovine egesta. But DeSantis is not just a hypocrite, he's also a kind of secessionist, albeit one of convenience.

That word is used not in the sense of a legal breaking away but, rather, in the sense of an emotional and spiritual one, a pulling away from the whole, such that one can be untroubled by ruin that falls on one's putative countrymen so long as one's immediate environs are unscathed. But again, DeSantis is a secessionist of convenience: He scorned federal aid until he needed federal aid. With his own state largely underwater, this most political of creatures suddenly discovers a need to "put politics aside."

President Biden is fond of reminding us, though with an increasing edge of pleading to his voice, that, "We are the United States of America." So that what threatens any of us ought to concern all of us. To be sure, Americans remain a people of heroic generosity, willing to travel long miles, work long hours, contribute large amounts to help brothers and sisters in need.

But DeSantis' hypocrisy, his secession of convenience from the ideal of the larger us, suggests a different model of Americanism, one which, while it has yet to take broad hold, seems ominously consonant with our divided, schism-ridden politics and, more to the point, with the transactional, what's-in-it-for-me ethos popularized by his former political patron. Meaning the guy who initially stiffed California and Puerto Rico when they needed disaster relief, the guy who, according to "This Will Not Pass," a book by Jonathan Martin and Alexander Burns of The New York Times, required states to "ask me nicely" for help.

Make no mistake: Florida should receive from the federal government every dime it needs to rebuild. That's what family does for family: It sacrifices. Yet one wonders whether a secessionist of convenience will remember that once the waters recede and rebuilding begins. And one doubts.

It is nice to believe we're all in this thing together. But some of us don't hold with that. They'll call you when they need you.

Till then, you're all in this thing by yourselves.

(Leonard Pitts Jr. won the Pulitzer Prize for commentary in 2004. His latest book is The Last Thing You Surrender: A Novel of World War II. His column runs every Sunday and Wednesday in the Miami Herald. Forward From This Moment, a collection of his columns, was published in 2009. This article was first published in CommonDreams.org.)