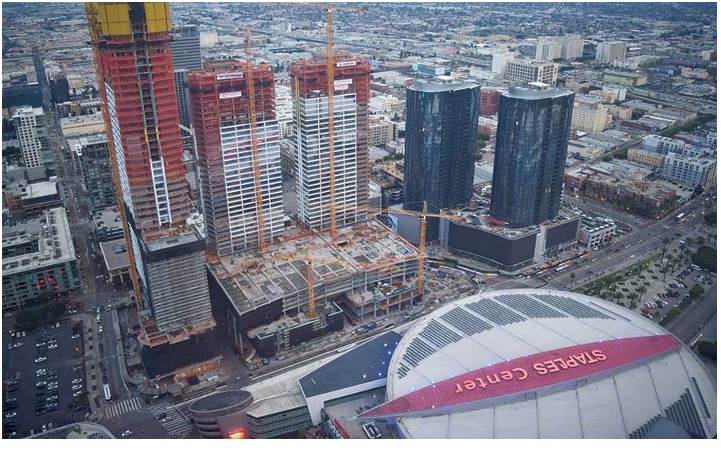 ACCORDING TO LIZ - Abandoned high-rises and homeless encampments on the streets of downtown are not selling Los Angeles as the best Olympic venue for 2028 Olympics.

Los Angeles is a city wracked by the tension between developer demands and the need for affordable housing. Pretty much anyone with even a cursory involvement in the City’s politics knows this. However, there are even darker clouds on the horizon.

Hong Kong-based real estate giant China Evergrande Group has been called the “Lehman Brothers of China” after the American investment bank and global financial services firm that was once perceived as being too big to fail. With over $300 billion in liabilities, Evergrande is now floundering from crisis to crisis and may collapse even further, rolling out economic devastation in a domino effect around the Pacific rim.

Now in receivership, Evergrande is being offered pennies on the dollar for some of its significant assets as it struggles to reinstate itself in an increasingly treacherous financial world.

Evergrande’s toll on the Chinese real estate industry has shaken the foundations not only of China’s fiscal liquidity but is also of its Belt and Road Initiative projects key to expanding its sphere of influence outside of Asia.

Mainland China has been infecting U.S. real estate for some time. Almost a quarter of a TRILLION dollars has poured out of China and into the international economy in the past decade alone. But it comes at a cost.

It has partners in crime: the cities and countries that had hoped to attract more millions of yuan with major tax breaks and incentives paid from taxpayer dollars. They are now scrambling to find replacement financing or let partially constructed big-bucks developments sit as abandoned eyesores on downtown skylines.

Construction of the triple towers of the Oceanwide Plaza in downtown Los Angeles effectively shut down five years ago and the property looms derelict over the Convention Center.

Oceanwide originated in the late 1980s as a construction company in Shenzhen, an economic region just north of Hong Kong, but it rapidly expanded into an international conglomerate, digging its tentacles into banking and insurance, energy, technology and multimedia with vast sums invested in everything from property acquisition to movie production.

China’s domestic real estate crisis in recent months, compounded by internal corruption, Covid, and human rights conflicts, has aggravated the impact the overextended and already-troubled Oceanwide Holdings has had on construction projects in Los Angeles, New York and San Francisco.

Even before the pandemic, work had stalled on three new apartment towers and a luxury hotel adjacent to the Crypto.com Arena (more commonly known as the Staples Center).

Speculation has driven up Los Angeles real estate prices over the past couple of years but with the skittish real estate market and increasing inflationary pressures from a myriad of sources around the world, property prices are due for a drop.

But in such an economy, with investors overreacting to the turbulent financial markets and escalating interest rates, dollars tend to dry up or target fire-sale purchases creating their own negative fiscal down-spirals.

And without the gold ring of soaring prices to tempt them, the construction industry is in jeopardy. And with it, the rest of California’s economy.

No matter how much the minimum or living wage is increased, if there is no work, carpenters and plumbers don’t get paid. If the crafts don’t have work, can’t pay their own rent or mortgages, can’t buy goods or pay the doctor, all those other industries and services that depend on their paychecks will also suffer.

Communist China has had all the hallmarks of Los Angeles City Hall, rife with corruption, cooked books and personal profiteering. Other Sino-affiliated developers – Fantasia Holdings, Central China Real Estate, Greenland Holdings and the Kaisa Group – are suffering along with Evergrande.

The Chinese government will almost certainly focus on its own economic resuscitation leaving London, Sydney, New York… and Los Angeles to fend for themselves.

Here, none of Oceanwide’s projects paid their property taxes for 2021 and the question is – especially after racking up interest and late penalties for a few years, will these ever be paid?

And what does that mean for our City’s General Fund and the future of Los Angeles?

(Liz Amsden is a regular contributor to CityWatch and an activist from Northeast Los Angeles with opinions on much of what goes on in our lives. She has written extensively on the City's budget and services as well as her many other interests and passions. In her real life she works on budgets for film and television where fiction can rarely be as strange as the truth of living in today's world.)