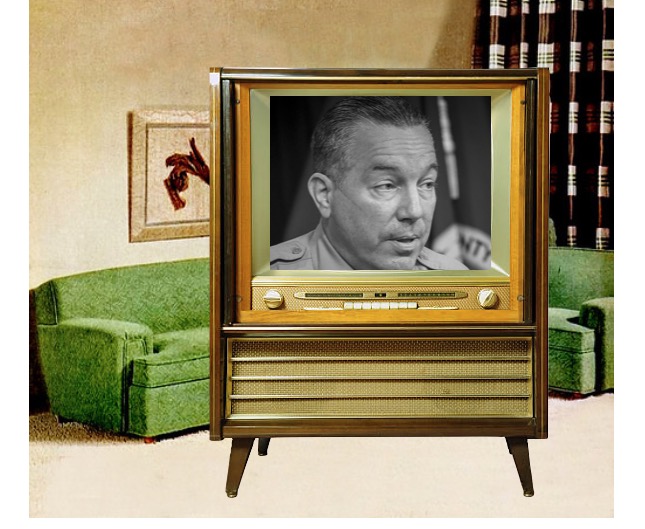 THE VIEW FROM HERE - During the debate on September 21, 2022, Sheriff Alex Villanueva showed that he is out of step with Los Angeles.

He actually believes in that old motto, Truth, Justice, and the American Way.  The American way, at least in the 1950's as portrayed in Superman comics and the TV show, meant the rule of law rather than allowing crooks to run amuck.  Back then, that was an ethos in which we all believed.

As we saw during the debate, the role of sheriff is now to collaborate with white collar criminals.  Sheriff Villanueva had the audacity to obtain properly drafted subpoenas and to serve them according to the legal procedure on two of Los Angeles “made men,” or to be more politically correct, on two of Los Angeles “made persons:” Sheila Kuehl, a member of the County Board of Supervisors and Patricia "Patti" Giggans, a member of L.A. County Civilian Oversight Committee.

Under the rules how Los Angeles currently operates, the only time a search warrant may be used is when some politico is interfering with corrupt enterprise which runs Los Angeles.  Who is not aware of the FBI raid on Councilmember Jose Huizar’s office and home in November 2018?  CM Huizar had the nerve to mess with the smooth operation of the Garcetti machine’s Vote Trading System by exacting extra bribes from developers for councilmembers in districts where a project was not planned.  As explained twenty gazillion times in CityWatch, in Los Angeles each councilmember is required to vote Yes on each and every project which another councilmember places on the city council agenda.  The beauty of this system is that a developer need bribe only one councilmember and make a contribution to Garcetti’s Mayor’ charity fund to have an illegal project unanimously approved.  For unknown reasons, Rick Caruso’s giving $125,000.00  to Garcetti’s charity fund is not a bribe.  In the Huizar case, the FBI has carefully avoided mention of the multi-billion dollar Vote Trading System, which Penal Code, § 86 criminalized.  Los Angeles has a superseding law for white collar crime in government, i.e. “see no evil, hear no evil, speak no evil.”

Back to Naive Sheriff Alex Villanueva

His lawfully seeking a subpoena was so outlandish that Ms. Kuehl was given advance warning of the subpoena and when it was going to be served.  As Ms. Kuehl was heard stating during the raid, "I had been texted last night by county counsel that there was a planned search of my house, maybe as early as 7 a.m."  September 23, 2022, KABC Eyewitness News, Court Documents Reveal Who May Have Told Supervisor Sheila Kuehl about LASD Raid, by Josh Haskell

Under the new rules for Los Angeles, tipping off someone about a subpoena in time for the person to destroy the records is praise-worthy behavior, especially when the warning comes from Acting County Counsel Dawyn Harrison.  In yesteryear, informing the target of the subpoena was considered obstruction of justice, but that rule is defunct. The new rule is that whoever is in charge makes up the rules which best protect the criminals.

Under yesteryear’s California Penal Code, §135, an individual must not destroy, erase, or conceal this evidence, or they could be accused of violating this statute, e.g. deleting incriminating files from their computer hard drive during a criminal investigation.  Advising a target of the subpoena gives them advance notice so that they may destroy evidence.

The fact that a member of the Board of Supervisors would readily disclose that she had been tipped off by County Council in time to destroy evidence shows the hubris of the corrupt element in Los Angeles government.

The Commission on which Ms. Giggans served found subpoenaing records in a criminal investigation to be “outrageous.”  Then, they passed a resolution asking the sheriff's department to disband the public corruption unit due to a conflict of interest.  In Los Angeles, if law enforcement investigates white collar crime in the government, that is called a “conflict of interest.” Boy, I bet Trump wished he could have the DoJ disbanded for its raid on Mar-a-Largo.

Sheriff Villanueva’s opposition in the November 2022 sheriff election is El Títere, Robert Luna, former Long Beach Police Chief.  Rather than investigate criminal activity in government, his key word is “collaborate.”   El Títere would collaborate with the targets of criminal probes. Robert Luna clarified, “The first thing I would do as Sheriff is I would stop this us versus them culture and mentality."  Yep, that’s Los Angeles in 2022, law enforcement should not have a “us versus them” mentality with targets in white collar criminal investigations.

Previously, Sheriff Villanueva had provided evidence to Los Angeles County District Attorney Gascón about the non-bid contracts between LA County and Ms. Giggans.  The fact that Supervisor Kuehl was good friends with Ms. Giggans on no-bid contract ($800,000.00 some allege) should have raised eyebrows, likewise for Giggans’ being on L.A. County Civilian Oversight Commission.  LA District Attorney Gascón declined to even investigate, asserting that the sheriff’s evidence to date “did not prove criminal conduct beyond a reasonable doubt.”  In what upside down society, is the standard to investigate corruption “proof of criminal conduct beyond a reasonable doubt”?  That is the standard a jury uses to convict; it is not the standard to investigate.  No one has denied that Kuehl’s good friend, Giggans, got on-bid contracts.  Instead, everyone trashes Sheriff Villanueva.  Sept 21, 2022, LA Times, ‘Third World Tactics’? What’s Behind L.A. County Sheriff’s Search of Sheila Kuehl’s Home?, by unnamed LA Times staff

Sheriff Villanueva simply refuses to recognize reality. His job is to collaborate with criminals, not investigate them.