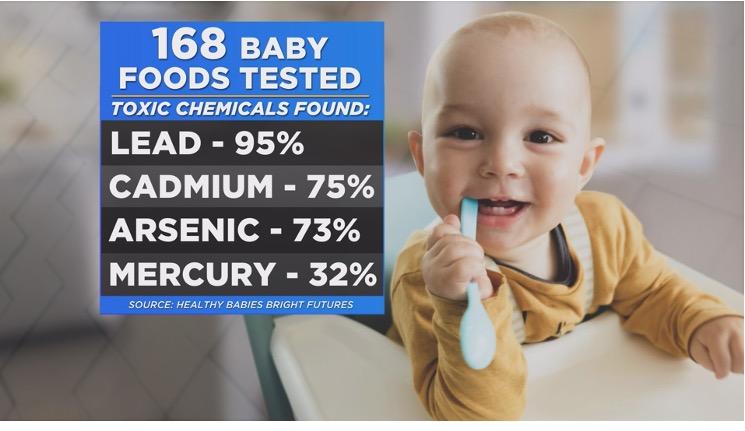 ACCORDING TO LIZ - One out of every six children in the United States has a developmental disability. One in every 45 has been diagnosed with autism spectrum disorder.  What gives?

Part of the problem may be what is contained in the food people in the United States are feeding their babies. Even small amounts of heavy metals can impair brain development.

A 2019 study by Healthy Babies Bright Futures created quite a stir when it showed that 95% of pre-packaged baby foods tested were contaminated with lead, arsenic, cadmium, and mercury. This led to a Congressional investigation that confirmed these conclusions, and a recommendation that people consider making their own baby food.

Parents, doctors, teachers and politicians can no longer delay insisting that the U.S. Food and Drug Administration (FDA) act immediately to ensure our next generations of adults have the cognitive ability to realize their full potential.

Healthy Babies Bright Futures is a partnership of nonprofit organizations, cities, scientists and donors, and its mission is to reduce babies’ exposure to toxic chemicals that “contribute to autism, IQ loss, learning or behavioral problems, attention-deficit hyperactivity disorder (ADHD) and speech or cognitive delays.”

Los Angeles is not one of its partners, although far too many of our youngest children are doubly and trebly at risk due to freeway pollution, oil field seepage and flaring and, in the northeast, particulate matter and toxins from Glendale’s Scholl Canyon dump.

Baby food manufacturers continue to push their products to mothers and doctors despite having full knowledge of their toxicity.

How many of their ads mention these baby foods contain heavy metals that the FDA and the World Health Organization have proclaimed hazardous to human health, specifically for developmentally vulnerable infants and toddlers?

Of course, the executives pulling down seven-figure salaries and bonuses still sit in their corporate towers comfortable with the knowledge that they will be long gone before any lawsuits start trickling in.

After all, they pay lobbyists and lawyers handsomely to protect their interests.

Last week, however, Healthy Babies Bright Futures released a follow-up study based on 288 baby foods they tested themselves and drawing on published studies of almost 8,000 additional foods.

Their conclusions were deeply troubling and downright disheartening.

While there was paltry proof of improvement in commercial baby food, more critically they "found no evidence to suggest that homemade purees and family brands are generally safer, with lower metal levels, than store-bought baby food.”

"Heavy metal levels varied widely by food type, not by who made the food" because ultimately both commercial processors and families purchase produce grown in the same dirt and water.

Arsenic may have been popularized as a poison in Agatha Christie mysteries but in low doses it causes cancer and permanently reduces learning ability in children. Although it occurs naturally as well, what we are dealing with today has been exacerbated by its concentration in certain foods due to sprays (insecticides, herbicides and algaecides) and in seepage from treated lumber containing preservatives banned in 2003 but still evident in outdoor wood fencing (that greenish tone?), as well as from manufacturing (semi-conductors, microwaves, LEDs).

Big Pharma has been selling arsenic to chicken producers as a feed additive; this poison makes chickens fatter. If these birds have been banned by the European Union as being unsafe for human consumption, why are they still sold in American stores?

Arsenic is also in the air we breathe as a by-product of coal-fired power plants and is contained in some homeopathic medicines.

In other words, there are many ways for that toxin to enter our environment. And our babies’ bodies.

Traces appear in many other foods on our supermarket aisles, but just because more of these are ingested by older children and adults who don’t face the same neurological dangers, doesn’t mean that there is no need to measure and restrict them.

How often do people feed bits of grown-up food to the little ones? And how much of what Mom eats is absorbed through the placenta?

Rice absorbs arsenic ten times more readily than other grains which make rice products especially problematic in Los Angeles. Hispanics make up about half of families living here and are more than twice as likely to feed their children rice, while the 10% or more of our population of Asian origin consumes rice at almost ten times the national average.

The FDA’s response was typical government: they are aware of the report and plan to review it. Although “committed to moving as quickly as possible,” a spokesperson emphasized that “this is a complex issue that requires input from a range of stakeholders.”

And that’s before the good folks profiting gruesomely off business-as-usual throw a fork and a few million dollars into the works.

The FDA’s goal in their “Closer to Zero” action plan to reduce exposure for babies and young children to arsenic, lead, cadmium, and mercury “as low as possible.” While excusable given the natural prevalence of some of them, “as possible” allows a lot of wriggle room for corporate profiteers.

Given the glacially slow pace of any regulation endemic to our government, people need to demand action. At the Federal level, and from the County and City.

Demand immediate and targeted action as well as a broad informational campaign aimed at parents and doctors of the dangers, and how to protect their infants and patients.

Until then, caregivers can go to this website to read the Healthy Babies Bright Futures report, an executive summary, and check out the Parent Tip Sheet on how to reduce risks for their infants.