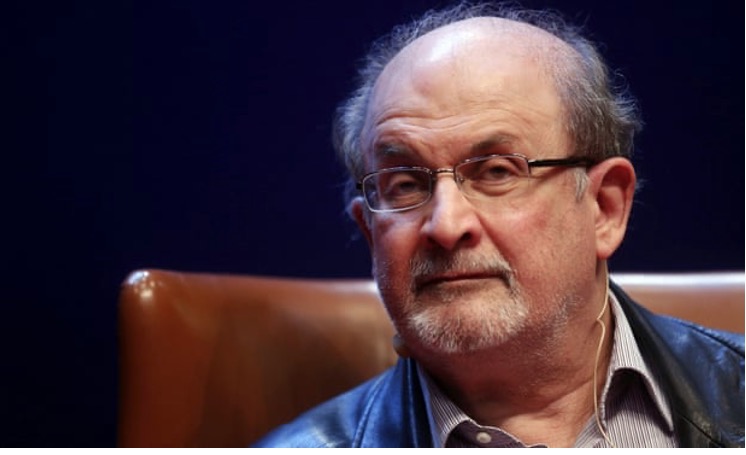 ACCORDING TO LIZ - “Originality is dangerous. It challenges, questions, overturns assumptions, unsettles moral codes, disrespects sacred cows or other such entities.

“It can be shocking, or ugly, or, to use the catch-all term so beloved of the tabloid press, controversial. And if we believe in liberty, if we want the air we breathe to remain plentiful and breathable, this is the art whose right to exist we must not only defend, but celebrate. Art is not entertainment. At its very best, it’s a revolution." —Salman Rushdie, "On Censorship"

Last Friday, Indian-born British writer Rushdie, whose novel The Satanic Verses led to death threats and a fatwa from the Iranian regime, was stabbed by an attacker multiple times while on stage to speak at the Chautauqua Institution near the city of Buffalo in western New York.

An Associated Press reporter who was present described a man rushing onstage while Rushdie was being introduced and stabbing the writer 10 to 15 times. The assailant was arrested at the scene and is being held without bail.  Rushdie was airlifted to an Erie, PA hospital for immediate surgery.

His agent Andrew Wylie later conveyed to Reuters and the New York Times that the author was on a ventilator and could not speak. “Salman will likely lose one eye; the nerves in his arm were severed; and his liver was stabbed and damaged.”

On Sunday he was taken off the ventilator and could speak. He remains in critical condition, his son advised that: “Though his life changing injuries are severe, his usual feisty and defiant sense of humor remains intact.”

Reports out of Iran are mixed. The government denies involvement but individuals and organizations are commending his attacker and say the writer is himself to blame due to his blasphemous portrayal of elements of the Qur’an.  But the Qur’an calls murder one of the greatest sins in Islam.

Rushdie went into hiding for almost ten years after the fatwa, during which time the book’s Italian translator survived a stabbing attack, its Japanese translator was stabbed to death, and the novel’s Norwegian publisher was seriously injured in a shooting.

If you don’t want to watch a movie like The Last Temptation of Christ, or read a book such as The Satanic Verses, there is no-one forcing anyone to do so. There are lots of other movies and other books, and if you start watching a movie you can always walk out in the same way that you are free to stop reading a book.

Of imminent concern on a tangentially-related front, is the proposed merger of Penguin Random House and Simon & Schuster which serves to accelerate the trend in publishing to focus on best- sellers at the expense of developing niche markets, fresh ideas and new voices.

But originality in thought, in science, in politics and in all forms of media is an essential component of growth and change in our society.

And, at the moment, desperately needed for the survival of our planet.