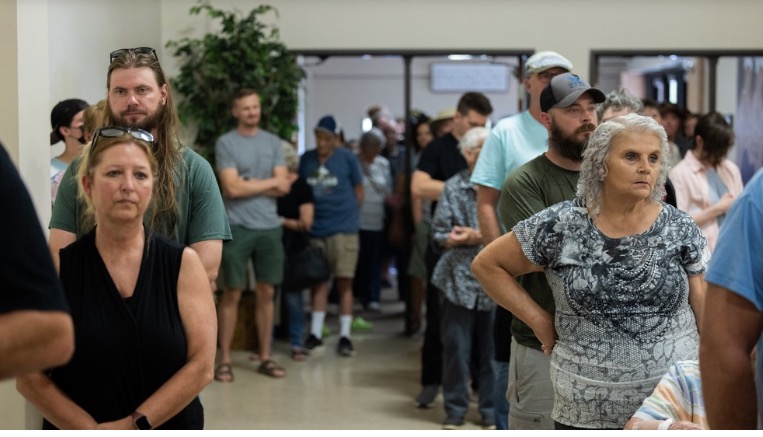 PERSONAL CHOICE - I want to talk about Kansas.

I’m moved to do so because on Tuesday the good people of Kansas voted against a ballot measure that would have stripped from their state constitution a woman’s right to choose, and they did it by a whopping 18-point margin.

For decades, the Republican Party has exploited social fissures in America – from immigration to race – as its means of deflecting attention from the immutable fact that most Americans, especially those without college degrees and depending on an hourly wage, have been on a long downward escalator, and an ever-larger portion of the economic gains have been going to the top. Republicans have had no economic response to this except to promote the gonzo fiction that tax cuts for the rich somehow trickle down.

For much of this time, Democrats have unwittingly aided this Republican strategy by eschewing the populist-progressive economic policies that attracted downwardly mobile voters in the 1930s and 1940s, and before that, in the 1880s and 1890s. Instead, modern Democrats have substituted a neoliberal stew of free trade, privatization, and deregulation (until big banks or corporations need to be bailed out). The stew has helped corporate Democrats to prosper but, as I’ve argued elsewhere, has left the working class in the dust.

But something has now happened that few predicted. The Republicans’ culture war has come back to bite the Republicans in their incidentals. The GOP has ventured into territory that even Kansans apparently decided was a dangerous overreach. A woman’s right to choose tipped the scales but the scales were already tipping as the GOP began to encroach on many aspects of private life: contraception, same-sex marriage, transgender bathroom rights, books, and religion.

Kansans, like most Americans, know the difference between what should be left to personal choice and what should be public. But in its ardor to fuel the culture war, the GOP forgot.

In addition, prairie populism lies just under the surface of the Kansas topsoil, as it does in much of the Midwest. Over the last several decades the giant corporations that supply Kansans with seed and fertilizer, and that turn the livestock and crops Kansans produce into food products, have grown much larger and more powerful. They are now among America’s biggest monopolies, siphoning off money from farmers as well as from consumers. If there’s one thing Kansans dislike as much as government intruding on their freedom, it’s big predatory corporations intruding on their meager profit.

Perhaps Kansas, as well as much of the rest of America, is ready for a dose of economic populism. If so, the Democrats’ pending “Inflation Reduction Act” – with its healthcare subsidies, declining pharmaceutical costs, and boosts for solar and wind power -- may prove more popular in the hinterlands than anyone expected.

As William Allen White, the famed progressive editor of the Emporia (Kansas) Gazette in the first half of the twentieth century, once wrote:

(White also wrote: “My advice to the women of America is to raise more hell and fewer dahlias.”)

(Robert Reich, is the Chancellor’s Professor of Public Policy at the University of California, Berkeley, and a senior fellow at the Blum Center for Developing Economies. He served as secretary of labor in the Clinton administration, for which Time magazine named him one of the 10 most effective cabinet secretaries of the twentieth century. He's co-creator of the Netflix original documentary "Saving Capitalism," which is streaming now. This article was featured in Common Dreams.)