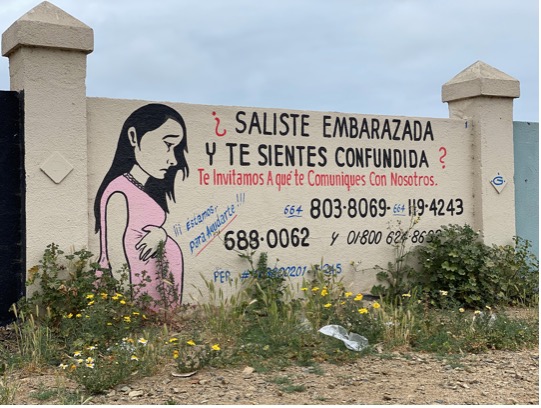 IMMIGRATION WATCH - Amid the bustle of Tijuana, the average onlooker might miss the bulge in Claudia’s belly.

That’s partially by design: Claudia, a petite 32-year-old who has been in limbo in Tijuana for over a year while waiting her turn to seek asylum, has become adept at keeping a low profile in a city that ranks among the most dangerous in the world.

In her mind, the fetus is already a child, even if he is months away from breathing his first breath. So she has already given him a name: Johan Santiago.

After Claudia’s prenatal appointment in the city’s single clinic for pregnant migrants, Claudia trudges back to a tent encampment — nicknamed “El Chaparral” — that acts as the waystation for hundreds of families fleeing poverty, violence and persecution. As she reaches the high point of the overpass connecting the camp to downtown Tijuana, she can just make out the rusting steel slits of the multibillion-dollar barrier, known as Trump’s border wall, to the north.

In that camp, where people like Claudia depend on Catholic charities for their meals and hand-me-down clothing from departing families, she joins her partner Michal and her six-year-old son Joseph. She sits with them beneath the undersized blue tarp they currently call home, swaddled beneath a colorful knee-length sarape-style cardigan. And, together, they wait.

“Being hungry, thirsty, cold — these things are what you have to go through,” Claudia says, referring to her mission of moving to — and giving birth in — the United States.

Claudia, who came to Tijuana from the Honduras, is one of the thousands of pregnant women among the hundreds of thousands of migrants who reach the U.S.-Mexico border each year with hopes of crossing it. She’s also one of the millions of migrants who, during the pandemic, have been turned away from seeking asylum on the soil of the United States.

Since March 2020, intensified border policies initiated by the Trump administration have largely been maintained by U.S. courts. Contrary to Biden’s campaign promises, little has changed since his inauguration in January 2021, and some anti-immigration programs have been expanded under his watch. And despite a June 30 ruling by the Supreme Court in favor of reversing one of these policies forcing migrants awaiting asylum hearings to stay in Mexico, the White House’s ongoing implementation of others means the court’s decision is, for the time being, little more than symbolic.

Moreover, these decisions in D.C. have left the many asylum-seekers like Claudia fenced off in Mexico’s northernmost cities beneath advertisements for popcorn chicken buckets and cheap liposuction. As tens of thousands of migrants from exempted countries, like Ukraine, pass largely unimpeded through the San Ysidro border station, migrants just miles south of California, Arizona, New Mexico, and Texas remain mired in a disconcerting — and dangerous — limbo.

Border towns like Matamoros, Reynosa, and Ciudad Juárez — which are overrun by ubiquitous and particularly ruthless gangs — can be perilous places for anyone, let alone those who have fled their homelands carrying little more than a backpack. This is especially the case for pregnant women. There have been more than 10,000 violent attacks on migrants living at the border since the Trump anti-immigration policies were enacted, according to the nonprofit group Human Rights First. And those are just the ones that victims or witnesses report, attorneys and NGOs working in the region say.

Pregnant women, advocates say, make for some of the easiest targets for the cartels that menace, exploit, and extort migrants at the border because they tend to be among the most desperate and most physically vulnerable. Women have been kidnapped, beaten, and shot by gangs hungry for profits, advocates say — violence that, on more than one occasion, has triggered women to go into labor.

“In the past three years, there’s been a real dismantling in the right to apply for asylum,” says Ebadolahi, who is a senior staff attorney with the ACLU’s Border Litigation Project. “That’s led to a tremendous amount of human suffering, where vulnerable people are trapped in dangerous border towns where they’re routinely preyed upon.”

Across the world, the lack of maternal health care is a leading cause of mortality among mothers and infants, causing death rates that are routinely 10 times higher in low-resource settings than they are in the U.S. In border towns like Tijuana, pregnant migrants struggle to access routine care due to costs, lack of awareness about access and transportation, and discrimination.

Procedural strangleholds created by U.S. policies have helped lead to ballooning migrant populations in towns like Tijuana, placing additional strain on stretched health systems. Tijuana’s hospitals were among the many in cash-strapped settings around the world that stopped treating anything other than Covid-19 during the pandemic. Meanwhile, stopgap nonprofit clinics — overwhelmed and under-resourced in normal times — were stretched thinner still.

“It’s a completely untenable situation that has just exploded since so many people have no pathway in,” says Andrea Leiner, chief communications officer for Global Response Management, a humanitarian aid organization that operates medical clinics throughout Central America.

Taken together, interviews with more than three dozen migrants, clinicians, advocates, attorneys, and government officials spread across five border cities over two years convey how living indefinitely at the border has aggravated the risks faced by many like Claudia and Johan.

“In a lot of ways, it’s worse than it’s ever been,” Leiner says.

The ‘feminization of migration’

At a Honduran police station in 2019, Claudia realized she had no choice but to leave the country of her birth. She had endured years of verbal abuse and violent fits from her husband, she says, and “just couldn’t take it anymore.”

(Eli Cahan is a researcher at the Stanford University School of Medicine and a journalist whose work has appeared in VICE, the Los Angeles Times, The Guardian, Foreign Policy, Seattle Times, Philadelphia Inquirer, Vox, PBS, Science, Scientific American, and others. His research has appeared in journals like the NEJM, JAMA, Health Affairs, and others. This article was featured in Capital & Main.)