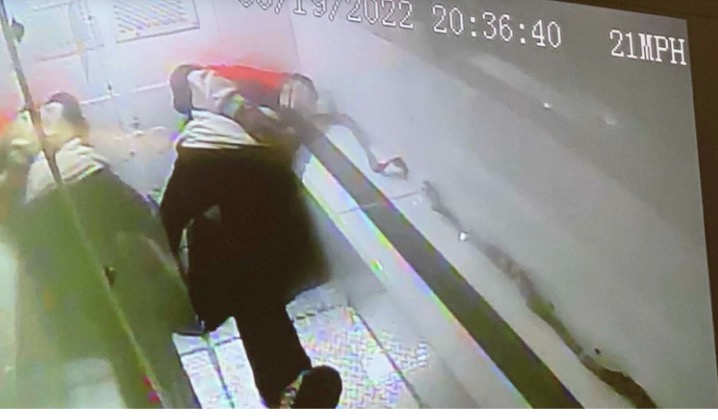 SAY WHAT? - A mournful reminder that as America's macro atrocities go on apace - against women, schoolchildren, immigrants and now the planet - so do its personal, everyday, often unseen acts of barbarity. Seven years after Freddie Gray (black) died of a broken neck in a Baltimore police van "rough ride" - and all six officers went free - Richard 'Randy' Cox (black) is paralyzed from a broken neck in a New Haven police van "rough ride." Cox, 36, was arrested on June 19 after someone at a party reported he had an apparently unlicensed gun tucked into his pants; handcuffed behind his back, he was loaded into a metal transport van with no seatbelts. At one point the driver, officer Oscar Diaz, stopped abruptly; body cam footage shows him lurch to a stop, followed by a sickening thud. Diaz said he was trying to avoid hitting another car, but footage shows he was speeding - 36 mph in a 25 mph zone - and residents say they often see police "careening around" in the vans to terrorize helpless prisoners inside. "Horrific" video released this week from inside the van shows Cox sitting uneasily in back as the van hurtles toward the station, trying to find a grip somewhere. When Diaz slams on the brakes, Cox' body suddenly, swiftly hurls along the smooth metal floor and cannonballs headfirst into the back of the van. He lies still. A few seconds later, you hear him softly whimper, "Help....help...help."

Diaz stops the van, gets out, goes back to check on Cox, asks why he's splayed on the floor. "I can’t move,” Cox responds. “I fall. I cannot move my arms.” Despite standard police protocol to wait for medical help if a suspect is in distress, Diaz gets back into the car and radios for an ambulance before driving to the station. There, he and three other officers, including Sgt. Betsy Segui, start shouting at Cox to get up and come out of the van. Cox repeatedly tells them he can't move, he can't feel anything and he thinks his neck is broken. Berating him - and despite standard human protocol - the cops roughly drag him from the van, sit him on the ground, and try to lift his limp body into a wheelchair; he keeps sliding out and they keep shouting “sit up” and “stop playing around.” "You drank too much," leers Segul several times. "Sit up!" After processing Cox, again on the floor, they drag him to a holding cell and toss him in. "He's perfectly fine," Segui declares, holding a set of handcuffs. "Want me to put these on him" She cuffs him on the ankles and they close the cell door. After police eventually called for a medical unit, Cox was taken to the hospital for emergency spinal surgery. He remains hospitalized and paralyzed in critical condition, immobile from the neck down, sustained with a feeding tube; he communicates by blinking and bobbing his head.

Except that he's alive for now, Cox’s case bears an eerie resemblance to that of Freddie Gray, 25, who died of a broken neck in 2015 after Baltimore police arrested him for a possibly illegal switchblade, loaded him into a prison van, and drove him roughly around for 40 minutes before taking him to the station, where he was unresponsive. His death, ruled a homicide, prompted widespread protests; State’s Attorney Marilyn Mosby charged six officers with crimes ranging from manslaughter to "second-degree depraved-heart murder," but they all walked free thanks to what she called "an inherent bias (when) police police themselves." "This is Freddie Gray's case on video," said civil rights attorney Benjamin Crump, who is representing Cox's family.  "Thank God we have the video so they can't deny what happened." At a press conference, Cox's sister LaToya Boomer called the newly released video - with Cox's "head bobbing (and) police dragging him around" - "mind-blowing." "I want to know where was the person who sees what's going on and says, 'Maybe he's not drunk, maybe he is in distress,'" she said. “At any point in time, if someone is saying, ‘Help. I think my neck is broken. I can’t move’ - how many times do they need to say it?” Added an angry Crump, “Was he not worthy of humanity?”

New Haven officials say all the officers involved in Cox's treatment have been placed on paid administrative leave, and state police have taken over the investigation. At a town hall meeting called by the state's NAACP, a "disheartened" city leader noted, "This isn't a proud moment for me or the police department" but insisted, "We're going to make changes...We're going to do everything to get Randy justice." Upgrading his original white-bread response that the treatment of Cox was "quite concerning," the mayor added that while he didn't think clearly inept, ill-trained, hostile and likely racist police acted with "malice" by deliberately trying to break the neck of a suspect charged with a relatively minor crime, he saw "a level of callousness that is deeply concerning," so there's that. Other responses: The police department’s public information officer said they "continue to wish Mr. Cox a speedy and full recovery," city officials said all three police vans have been taken out of service while seat belts are installed in them, and police said they are "reviewing and updating" procedures for moving anyone who's been arrested, hopefully with the goal of providing transportation suited to a human being, not a wild animal. Randy Cox, who remains on a ventilator, had no comment. Warning: Video is brutal.