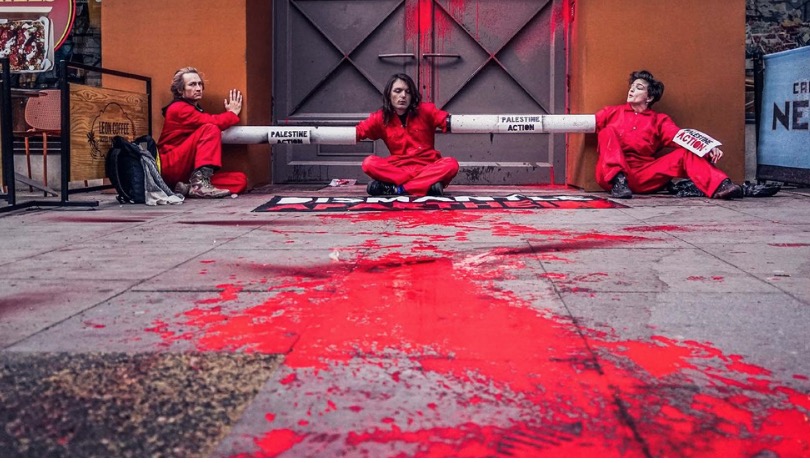 SAY WHAT? - Offering a glimmer of hope "the merchants of death are not invincible," Palestine Action has successfully, permanently shut down the London headquarters of Israel's largest arms manufacturer Elbit Systems, with multiple sites in the U.K., after pummeling them with six actions in six weeks. Elbit makes 85% of Israel's drone fleet along with bullets, tear gas, surveillance equipment et al; the company likes to boast its weapons systems are "battle-tested on Palestinians." The London closure marks Palestine Action's second rout of a British Elbit site in less than two years, prompting the group's defiant new slogan"2 Down, 8 To Go." London's office was also the site of the group's  inaugural action in an 18-month campaign that used fiery direct action and civil disobedience - occupations, blockades, defacement, smoke flares, throwing fake blood, locking themselves together - to demand the U.K. end its complicity with Israel's apartheid regime and #ShutElbitDown.

Last week, after 15 actions against the London office, sister actions against its landlords and dozens of arrests, the group announced Elbit had "left the building," closing its posh office at 77 Kingsway. The move came just five months after Elbit also sold its large plant in Oldham, reportedly at a loss, after repeated protests there. In a mark of the success of Palestine Action and other BDS groups, Israel champion and U.K. Home Secretary Priti Patel has proposed a National Security Bill that would stymie pro-Palestinian efforts - or "hostile state activity" - by giving protected status to companies making "aircraft (equipment) used for military purposes." Clearly undeterred, Palestine Action continues to target Elbit's eight remaining sites. Most recently, they returned to an Elbit subsidiary in Shenstone making drone engines to scale the roof, occupy the building, dismantle the equipment and declare, "If you aid war criminals, you are war criminals." Their message there, as in London and Oldham: "We've proven direction action works. Maybe (Elbit) should have a think - we are not going away."