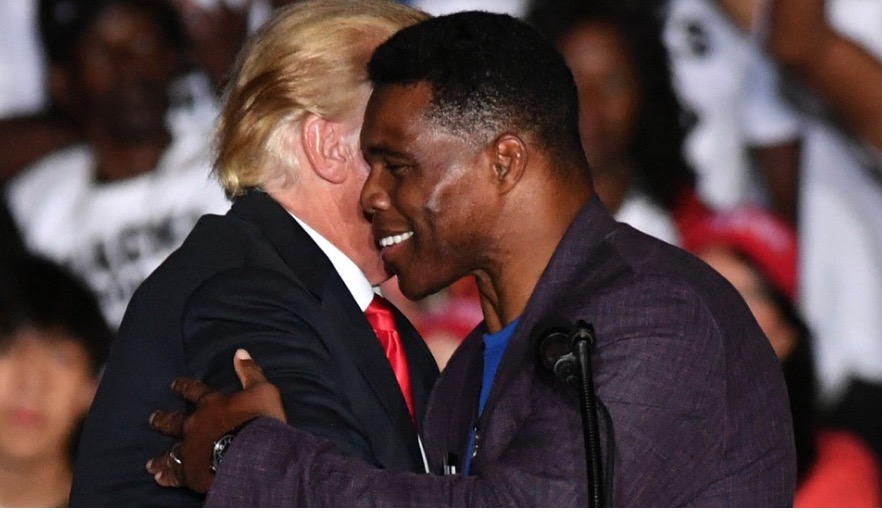 SAY WHAT? - Woefully amplifying our relentless, dismal descent into stupid, Georgia Republicans have chosen for their GOP Senate candidate, in John Lewis' state yet - the staggeringly unseemly Herschel Walker, an ignorant, incoherent, homophobic, MAGA-tainted, gun-toting, black former NFL running back - Run, Forrest, run! - with a history of violence against women who's "dumb as paint," likely ill with CTE or multiple personality disorder diagnosed by a therapist who believes in "Satanic demons," and, "even by recent GOP standards, an absolute fire hose of lies" about....everything, from his (imaginary) work in law enforcement to his (inflated then deleted) college education to his (borderline scam) chicken and fabric businesses, to, now, his (ever-evolving) family history with this week's revelations that the guy who's long and loudly reviled fathers who leave a child has (first) one and (then) three more kids than he'd previously acknowledged and who, yes, he left. Whew. The latest deception of many offers dubious testament to his mentor, another famous know-nothing bigot who leveraged his celebrity and the amorphous fears of a populace facing massive change to reach a pinnacle of power they're extravagantly unfit for: Walker, says one pundit, "may literally be the only person who lies more than Trump," who reportedly lied over 30,000 times without "the Lie Cops" busting him. In that and other sordid ways, "His candidacy is ultimately a test of how much Trump broke our politics" - though, to get real, it's not like it was in such great shape before. Still, let us count the sorrowful ways.

Given his egregious negatives - again, even by the GOP's down-and-dirty low bar - Walker, 59, has garnered an impressive collection of headline dunks: "Herschel Walker Doesn't Know Anything," "What Is Herschel Walker Lying About Now?" "There Is Something Very Wrong with Herschel Walker," and, from The New Republic, "Herschel Walker Is Running to Be the Senate's Dumbest Liar." Calling the former bobsledder and NFL star "a serial fabulist, MAGA cultist and as stupid as they come," they note, like many before them, that Walker literally can't put two words together into a comprehensible sentence and the 'False Statements' part of his Wikipedia page is longer than the one describing his campaign. Walker's major claim to fame at this point: For Republicans "as they veer further into the right-wing fever swamp," he will illustrate "just how far they can extend Trumpism and pass his qualities (sic) on to candidates who don't have his surname," all in the inane name of owning the libs.  Pointedly if not very carefully picked by Trump to challenge Raphael Warnock - let's get another black guy! he played football! he's dumb as a rock! - Walker likes to boast of his 37-year "deep personal friendship" with Trump, whom he seeks to emulate and who he swears "isn't racism." "It hurt my soul to hear the terrible names that people call Donald," Walker said. "I want to be a leader like (Trump) when I get to that Senate seat to show everyone I love America." And then maybe he'll find out just what they do in the Senate, too.

Meanwhile, a steady stream of stories have called out what the media politely calls Walker's "concerning comments," aka lies. He claimed he was high school valedictorian (not), graduated in the top 1% from the University of Georgia (dropped out), and lied about lying: “I never have said that statement, not one time.” The proud member of the party of family values pointed a pistol at his first wife and said, "I'm going to blow your fucking brains out"; after she filed for divorce and got a protective order against him, he told his next girlfriend he would "blow her head off." He's said his chicken processing business had hundreds of employees and annual sales of $70-80 million, but in a COVID aid request and court case it reported 8 employees and $1.5 million in revenues; associates said he was unreliable, he unwisely wanted to expand into frozen waffles, and besides he doesn't own it. In February he bragged his hospitality business made custom bedding and drapery for major hotels, but it dissolved a year ago and he didn't own it either. He's falsely claimed "I've been in criminal justice all my life" - as "a certified peace officer," a Cobb County police officer, an FBI agent, and an "honorary deputy" a real cop said is "like a junior ranger badge." In 2001, he did have one interaction with police when, armed with a gun, he hunted down a guy who was late delivering a car Walker had bought; after he saw a "SMILE, JESUS LOVES YOU," he decided to seek mental health treatment. He was diagnosed with dissociative identity disorder by a therapist who argues it's caused by Satanic demons, tests for it by asking patients to color in brain lines with crayons of their choice, and practices gay conversion therapy.

Along with the lies has come Walker's "tendency to stumble," aka babble nonsensically. At a church event in March, he questioned evolution: If humans came from apes, "Why are there still apes? Think about it." In a 2020 podcast, he promoted walking through a snake oil "dry mist" to "kill any Covid on your body." Marking his primary victory the same day as the Uvalde shootings and asked about gun control, he offered pure, "beyond brutal" gibberish: “What I like to do is see it and everything and stuff." On Fox the next day, he added, “Well, you know, it’s always been an issue...People see that it’s a person wielding that weapon, you know, Cain killed Abel. And that’s the problem that we have. And I said, what we need to do is look into how we can stop those things. You talk about doing a disinformation, what about getting a department that can look at young men that’s looking at women, that’s looking at their social media? What about doing that?" Umm. Okay then. Unsurprisingly - cue crude jokes he's the CTE candidate, for the progressive brain condition football players can get - after he launched his campaign Walker avoided interviews and skipped all five debates with primary opponents, who then convincingly accused him of running for office while hiding. Walker just took a ragged page from his hero and deflected, denied, kept jabbering. In his post-victory speech, he thanked his personal savior Jesus Christ, said politicians are ruining the country, charged Biden has declared war on energy etc. From a GOP consultant fluent in bullshit: “He doesn’t speak in beautiful syntax, by any means, but, you know, I think his voters will say what they said about Trump quite often, ‘Well, I know what he was trying to say.’”

This week, The Daily Beast may or may not have fatally dented his idiot invincibility with two bombshell stories: The righteous Walker who's long trashed absentee fathers, especially black, as "a major, major problem" is himself the absentee father of not just one, but three kids he's never mentioned. In a long bonkers interview with MAGA groupies Diamond and Silk - I grew up with law and order! We're waterin' down racism! BLM wants to destroy the nuclear family! - Walker blasted NFL and NBA athletes who give "millions" to Black Lives Matter. "Let's not do that," he said. "Let's go in all the neighborhood (sic) and let's become fathers of those fatherless child (sic." Above all, "If you have a child with a woman, even if you have to leave that woman, you don't leave the child." Except he did, not once but thrice. Walker publicly co-parents - with his ex plus current wife - his 22-year-old son Christian, who has an "anti-woke" podcast, celebrated finishing college "without contracting leftism," and posts anti-Pride, gayest-ever videos shrieking, "Honeybun, why do you need a month to celebrate who you sleep with?" and "Fathers, control your ding-a-ling (and) raise your damn kids." Irony still lives: The Daily Beast first reported Walker has a 13-year-old son whose mother waged a two-year legal battle to get Walker to help support him. The next day, another son, 10, surfaced, and an adult daughter, though after the first story the campaign only acknowledged "one child out of wedlock." "They're not 'undisclosed' - I've never denied my kids," argued Walker. "I chose not to use them as props to win a political campaign."

God save us from that particular, disheartening outcome. But for now - WTF - Walker and the eloquent, principled, principled, knowledgeable-about-the-history-of-race-in-this-country Rev. Raphael Warnock, pastor of MLK's former Atlanta church, are said to be tied in most polls. We'd ask how this can be, except it's the state where MTG got elected so here we are. Warnock recently released his first ad: Letting the tawdry evidence speak for itself, it shows Walker touting his magic, mind-bending, COVID-killing mist. Finally unable to hide any longer, Walker has agreed to three debates in the fall with Warnock, and is consulting with the bottom-feeder likes of Newt Gingrich, Joni Ernst, Ted Cruz and Lindsay Graham. Bring popcorn. Meanwhile, Walker keeps bumbling and stumbling along. Most recently, he was asked about Warnock's support for the John Lewis Voting Rights Act, in honor of what most sentient mortals know was the great Rep. Lewis' fervent life's work. But Walker opposes voting rights, as thoughtfully as ever: "You know what's sad about that - to use the name of a great man to brand something that is so bad, I think it is terrible to do. Senator (sic) Lewis was one of the greatest senators that's ever been and for African Americans that was absolutely incredible. To throw his name on a bill for voting rights I think is a shame." The Act, he declares, "just doesn't fit what John Lewis stood for." Sigh. Georgia voters, you know what to do.

"Let's go to the voting rights, if you want to talk about voting. First of all, if you want to get people to vote, if they're legal to vote, you want to try to encourage people to vote...not encourage, but encourage. And what I mean by that is, you get things done now - don't talk about it after or talk about it during, but get it done right now. And no one is not legal to vote. Why don't we go in and get the IDs and get everything done right now instead of waiting until it's time to vote and start talking about it. And I think that's what people got to remember." - Herschel Walker, orator and statesman.