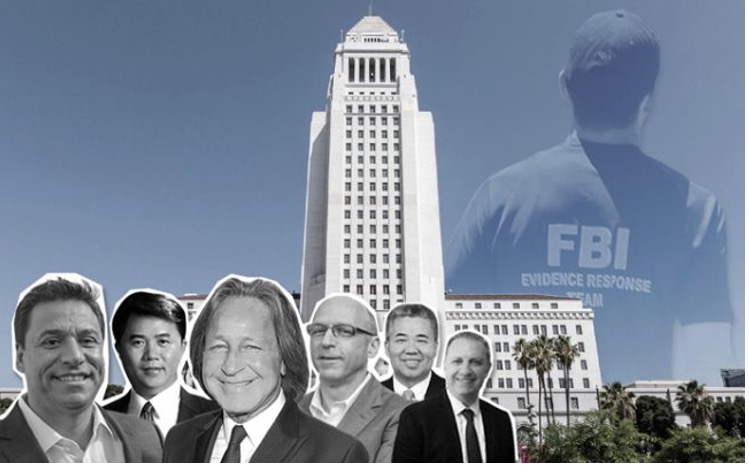 PLANNING WATCH - Who has the time to keep track of the real estate scams that regularly wallow up at City Hall, always packaged with fanciful justifications that fall apart when scrutinized?

One of the latest scams, that a reader spotted, has an innocuous title: Affordable Housing Overlay Zones (AHOZ).  Packaged as a well-intentioned low-income housing program, its hidden agenda (i.e., facilitating speculative real estate investment) is hard to spot.  After all, who wants to oppose affordable housing in a city with rising homelessness?

The story of this real estate scam began with an October 27, 2021, City Council motion instructing the Department of City Planning  (LADCP) and Los Angeles Housing Department (LAHD) to prepare a report on an Affordable Housing Overlay Zones ordinance and updates to existing housing incentive programs that prioritize 100 percent affordable projects in “high opportunity” (i.e., expensive) neighborhoods.  The City Council’s Planning and Land Use Management Committee later amplified this motion, with my translation into accessible English added.

The next chapter in this saga was a detailed report from the Department of City Planning for LA City Council’s Planning and Land Committee (PLUM).  This April 27, 2022, report elaborated the original Council motion and the PLUM Committee’s instructions.  This report included these highlights:

“Jurisdictions like Los Angeles don’t have anywhere sufficient funding or land to build the necessary affordable housing to meet the need.”  (Translation: The elimination of Federal public housing programs has left cities high and dry.”)

“Because 100% affordable projects largely require public subsidies, which are severely limited, allowing some moderate income or market rate units in some projects may facilitate greater affordable housing production, particularly if a key aim of the AHOZ is to bring production to higher resource areas with more expensive land costs.”  (Translation: Private and non-profit developers will not build low-cost housing units unless they are a small percentage of new, super-sized market-rate apartment buildings.)

“A well-developed affordable housing incentive-based program already exists in Los Angeles and updates of the Density Bonus and TOC programs are a core component of the Housing Element’s required rezoning program, set to launch this year.  Creating a new overlay system that is disconnected from the City’s existing incentive programs would add complexity to create two separate affordable housing incentive structures.” (Translation:  City Hall should focus on the massive up-zoning proposals in the new Los Angeles Housing Element.)

Unverified Assumption 1:  The main barrier to the construction of low-income housing is zoning regulations, especially City Council-adopted ordinances regulating building size, height, and parking requirements.  If cities, like Los Angeles, eliminated these laws, more low-income units would be constructed, and homelessness would decline.

Unverified Assumption 2:  Deregulation (i.e., the elimination of zoning ordinances and implementing regulations) especially in resource-rich neighborhoods with close proximity to schools, libraries, community centers, and parks, allows the construction of low-income apartments where they are most needed.

Unverified Assumption 3:  Low-income people of color who move into this new housing would experience upward mobility.

The complexity of overlapping low-income housing programs, as carefully described in this report, explains why these approaches, even if augmented by new Affordable Housing Overlay Zones, are so ineffective.  But even if the barriers to these market tweaks were removed, the new and improved market-based housing programs would only produce a small fraction of sorely needed low-priced housing.  In Los Angeles alone, where the population declined from about 3.9 million to 3.7 million in recent years, the unmet need for low-cost housing is enormous.  In 2017 the Los Angeles Times reported that 600,000 Angelino were expected to apply for Section 8 housing vouchers, the Federal government’s remaining low-cost housing program.  Yet, because of underfunding only 400 people per year secure Section 8 housing in Los Angeles.

As for other low-priced housing programs, like Density Bonuses, the LA Planning Department’s on-line housing dashboard reveals that, even if totally successful, private sector and non-profit housing corporations can only build a small share of the low-priced housing that Angelenos need.  From 2015 through 2022, the Planning Department approved 16,000 low-income housing units.   What we don’t know is the number of these proposed low-income housing units that were then built, certified, and rented to verified low-income tenants.

Unasked and Unanswered questions:  As for entirely low-income apartment projects boosted by the AHOZ, City Planning reports it received 18 applications for such low-income buildings and their 875 dedicated low-income apartments.  Were any of these projects ever completed and then rented to vetted low-tenants?  If you can answer these questions, please let me know ([email protected]) since my research came up dry.

If every low-income project approved by City Planning were built, there would be 16,000 units of new low-income housing in LA, plus 875 additional units in totally low-income housing projects.  If these units were rented to vetted low-income tenants, 16,875 low-income people could finally find a place to live.  While this outcome makes a small dent in the 600,000 thousand Angelinos lining up for Section 8 housing vouchers, the need for low-priced housing in Los Angeles vastly surpasses the ability of the private and non-profit sectors to build this missing housing.

City Hall’s Reaganesque approach to building low-income housing overlooks several other critical factors responsible for the housing crisis, all of which will remain intact if the City Council approves an AHOZ ordinance.  What does this structured absence (i.e., the elephant in the room) ignore?

Poverty is increasing, and the Federal Reserve’s policy of inducing a recession by raising interest rates means the worst is yet to come.   More people are about to slip into poverty, joining the estimated 37 million people who are officially poor.  But this government statistic excludes most poor people, and according to the LA Times, about half of the US population struggles to make ends meet.   This includes 53 million people who make the average low wage salary of $18,000 per year, many of whom live above the official poverty line.

The Federal government nixed public housing programs decades ago:  In addition to low wages and recessions fueling the housing crisis, the main source of low income housing used to be the Federal government’s public housing programs.  But the Nixon, Reagan, Bush I and II, and Clinton administrations ended them.  The cost of restoring these public housing programs is not cheap.  When Senator Bernie Sanders ran for president, his 2020 platform called for spending $2.5 trillion over 10 years to build 10 million units of permanent low-income public housing.  At $250 billion per year, this is about 1/5 of the US government’s $1.4 trillion annual “security” budget.  The take-away message is that the barriers to end the housing crisis are strictly political, not financial.

Loss of existing low income housing.  Another factor that City Planning’s report failed to mention is the continued loss of existing low income housing.  One measure of this loss is the number of Rent Stabilized Units destroyed to make way for new market rate apartment buildings in Los Angeles.  According to the Coalition for Economic Survival developers demolished 27,372 Rent Stabilized Units between 2001-2021, per the State’s Ellis Act.  In addition, an unknown number of low income units were bulldozed or removed from the market by induced evictions and paid move-outs.

In combination, the excellent Vacancy Report, prepared by the UCLA Law School in cooperation with non-profits SAJE and ACCE, carefully calculated the amount of affordable housing removed from the market by real estate investors and then replaced by expensive housing.  The Vacancy Report found:

“High vacancy rates in expensive luxury housing developments are a core symptom of a broader speculative housing system that is failing to benefit our communities. Speculative practices yield an unbalanced production of vacant luxury development at a time when evictions are fueling a loss of affordable rental units, increasing numbers of corporate landlords are unaccountable to low-income tenants, and we are failing to build enough covenanted, deeply affordable housing. All of this accelerates our houselessness crisis. We must prioritize using housing to actually house people and reorganize the market to meet this goal.”

The handwriting is on the wall.  Even if City Hall’s unsuccessful efforts to encourage private and non-profit housing developers to build low cost housing finally succeed, without dramatically raising wages and restoring terminated Federal public housing programs, the homeless crisis is here to stay.

(Dick Platkin is a former Los Angeles city planner who reports on local planning issues for CityWatchLA.  He serves on the boards of United Neighborhoods for Los Angeles (UN4LA) and the Greater Fairfax Residents Association.  Previous Planning Watch columns are available at the CityWatchLA archives.  Please send comments and corrections to [email protected].)