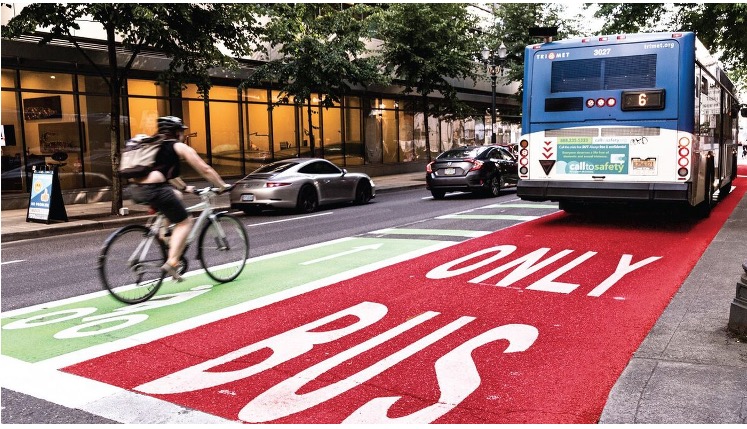 LA TRANSPO - The August 10, 2022, edition of the Los Angeles Times ran an article on a ballot proposal to require bike and pedestrian lanes in the City of Los Angeles when the city's roads are paved.

On the 2024 city ballot will be a voter initiative which, according to the Times, will add bicycle lanes, build wider sidewalks, plant more trees and create more visible sidewalks.

The initiatives backer, software entrepreneur Michael Schneider leads the organization "Streets for All." Schneider seems impatient with the the City of Los Angeles' execution of the city's current plans on mobility and bicycles, and City Council President Nury Martinez's own counterproposal for bicycles and pedestrians.

The Times only mentions bike lanes in the initiative with no mention of bus only lanes. Schneider calls his initiative a "nuclear option." Playing with weapons is never to be taken lightly, particularly nuclear ones, and his initiative will not lead the city, and the region, in the fight to reduce carbon gases needed to mitigate the climate emergency we now live in. The initiative seems more for the bicycle riders for ride for recreation, and does not take into account transportation for getting to work, shopping, eating, entertainment and other activities of urban dwellers.

I fully support providing more protection to bicycle riders and pedestrians. I did not own a car until I was twenty-two and relied upon my bicycle. But, I have not ridden my bicycle for years because the roads are too dangerous. I was encountering increasing numbers of drivers who don't drive well, are distracted, or just like to harass bicycle riders.

I have been a regular rider of buses since 1993, and that also makes me a pedestrian and we are experiencing far too many tragic accidents resulting in deaths and injuries.

If vehicle lanes are to be removed and replaced when the roads are repaved, as in the initiative, the replacements must be bus only lanes, not bicycle lanes, or both.

As an independent contributor to CityWatch I do not have at my disposal a research team or department, and my time for personal research is limited, so I would like to give my personal accounts and observations, backed by some research, on why bicycle lanes to combat the climate emergency are not practical in Los Angeles and Southern California.

Why bus only lanes must be given priority over bicycle lanes when roads are reconfigured:

Additional information from the Census Bureau:

Transit riders outnumber bicyclists on the order of ten times greater. This bolsters the need for bus only lanes over bicycle lanes because a far greater number of people will be served by bus only lanes. These lanes will reduce travel times because the buses will not be in the knots of gridlocked vehicle lanes but will be able to travel faster in their own lanes.

Vehicle exhaust is one of greatest sources of carbon gases which have places us in our climate emergency. To entice workers out of their vehicles speed of travel is very important. Making faster speeds in bus only lanes will be a very attractive option to craziness of driving in Los Angeles.

While riding buses workers can safely read e-mails and text messages, and use the internet. Reports can be read without worry of becoming distracted if driving. Bus riders can relax and before their time to start work prepare for the day, and after the work day relax. I have taken many naps on buses. The is no napping while riding a bicycle.

As a resident near LAX, about four miles from the beloved Pacific Ocean, the temperatures are not as extreme as in other places in the Los Angeles Basin. Today it is 81º at LAX; 94º in Glendale; 95º in El Monte; and 98º in Northridge. To ride a bicycle in some of these temperatures would not be pleasant, can could dangerous. Buses are air conditioned.

In addition to injuries, some very serious, from falls from bicycle riding, there are proven health risks to bicycle riding in urban areas. From Science Daily: "People who cycle through London and other major cities have higher levels of black carbon in their airway cells, experts from the UK have shown.

The research, presented at the European Respiratory Society's Annual Congress in Amsterdam, suggests that cyclists inhale more black carbon than pedestrians, which may cause damage to the lungs.

The combustion of fossil fuels results in the generation of large numbers of inhalable particles of soot (black carbon). There is increasing evidence that inhalation of black carbon particles is associated with a wide range of health effects -- including heart attacks and reduced lung function." LINK

In the smog laden Los Angeles Basin this does not bode well for bicycle riders.

We are in the global warming climate crisis, and it will only get worse if we do not immediately reduce our carbon footprints by driving less. While bicycle riding is one option to confront this crisis, it is not the best option. That best option is leaving vehicles at home and riding buses, and trains, and riding buses is greatly enhanced when there are bus only lanes.

This nuclear option with the ballot initiative to place bicycle lanes above bus only lanes in confronting the climate emergency does not help in the fight.

(Matthew Hetz is a Los Angeles native. He is a transit rider and advocate, a composer, music instructor, and member and President and Executive Director of the Culver City Symphony Orchestra.)