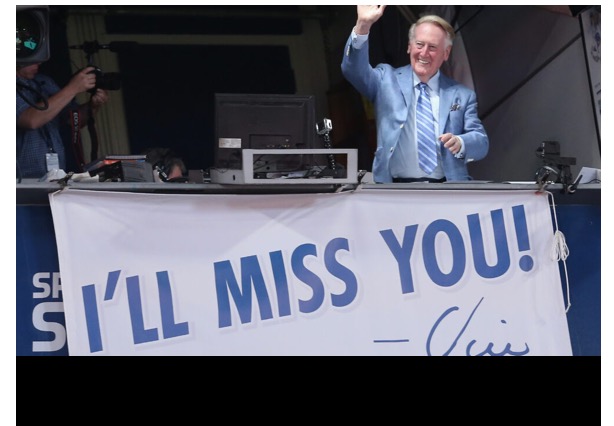 LABOR VIEW - Vin Scully, the Hall of Fame broadcaster, was so adept at painting a picture when describing a baseball game that Los Angeles Dodgers fans sometimes remarked that they didn’t need to see the action on television to know exactly what had happened.

Such was the profound effect of Scully’s voice, delivery and cadence, all fondly recalled upon his passing Aug. 2 at age 94.

Even so, there was a lot going on in those games that Scully never would have bothered describing, for the simple reason that it occurred far in the background. For example:

The players on the field were unionized.

The umpires calling the games were unionized.

The camera crews and those producing the telecast were unionized.

The stadium workers, in concessions and elsewhere, were unionized.

And Scully himself? A union member of more than 70 years’ standing — and awarded for it.

Though it may never be thought of this way, the Los Angeles metropolitan area consistently makes a case for the value and necessity of organized labor. In some instances, that means unions lobbying the city itself to do right by vulnerable groups of workers who are struggling to get by; in others, it means negotiating for the kinds of job protections that Vin Scully didn’t need — but many of his colleagues might.

And occasionally, it means threatening to withhold labor in order to get a recalcitrant employer back to the bargaining table, which is exactly what happened for some 1,500 Dodger Stadium workers on the eve of this summer’s Major League Baseball All-Star Game.

National images of L.A. would never include any of this, favoring pristine (and usually empty) beaches and folks rollerblading down perfect boardwalks as the backdrop to crime shows and sitcoms. It’s ironic, since most of the people involved in the distribution of those images have been union members for as long as they’ve been in the business.

Hollywood may be a dream factory, but it is also a union town. From the Screen Actors Guild (SAG) through the Directors Guild of America, almost every facet of the entertainment industry has union representation: costume designers, makeup artists, editors, stunt performers, writers — on and on.

There aren’t many TV shows about labor groups, but most of those in the business in Hollywood wouldn’t make a move without one. And the power of those unions is seldom in question, as they’ve survived and thrived through decades of industry reconfiguration and consolidation, with many of the largest studios coming under the control of massive media conglomerates.

Scully didn’t begin his career in the West; he was 22 years old when, in 1950, he first broadcast games for the then-Brooklyn Dodgers in New York. (The team moved to L.A. in 1958.) By that time Scully was already a member of the American Federation of Television and Radio Artists — AFTRA, for short — and it was a membership he carried through the decades that followed.

“AFTRA is truly the greatest union on earth,” Scully said in 2009 upon receiving the union’s Media and Entertainment Excellence Award. “I’m so proud to be an AFTRA member, and this honor is very dear to me.”

Scully isn’t exactly a poster boy for union representation, as he earned many, many multiples beyond union scale. He also was a Republican, and “all his campaign contributions were to Republican candidates,” said Peter Dreier, an Occidental College professor who has written extensively about both social justice issues and baseball. “The fact that he was a proud union man may say something about the political and union climate in L.A.”

In 2012, SAG and AFTRA merged, and the joint union has about 160,000 members, including broadcast journalists, actors, recording artists and dancers, among others. Obviously, not all of them live in Los Angeles, but they are a significant force in a metropolitan area in which union representation colors many walks of life.

While it’s difficult to get a precise total of union workers in L.A., the Los Angeles County Federation of Labor, a coalition of 300 labor unions and worker organizations, says it counts more than 800,000 members. That’s a large chunk of the roughly 2.5 million Californians who are either members of or represented by labor unions.

According to the federal Bureau of Labor Statistics, that 2021 figure represented 15.9% of all wage and salary workers in the state. It also continues a trend: Since 1989, when state data first became available, California has consistently run well ahead of national averages of union-represented workers. The state’s union figure was actually slightly higher in 2020 (16.2%), although the BLS cautioned against reading too much into the figures because of the pandemic’s dramatic effect on the workplace.

The entertainment and hospitality industry is at the heart of that union-based workforce, and  includes the glamorous and the not so glamorous. Every time Scully called games at Dodger Stadium, he was virtually surrounded by union members whose names he never recited: concession workers, bartenders, suite attendants, cooks and dishwashers.

The union list also included those whom Scully did mention: every player in uniform. All are members of the Major League Baseball Players Association. When UNITE HERE Local 11 stadium workers threatened to strike during the 2022 All-Star Game unless concessionaire Levy Restaurants got serious about contract negotiations, the MLBPA issued a statement of support, saying in part, “Like thousands of ballpark workers across the country, Local 11’s members are a vital yet under appreciated part of what makes our game great.” (Disclosure: UNITE HERE Local 11 is a financial supporter of Capital & Main.)

“MLB had the first players union contract of any major sport in history,” Dreier said. “The thread of that whole story is about the wider society and union representation.”

That first players union contract was not struck until 1968, decades after the people announcing Major League games – and many of those helping to produce and distribute them – had already joined labor organizations. Now, with the MLBPA firmly entrenched, players in the sport’s minor leagues have begun exploring ways to unionize as well. If they do, they will add to California’s union numbers; the state is home to nine minor-league franchises.

Those are not the storylines that you’ll hear on a Dodgers broadcast, just as you won’t find them embedded very often in Hollywood’s output. In ways that are both visible and not so visible, though, Los Angeles has been — and remains — a metropolitan area significantly built on the strength of union work. It includes the brightest stars, Vin Scully among them.

(Mark Kreidler is a California-based writer and broadcaster, and the author of three books, including Four Days to Glory. This story was published in Capital and Main.)