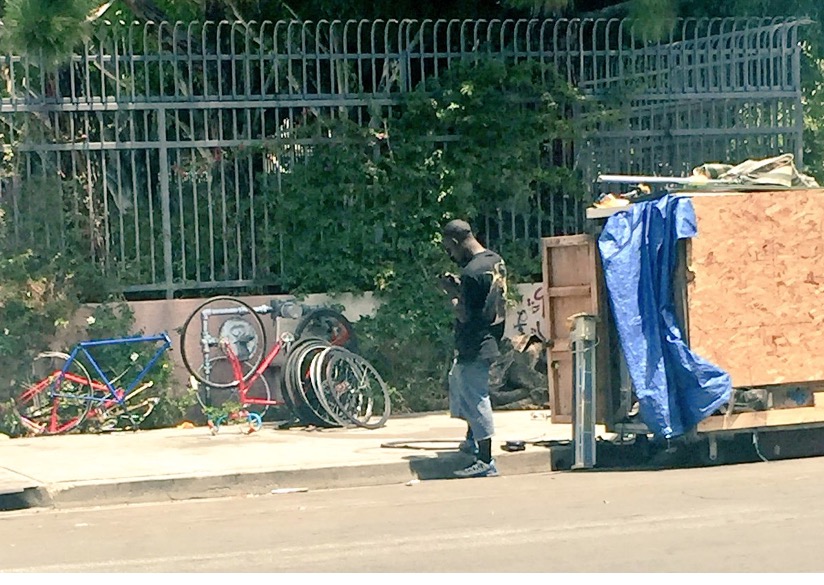 The City Council, by the bare minimum required eight votes, has passed a motion to ban bike chop shops from public parks and sidewalks. This new misdemeanor continues the trend of what some see as the quasi-criminalization of undesirable activities, like homeless encampments, taking place in the public spaces around the city.

Last summer, the City Council added Section 41.18 to the Municipal Code prohibiting camping in certain public right of way spaces. It has now been amended to also include a ban on encampments near schools, day care centers and libraries.

Making the laws is one part of the public safety process. Enforcement is another. The politicos, the police and the city attorney must be in sync.

We live in a politically polarized environment, where the legislative body has created an ordinance that candidate for City Attorney Faisal Gill pledges not to enforce, believing 41.18 to be “unconstitutional”.  He’s pitching that message in his attempt to harvest votes from the defund the police and abolish jails wing of the liberal far left.

Gill, who will be in a runoff with Hydee Feldstein Soto or Marina Torres, has not yet announced his intentions for the chop shop ordinance, but has telegraphed that he will be a lenient prosecutor on many issues.

In his own words, Gill says that “For decades, the LA City Attorney's office has been unacceptably broad in its prosecution of misdemeanor charges. The next City Attorney must take a different approach to enforcing the law. If elected, I will take immediate steps to significantly reduce prosecutions for misdemeanor offenses.”

He continues that “Upon my election, I will institute a 100 day pause in new prosecutions to evaluate the office’s policies related to prosecution.”

He’s also against cash bail, wants to treat juvies as juvies not adults in serious crimes, and eliminating pretrial detention. These are some of the same issues that are haunting progressive District Attorney George Gascon whom voters are trying, for a second time in two years, to recall from office as being too soft on crime.

City Hall has become its own “chop shop”, with the one-two punch  of federal prosecutions for corruption and an expected surge of new council members reflecting the progressive left. Voters and the feds have chopped the heads off of some politicos, transitioning the council from the go-along-get-along club it has often seemed to be to a more representative legislative body with new priorities rooted in social and criminal justice among the progressive initiatives.

Political icon Zev Yaroslavsky made a then bold, but today prescient, forecast after the 2020 elections when a far left progressive candidate won a council seat. Zev called it “a political earthquake” for City Hall. And, he gave a warning: “Anybody at City Hall who doesn’t recognize the significance of this election is making a mistake.”

Nithya Raman (CD4), elected as a Democratic Socialists of America (DSA-LA) candidate in 2020, may now look forward to having a few more DSA-LA endorsed colleagues in the council. They are Eunisses Hernandez, who looks certain to have beaten incumbent Gil Cedillo in CD1 in the primary election, and Democratic Socialist firebrand Hugo Soto-Martinez, if he can unseat incumbent Mitch O’Farrell in CD 13 in a November runoff election.

These DSA-LA wins would account for only a small fraction of the council’s voting power. And, it will require some compromise and a softening of their hard left agenda to make progress on their programs.

But, it’s enough to begin slowly chopping up the council into a slightly more progressive body. In the 2024 election cycle, all of the even-numbered council seats are up for grabs, and the tectonic shift forecast by Zev Yaroslavsky may send some more entrenched council member heads to the chopping block.