The first criticism was that the new Housing Element will not meet its goals because it is based on a regression model that cannot compensate for interest and tax rate changes, recessions and depressions, Pandemics, construction breakthroughs, updated housing policies and programs, and new consumer housing preferences.  By extending previous statistical relationships into the future and then using these extrapolations to determine the City’s housing policies, the new Housing Element is headed for failure.

The second criticism was that the new Housing Element is a Fiasco Foretold because it makes the housing crisis worse.  It will cause transit ridership to further decline, traffic congestion to increase, and climate change to accelerate.  The cure is no better that the diseases it claims to treat.

Nearly two decades later the Los Angeles City Council has only adopted five Community Plans: Sylmar, South Los Angeles, Southeast Los Angeles, West Adams-Baldwin Hills, and Granada Hills.  The rest are either slowly underway or do not even have a start date.

But in order to defeat the Neighborhood Integrity Initiative in 2017, the Los Angeles City Council directed the Department of City Planning to update LA’s 35 Community Plans on a six year cycle.  As a result, the five updated Community Plans are already due for their Council-mandated six-year update.  They would join the 16 Community Plans undergoing their own drawn-out updates.  As for the remaining 14 Community Plans, such as the critically important 21 year old Wilshire Community Plan, City Hall has not posted any start dates.

How, then, will the 2021-2029 Housing Element be implemented, with only half of the Community Plans available for appended up-zoning ordinances under the most optimistic schedules?  Will the five plans due for their six-year update join the 14 old Community Plans waiting for a start date?  Or will they be lumped together with the 16 Community Plans already quagmired in the update process?  If anyone at City Hall knows, they are good at keeping this secret. 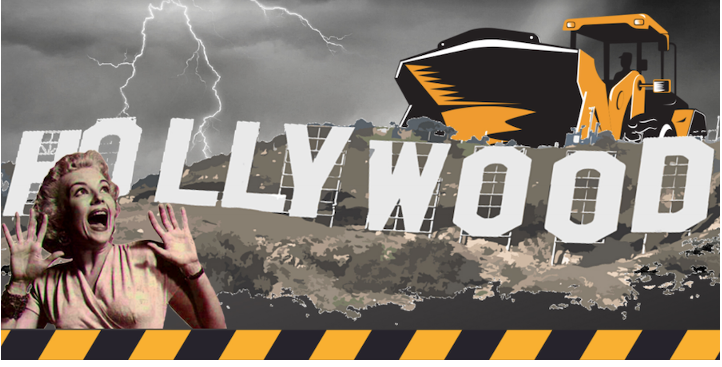 Despite this grandiose boosterism, the long-term trends indicate population decline in Hollywood, despite intentionally induced growth.

The proposed increase in population, housing, and employment in Hollywood not only runs counter to long-term trends, but, like before, it is not based on the capacity of the area’s infrastructure and public services.

“Given the existing deficits in existing pocket, neighborhood, and community parks; the increased demand for such parks; and the severe challenges in the provision of new parks, it is anticipated that the increased use of existing parks and recreational facilities could result in significant deterioration of these facilities. Therefore, the Proposed Plan would result in a significant and unavoidable impact related to existing parks and recreational facilities. This significant and unavoidable impact would also contribute to significant cumulative impacts.”

2-B) The Housing Element’s Policy 121- Re-Zoning indicates that its up-zoning program will largely take place through Community Plan Updates, like Hollywood’s, by appending up-zoning ordinances.  But this implementation program is not matched by corresponding upgrades to local infrastructure and public services sufficient to meet the need of more residents, employees, and cars.

“Policy 121 - The Rezoning Program is anticipated to be implemented through a number of work efforts, including updates to up to 16 Community Plans (four West LA plans and six SE/SW Valley plans, two Downtown plans, Boyle Heights, Hollywood, Harbor-Gateway and Wilmington), two Specific Plans (CASP and Slauson TNP,) as well as at least one citywide ordinance that will create additional zoning capacity through an expansion of affordable housing incentive programs.”

While we wonder how the 2021 Hollywood Community Update has managed to masterfully channel the 2013 legal decision of Superior Court Judge Alan Goodman, we also need to acknowledge its strictly new flaws.  According to Frances Offenhauser, a former LA City Planner who worked on the 1988 plan that Judge Goodman restored, the 2021 version has its own unique shortcomings.

As Hollywood goes, so goes the rest of Los Angeles, when it comes to implementing the highly flawed Housing Element.  Whether the Housing Element flounders because of its own inherent defects or because of the stalled adoption of updated Community Plans, Angelinos should brace themselves for a low-income housing crisis that will get worse.

(Dick Platkin is a former Los Angeles city planner who reports on local planning issues for CityWatchLA.  He serves on the board of United Neighborhoods for Los Angeles (UN4LA) and co-chairs the new Greater Fairfax Residents Association.  Previous Planning Watch columns are available at the CityWatchLA archives.  Please send questions and corrections to [email protected].)