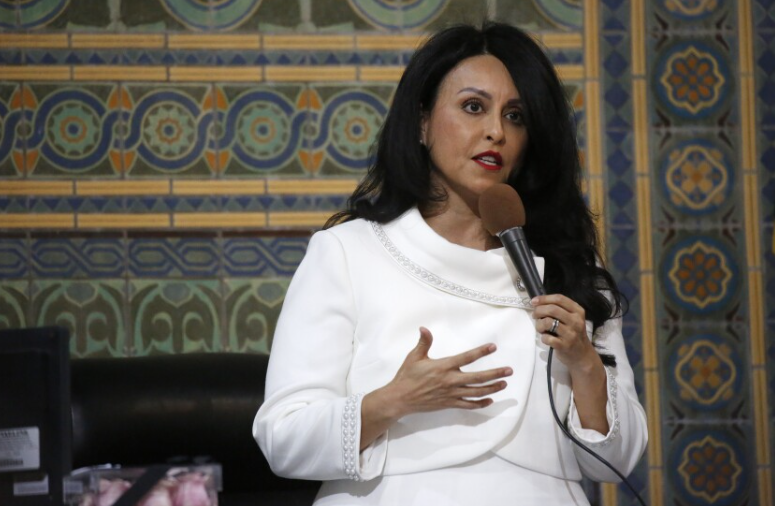 DEEGAN ON LA—The most powerful woman in Los Angeles city politics reaped her rewards on Friday, November 5. It was a landmark day that saw the rags to riches politico (she represents Council District 6 ) wear three crowns simultaneously:

President of the City Council, Chair of the Ad Hoc Redistricting Committee, and Acting Mayor while the incumbent sits through a Covid-isolation in Scotland. As an impoverished, immigrant child she may have barely had one cap.

Whatever jubilation Martinez could have felt had an obverse side expressed by Councilmember Nithya Raman (CD4) who stated just before voting “no” on the redistricting map that “I will lose 40%” of her former territory.

Over the past few weeks Raman had lamented, and ginned up her followers to echo her, that she would be losing 73% of her territory. That did not happen. In the new configuration of her district, which extends from Reseda to Silver Lake, Raman will have to get to know, and win over, 100,000 new Valley constituents who did not vote for her and may not know much about her.

But, it was Martinez who emerges as the biggest winner and metaphorically threw the gauntlet down in front of anyone running for Mayor next year saying “this is me”. Holding what is arguably the most powerful elected political position in the City of Los Angeles, the Council President has shown iron-fist control over process and politicos, each of whom is a duke or duchess in their own fiefdom. But, she’s the boss and there’s now no doubt about that. They will listen to her, and the incoming mayor will need to factor her into their plans.

Martinez flexed her muscles on Friday when she quick-stepped her ad hoc redistricting committee into a vote that brought coveted assets into her CD6 district. They include the Sepulveda Basin Recreation Area—a sports complex that will be the home of some important venues for the 2028 Olympics—and Van Nuys Airport—a $2 billion economic engine for the Valley.

What a week ago had looked like Nury’s “gang of three” has evaporated. Paul Krekorian (CD2) was a fierce attack dog for one day—at the City Hall hearing on whether or not to accept the commission’s map—and then faded away. His bite was subsequently placed in Martinez’ mouth at much lower decibel level. Nithya Raman (CD4), another in the small gang with Martinez and Krekorian, has been dislocated and marginalized.

What does the political future hold for the former gang of three that made the motion to create an ad hoc committee to change what the council’s own redistricting commission had recommended by a majority vote?

Obviously a brilliant constellation of choices, with the sky being the limit, for Martinez.

Krekorian, with termed-out lame duck status, is a lawyer. He staged an aggressive, prosecutorial attack against the commission’s Chair Fred Ali and Commission Executive Director Frank Cardenas on November 2, the day the map was presented to the Council. He grilled them like they were steaks on the fire; he could be an effective District Attorney.

Hit hard is Raman, a political outlier still trying, one year after being elected, to figure out how to fit into retail politics. Her theoretical and academic approach does not leave the imprint of a warm kiss for the public that she must serve. She is no more popular with her council colleagues. An attempt to enter a motion with the ad hoc committee, showing her version of how her district should look, failed to find a second by another committee member and became DOA.

In a recent Zoom call with a homeowner association president that complained that the councilmember had not returned a single phone call or email to her, Raman revealed too much information saying she rarely returns calls or emails from constituents, as if its the job of the people in her office to do that. Speaking in the council chamber recently, Raman shared another of her guiding principles, saying she only wants to hear from people that say “yes”.

Former CD4 councilmember Tom LaBonge, a linear predecessor to Raman, once called a freshly-elected neighborhood council chair at 9 a.m. the morning after the election to say congratulations and here’s my private number to call me whenever you need my help. An hour later, his chief of staff made the same call. An hour after that, the field deputy assigned to the NC repeated it. That was the energy and tradition of CD4 constituent service that LaBonge inherited from the legendary John Ferraro and passed onto Raman’s predecessor David Ryu. The link to many CD4 constituents was broken when Raman became the councilmember.

A community leader, in a community that may no longer be represented by Raman, provided an epithet and prescriptive observation, saying “I feel a bit sorry for Raman. She did not realize she was tangoing with ruffians and pickpockets. I think her arrogance and self-regard (for her Harvard/MIT pedigree) blinded her to reality. They do not need her votes. Kind of sad, really.  But she might have thought about not alienating all of her constituents, and firing Mike Woo, before she embarked on this path.”

Now, Raman will have 100,000 new constituents to win over or alienate. Flip a coin; it could go either way. As for Nury Martinez, it’s her face that’s now on the political coin of the realm.